With four Gates to close today, I skipped on a lot of sleep and left the Imperial Bridge Inn at one in the morning. My record until today was two Gates in one day, but I felt confident that four was possible if my equipment lasted.

It has been long since a single Gate is worth much of a mention and like the House Dagoth strongholds of years ago, familiarity bred contempt and I can only see the Oblivion Gates as one might see a particularly loathsome, but not difficult, chore. My early start meant that I was able to clear all four Gates along the road to Cheydinhal by nightfall and reached the city by moonlight anticipating a pleasant rest. But a fifth Gate awaited me there, this one with a story.

The Gate was Cheydinhal's own and Cheydinhal's own had gone into the Gate in an attempt to close it. The son of Count Andel Indarys ventured into the Gate alongside his personal warriors known as the 'Knights of the Thorn'. The city guard had set up a barricade around the Gate while they waited for the Count's son, Farwil, and his Knights to return. But they had entered the Gate days ago and nothing, neither man nor Daedra, had come back out. The guardsmen were content to stay outside and ensure no Daedra attacked the city, but it was up to someone else to close the Gate and find the Count's son.

Naturally this task fell upon me. 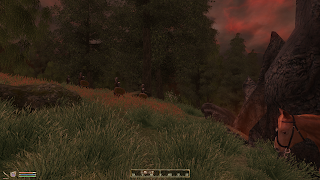 I spoke with one of the guards before entering the Gate. His opinion of the so-called Knights was not high, for they spent most of their time at the Inn drinking and telling each other increasingly outlandish stories of their exploits as the drink took hold. Actual work such as patrolling the city or the surrounding wilderness fell to the city guard alone. The guard suspected that Farwil and his men died days ago in Oblivion, but I promised to do my best to get them out should I find anyone alive.

My first steps into Oblivion did not lend any encouragement. 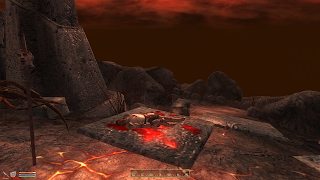 The Knight had fallen just inside the Gate, his woefully inadequate steel armor rent by claw marks, probably Clannfear. Further ahead I came upon two more bodies, both freshly killed, more of Farwil's Knights of the Thorn. The complete lack of Daedra corpses did not bode well for the Knights I had yet to find.

Interestingly, the Gate had led me to an area of Oblivion that I have never been in before. This area was dominated by a massive keep built atop a lake of lava. It was an impressive sight. 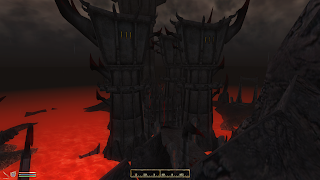 Farwil was considerably less impressive. Upon seeing me he immediately demanded to know what took me so long and bragged that he and his knights struck against the forces of Oblivion like lightning. He failed to mention the dead he had left behind him on his noble quest and insisted that I follow him onward into the Oblivion keep. He claimed to have personally killed over twenty Daedra, but the lack of even a single Daedra corpse on my way to him made that claim more than a little suspect.

With him was a slightly more level-headed Knight who introduced himself as Bremman Senyan. He was not too proud to admit that he was afraid, but he gamely had stuck with Farwil up until my meeting with them and continued to follow the headstrong youth until the end of this tragic tale. He deserved a better end than what he got.

The only way into the keep was via a stone bridge spanning lava field between the hillside we were on and the keep's entrance. Three Dremora were milling about, guarding the keep and the body of a dead Knight of the Thorn held testament to the battle I was about to face. 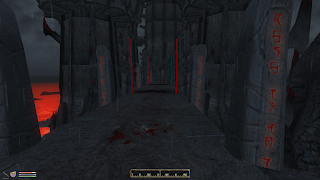 I tried to get Farwil and Bremman to wait while I cleared the bridge, but Farwil would have none of that. Wounded though he and his friend was, with a shout of "Huzzah!" he charged down the bridge with his last living Knight following in his wake. I myself was barely able to engage the Dremora before him, but I managed to draw their attention before they noticed Farwil, allowing him and Bremman to strike from behind. The bridge guards were vanquished in short order, which only served to further fuel Farwil's lust for battle.

We fought through our way up the keep, Farwil constantly getting in my way and Bremman always trying to reign his young lord in. Still, the two of them managed to hold their own right up until we reached the Sigil Stone's chamber. Sighting three Flame Atronachs, Farwil, wounded as he was already, charged...and fell to three fireballs he never attempted to dodge. 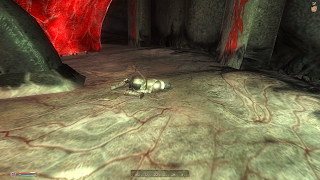 Bremman wisely stayed behind me as I dispatched the Atronachs and he handed me Farwil's signet ring to bring back to the Count after the battle was over.

After closing the Gate I spoke with the guardsmen again who told me that the Count was requesting my audience personally, no doubt to hear news of his son. Bremman and I parted ways and I headed towards the castle, he alone to the Knights' lodge.

The Count was oddly cheerful for a man who had just lost his son to the forces of Oblivion. He commented that he was sure I tried my best to save him and that he was sure that I had fought at his side before his end. He awarded me a sack of coins for closing the Gate and asked that I keep Farwil's ring as a memoir of his son's fateful battle against the forces of Oblivion. What else could I do but agree?

It is now early in the morning of 3 Frost Fall and I am turning in to bed for a short nap. I wish to be on the road this afternoon towards Bruma to deliver my Daedric artifact to Martin and be one step closer to ending this business with Oblivion.
Posted by Raifield at 7:00 AM
Labels: Day 35, Oblivion