Before leaving Bravil for Leyawiin I owed a woman my attention in finding out what happened to her husband. I had promised Ursanne some time ago that I would investigate the disappearance of her husband, but became caught up in recent events before I could give the matter the attention it needed. The only clue I had to go on was that the man had racked up a large amount of gambling debt and borrowed money from a local Orc, Kurdan Gro-Dagol before disappearing some time later.

Like most of his kind Kurdan was mean-tempered and unfriendly. It took a "gift" of two hundred Septims before he would talk to me about Ursanne's husband Aleron and even then there was a condition I had to first meet. Kurdan told me that I would have to go to a nearby island to retrieve a family heirloom from the depths of the ruined Fort Grief. Kurdan provided a small rowboat for me to use and I wasted no time in getting to the island and off my small, unstable vessel. 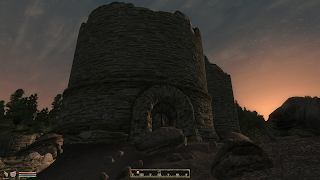 But the story about the heirloom was a trick: Aleron was inside the fort, despondent and informed me that he had been tricked the same way, having been told that his debt would be erased in exchange for the heirloom. The fort was really Kurdan's arena, he tricked people into descending into the ruins where they were hunted by perverse noblemen and rich merchants looking to hunt the most elusive game: other people.

Understandably Aleron was reluctant to go into the watchtower, but I was feeling a great deal more confident. Escaping the island was impossible, for the gate out of the tower was locked as soon as I stepped through it, but Aleron suspected that the "hunters" would had keys to freely come and go. Acquiring these keys became my, well, only priority given the situation. 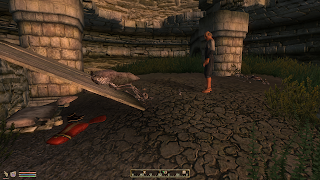 Unfortunately for Kurdan, his so-called hunters were only murderers, not warriors. Against a skilled opponent such as myself they stood little chance. Each of them had on very expensive Mithril armor and one had even been wielding an ancient Elven short blade, but it appears that they valued the equipment more for the status rather than the function, for they were mediocre fighters and each fell quickly, surrendering his key in death.

When I returned to the surface Kurdan was waiting for me, having just finished killing poor Aleron. 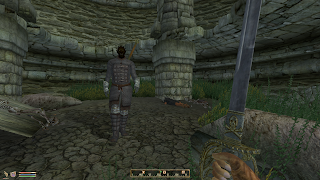 He bragged that the deaths of his clients meant little to him, for there were always more rich folk looking to participate in his "game". With that bit of bravado, he pulled the war-hammer from his back and charged.

The battle was made a great deal more difficult by a friend of his who attempted to skewer me with arrows while Kurdan was trying to smash me into the ground. I managed to maneuver us into a corner of the tower where a fallen column afforded me protection from the arrows and the closer confines worked against Kurdan's two-handed weapon. When Kurdan finally fell, the archer dropped his bow, drew an Elvish dagger, and charged much the same as Kurdan did. But the archer was Khajiit and lacked the weapon and body mass required for that charge to be effective. I think I will be keeping the dagger.

Aleron's widow seemed satisfied that at least his murderer had been brought to justice. She gave me a book as a reward, stating that Aleron had always been meaning to sell it, which is likely what I will be doing with it. With that tragic business concluded I set out for Leyawiin and whatever Gates awaited me there.

Only one Gate was waiting for me nestled in the woods across from the city and I had more than enough time in the day to close it, so in I went! 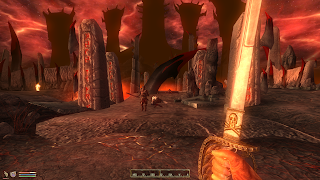 Evidence that I am not the only one assaulting the gates was present in this little pocket of Oblivion. A body charred beyond recognition lay next to the corpse of a horse, with a melted and twisted sword between the two of them. This particular Gate was swarming with Fire Atronachs whom collectively gave me more trouble than I have had with most Gates, but thanks to a scavenged Fire Shield potion I emerged victorious, if a bit singed.

I have yet to uncover the Mythic Dawn agent at Leyawiin, but as it seems I need only be seen to instigate a foolish attack, I will spend tomorrow simply walking around at my leisure, finding out what I can about Daedric shrines.
Posted by Raifield at 7:00 PM
Labels: Day 32, Oblivion