I barely slept last night despite the considerable comfort of the Grandmaster's quarters, too excited to finally march with the Dawnguard against the deadly, but misguided, vampires of Castle Volkihar. My excitement, however, is less to do with the Dawnguard's cause and more for being done with them entirely. Serana, too, was eager to leave early, no doubt for the same reason.

The only saving grace of the taking the eastern path from Winterhold to Windhelm is that no one else is masochistic enough to want to. The trip has the resilient traveler buffeted between winds screaming at her from the mountains at her right and a constant barrage of icy slush from the sea on her left. This continues even as the road does not halfway to the city, leaving you searching for a few Septims to pay for a local fisherman to ferry you from your side of the city's river over to the civilized side containing a road. It is an uneventful, miserable path. 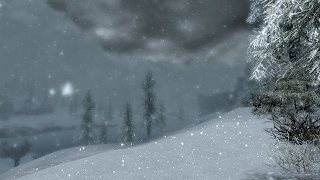 A few Septims poorer, Serana and I set foot on the opposite shore and continued along the mountainside. Taking the road to Riften is easier, but slower and I feel both of us are in agreement that the quicker this is over with, the better. 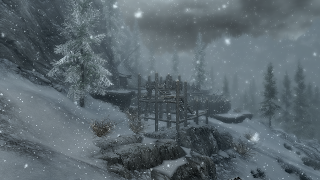 We came upon an Orsimer fortress and I made to pass it by, but Serana wanted to stop to barter for some furs, her family's raiment being ill-suited for the cold. Inside we found few furs for the fortress protected a mine dug into the side of the mountain, providing the Orsimer with all the wealth they needed.

But the Chief gave me a tale of woe no wealth could alieve him of: every wife he has taken dies soon after, none of them providing him a son. He asked that I inquire about an 'Uglarz', a childhood friend of his whom he, for some reason, thought would make a good wife. Why he thinks Uglarz is still in Skyrim and also why she would consent to marry him (if she is not married already!) is certainly unwarranted optimism. At least the conversation gave Serana enough time to buy her pelts.

A Dragon roared over top our heads as we were leaving and we rushed back into the fort to prepare to battle alongside the Orsimer. But after roaring a bit more the Dragon flew back over the mountain to wherever it was calling home. They have been less aggressive as of late, though no less advertising.

We arrived at the entrance to Dayspring Canyon by mid-afternoon and did not experience the ambush we were anticipating.

Isran was more awed by seeing Auriel's Bow than I thought the dour man was capable of. He questioned whether Serana could be trusted in the battle ahead and I assured him she was just as eager to see Harkon de-throned as any one of us...possibly even more. He nodded once and turned to the assembling soldiers of the Dawnguard to address them. 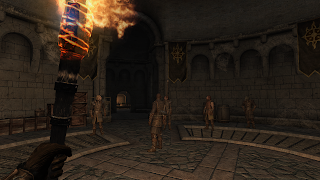 The speech was the typical "This is our hour!" sort of thing, but the soldiers seemed to have appreciated it. I thought Serana and I would be traveling with them, but as the Dawnguard began to file out Isran turned and told us to meet them all at Castle Volkihar. Apparently we were to travel on our own.

So on our own we were, once again. We trailed behind the Dawnguard until Riften, where they turned north and we proceeded west, the more direct route. Isran is probably counting on stopping at Windhelm, Whiterun, or Solitude for supplies along the way.

While navigating the now-dark and icy pass between Ivarstead and Helgen we were accosted by a traveler in the escort of several mercenaries. The traveler introduced himself as 'Taron Dreth', an eminent scholar on the subject of Aetherium, or so he claimed. Recognizing my circlet as being of that metal drove him into an unexpected rage, attacking us along with his rather docile guards. 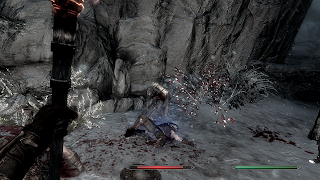 I will never understand why people are so eager to chance their lives over such petty things. 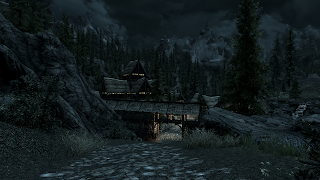 The ambush we had been expecting at the entrance to the valley came nearly seven hours late and half a province to the west: a Vampiress and a gargoyle jumped out of the woodland as we approached the gate of Falkreath. The gargoyle was a surprise, though not an overly dangerous one.


We shall be at Castle Volkihar tomorrow and, for good or ill, this business of the Dawnguard will be concluded.
Posted by Raifield at 7:00 PM No comments:
Labels: Day 84, Falkreath, Narzulbur, Skyrim, Winterhold
Newer Posts Older Posts Home
Subscribe to: Posts (Atom)