I knew the Imperial Legion's garrison for the Pale lay directly west of Dawnstar, having stumbled upon it earlier, which meant I was either in for a very long walk along the roads or a long walk across the swamp of Morthal and the snow of the Pale. I chose the latter.

A bandit tried to waylay me as I stepped out of Mortha's freezing sludge. He came at me with a standard-issue Legion blade and appeared to be cloaked in furs. I met him with my ebony battle-ax, expecting a quick end to the confrontation.

But my first blow to his midsection cut through the furs, then glanced off something underneath. My surprise must have been evident, for he laughed and pressed his attack. Clumsy as it was, it forced me back a few steps, giving him the illusion of an advantage. I got in a few more strikes against his chest, all with the same result. So I finally hefted my weapon in two hands, one just underneath the head, spun it around, and drove the spiked counter-weight into the side of his neck. Brutal, but efficient.

The cause for the ax's lack of expected performance proved startling. Underneath the man's cheap furs was a pristine ebony breastplate inlaid with silver. It would have purchased a sizable home in any of Skyrim's cities or a large farm outside of it, I am sure. How he came upon such valuable armor and why he continued his banditry afterwards? I will never know. 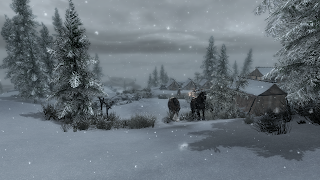 I reached the Imperial camp at the Pale without any other perplexing incidents and found, as expected, that the Legate had arrived before me once again. She must have let the Legionnaires know to expect me for I was waved through the perimeter with barely a glance. 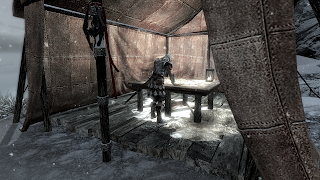 She was poring over one of the identical province maps anyone with a rank in Skyrim possessed, each city and fortress marked with a blue or red flag to denote ownership. Hearing me approach she turned, tapping a flag near the camp.

But her orders had little to do with the fortress pinned to the map. Instead I was to travel along the road to Windhelm to intercept and eliminate a Stormcloak courier and bring the orders back to the Legate. She would forge new orders more advantageous to the Legion, after which an attack on the half-ruined Fort Dunstad would be made. More devious than I expected, to be honest.

A courier running between Windhelm and the fort or Dawnstar would pass Nightgate Inn several times a day. Surely anyone would succumb to the temptation to stop in for a mug or bite to eat. Having encountered no one on the road between the Imperial camp and the Inn, I stopped in myself to have a word with the innkeeper.

He was unwilling, at first, to answer my questions, but coinage makes for a persuasive argument. Four hundred Septims temporarily swayed him to the Imperial cause and I was told the courier had left the inn maybe ten minutes prior in the direction of Windhelm. I thanked him and left immediately. 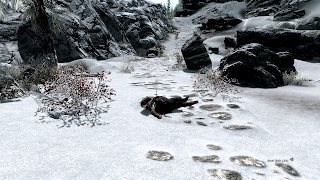 Stealing the orders was rather anti-climatic. I shot the courier in the chest from far enough down the road that I suspect he never saw who killed him. The orders were sealed with wax and I suspected the Legate would want to open them herself, so I pocketed them and began the walk back to the camp.

The sun set as I walked back to the camp, but the Legate was pleased by the timing. She took the sealed scroll, carefully broke the seal, and scratched out some of the words. Having modified the orders to her satisfaction she warmed the wax seal and pressed it back onto the scroll. It was handed back to me with orders to carry it to the Stormcloak commander in Dawnstar.

If the Legion knew where the region's commander was, why not simply eliminate the man? I appreciate the subterfuge of the modified orders, but a dagger can be equally subtle. But all I could do was take the false orders and proceed across the icy hills into Dawnstar.

Stormcloaks do not think much of security, it seems. I was able to walk right up to Ulfric Stormcloak, leader of the rebellion, without an introduction or a blade at my back and the Dawnstar Stormcloaks showed no reluctance to give me accurate directions to their commander. It all felt very strange.

The commander, whose name I do not remember, hardly made an impression. He was dull-eyed and dull-witted, throwing me five coins for my "work". He never asked why a Khajiit was couriering Stormcloak troop movements and no one else in the room seemed bothered by that either.

He did ask why I was not wearing my Stormcloak uniform, a question so stupid it took me a moment come up with the excuse that ditching it made it easier to travel the roads. The Legate had said the courier made multiple trips between Dawnstar and Windhelm per day, yet he fails to show and no one asks why. Also, how many Khajiit are with the Stormcloaks? I am willing to bet my Solitude manor that the answer is "zero". What a stupid man.

So again I returned to the Legate and again received further orders: join a group of Imperials along the road to Fort Dunstad and assault the Stormcloak garrison occupying it. The group wound up being five soldiers, none of them Nords. We had to keep to the road due to their inexperience, but the night hid our approach until one of the Imperials, unbidden, drew his bow and shot a Stormcloak lookout.

The battle went just as unplanned as the approach. Alerted, the Stormcloaks rallied to the walls, but the Imperials' heavy armor deflected the homemade arrows. The gatehouse had no gate, so we charged into the courtyard, the Legionnaires staying together and eliminating the Stormcloaks closing in with axes and hammers, I springing up on to the parapet to take out the archers.

As usual the Stormcloaks attacked by ones and twos and were quickly overwhelmed by five blades working together or one Khajiit wielding spell and battle-ax. At some point the Imperials fought and defeated the Stormcloak commander, the rest of the survivors either surrendering or fleeing down the road towards Windhelm. 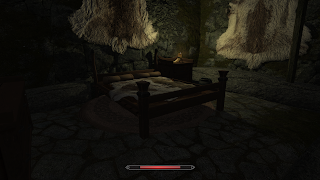 The fortress is under Imperial control now, but "now" is about one in the morning by the moon. I could walk back to Dawnstar or the camp, but I happened to find the key to the former commander's quarters and will be spending the morning here before reporting back to the Legate and the General.
Posted by Raifield at 7:00 PM 1 comment:
Labels: Day 93, Fort Dunstad, Skyrim, Solitude, Whiterun
Newer Posts Older Posts Home
Subscribe to: Posts (Atom)