Waking at Ivarstead meant one was either on her way elsewhere or preparing for a walk up to High Hrothgar. For myself it was the latter, but as I reviewed my list of tasks, I realized that the final fragment of Gauldur's amulet was right next to Ivarstead on a small island sitting amid the lake. Expecting nothing but Draugr, I thought retrieving the fragment would not take much time and chose to do that first. 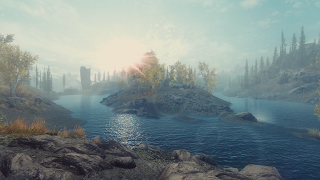 I was not the only one interested in completing the amulet. Inside the tomb lay the mostly-eaten corpse of a Nord, next to which a family of Skeevers had set up a den. After disposing of the vermin I noticed a copy of 'Lost Legends' in the nest of refuse, the book that likely drove the hopeful man to the cave in the first place.

Unfortunately the only exit from the room that I could find that was not leading back to Ivarstead was a pit next to the dead man which ended at a very cold. small lake some twenty feet below. It was deep enough to prevent injury and faced a door common to the Nordic tombs scattered around Skyrim. 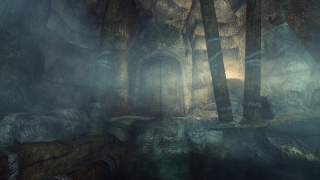 The tomb itself was not very interesting. As I thought, I faced Draugr and some spiders, though a puzzle gave me pause for some time. The walls along a staircase leading to a burial room were lined with four animal motifs and I knew to look for the rotating pillars in the room to match them to. But the motifs were in two pairs, one on each side of the wall. It took time to guess what order the motifs needed to be arranged in and took more time and effort than the Draugr lord I encoutnered further inside.

Before him though I came upon the dessicated corpse of 'Lord Gerimund', the court mage of Windhelm at the time of the three brothers' rebellion. According to the book, Lord Gerimund and a host of warriors was tasked with tracking each of the brothers down  and this he did successfully, slaying each one. The death of the third brother, Sigdis, also resulted in the death of Gerimund, after which he was evidently buried with Sigdis as a sort of guardianship. 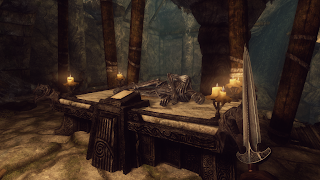 I expected the former mage to rise and attack me as I passed his bier, but his corpse was merely a corpse and I left him to his rest.

Sigdis himself lay in state in a watery chamber with two pedestals. As expected, he burst out of his coffin dramatically, flinging the stone lid against the cavern wall with a very solid-sounding crunch. 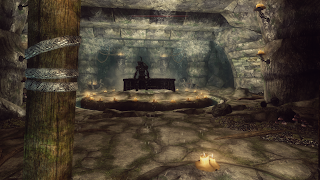 He had a little trick, teleporting himself around the chamber as he summoned two identical Draugr to lob arrows at me. But I had a trick of my own: Vokun's staff of fireballs which I had derided as useless. The burial chamber's small size meant that one blast from the staff nearly always hit Sigdis and his minions, making the battle very short-lived. I claimed the third fragment of his father's amulet, though I do not recall what I am supposed to do with the three pieces. It can wait.

Having finished with Gauldur's traitorous sons, I had only to walk back up to High Hrothgar, suffering blinding snow and stinging ice while under attack by bears and trolls. For such an important place there seems to be no interest in any sort of patrolling to keep the path safe for travelers.

No one answered my knocks, so I let myself into the Hall where a Greybeard was silently meditating, oblivious to my arrival. 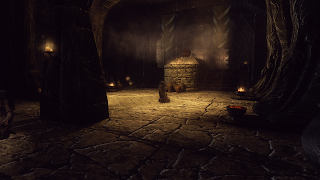 After tracking down Arngeir, the only Greybeard who actually speaks, we all congregated in the Hall, the solemn monks surrounding me as Arngeir warned me that they would speak the required ritual in the Dragon tongue. My surviving this would prove I was the true Dragonborn.

What followed was one of the most painful experiences I can remembering suffering. Their words sounded to me as utter nonsensical moaning, but each syllable felt like someone had hit me in the head with a hammer. 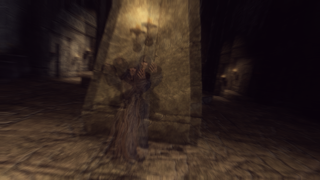 When they finished I could not tell if twenty seconds had passed or twenty minutes. My head was pounding, my ears ringing, and my fur was refusing to relax. I must have been quite a sight. As a consolation I was taught 'Dah', the ancient word for 'push'. With that I can use my "voice" as a bludgeon against my enemies, but having suffered that already I believe a knife in the gut is a more merciful choice.

With nothing else to do there and no place to sleep I had to descend the mountain at night, slipping on ice and nearly falling over the side several times. Eventually I made it back to Ivarstead in one piece and handed over another ten Septims for the inn's bed. Tomorrow I think I shall try to find the remaining pieces of Mehrune's Razor so that I can bury it somewhere, then do what research I can about Gauldur's amulet.
Posted by Raifield at 7:00 AM No comments:
Labels: Day 60, Ivarstead, Skyrim
Newer Posts Older Posts Home
Subscribe to: Posts (Atom)