It appears that my previous journal entry was too optimistic, for we have settled in for the night at Dragon Bridge, still quite a distance from Castle Volkihar.

As usual we left just as the sun was beginning to rise, confident that we would be masters of Castle Volkihar before night. We were careful to stay on the road and were delayed only by a Bosmer Skooma dealer who foolishly assaulted us and an assassin of the Dark Brotherhood, only slightly less foolish. 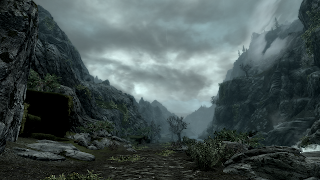 The day had started grey and remained grey, making for a rather morose trip, even given our anticipation of being done with the entire Dawnguard-Volkihar feud. A little while after the assassin it even began to rain, which Serana remarked as having not happened since the two of us met. Skyrim seems only to provide, in my opinion, days separated by having snow and day which do not, so I will have to take her word on this.

We arrived at Dragon Bridge before night and could have possibly made it to Castle Volkihar before midnight, but Serana reminded me that the night is not a good time to engage vampires, especially a castle full of them.

I expected Isran would have left a message somewhere along the way for me, but it appears his party traveled the north road, Serana and I the south, so if there were any I have missed them entirely. I may briefly stop at Solitude tomorrow just in case, that is the last settled stop between Fort Dawnguard and Castle Volkihar.
Posted by Raifield at 7:00 PM No comments:
Labels: Day 85, Dragon Bridge, Skyrim
Newer Posts Older Posts Home
Subscribe to: Posts (Atom)