Serana and I left Winterhold's inn early enough, I hoped, to reach Solitude by mid-afternoon. Early though it was we exited the Inn to the sounds of running feet and Nordic swearing. 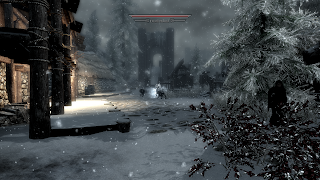 Another vampire attack, this one with the benefit of the giant undead hounds the vampires seem to favor. Fortunately for us, the attack was nearly over, only two hounds remained of the raid and both were quickly dispatched. Almost immediately the victorious guardsmen began arguing over who won the rights to the hounds' silver collars and Serana and I were able to slip out of town without a notice...precisely the reason I usually spurn the College's superior accommodations.

The sky was the usual featureless grey and the snow, as it always does along the coast, fell incessantly. Seeking to trade comfort for privacy I chose to travel along the shoreline rather than the road in order to avoid the assassins, cultists, Dragons, bandits, and vampires that all appear to have an interest in one Khajiit. If Serana had any complaints she uncharacteristically kept quiet.

While trudging along the shore we passed a "hidden" shrine to Talos, the God outlawed by the Thalmor. The shrines are not particularly hidden, I cannot help suspect the Thalmor leave them standing to easier discover and ensnare Talos worshipers. I do recall one Thalmor agent for whom that strategy went awry, though I cannot remember his name. 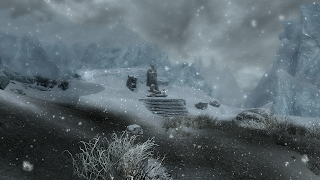 My plan to avoid unwanted attention worked, almost to a fault. After two hours of walking we were halfway between Dawnstar and Solitude with no more excitement than an excessively-territorial Horker.

Unexpectedly the weather cleared as we arrived underneath Solitude, giving us a rare view of Skyrim's elevated capital city. 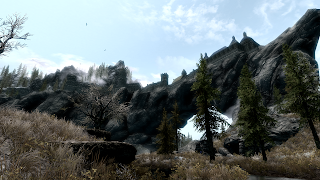 I felt that if we stopped inside we would not be leaving until tomorrow, so we pressed on through the marsh of Morthal and sought to take the bridge across the river, just before Dragon Bridge. A foul Orsimer clad in ancient Dwemer armor stopped us at the bridge, demanding a toll, a battle, or a shameful retreat. I offered battle. He had an Ebony Shield and I was tempted to carry it to my home in Solitude...but I did not. Feeling mischievous, I hid it underneath the bridge instead. Perhaps some adventurer will find it one day.

What remained of our walk in Skyrim was uneventful and the weather remained clear all the way to the jetty across from Castle Volkihar. I had to row, of course. 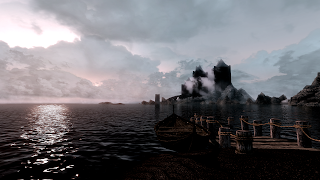 Snow began to fall midway to the island and by the time the boat scraped on to shore the sky had taken on its usual featureless grey along with a heavy snow. It fit the mood for what the castle had become, but Serana was uneasy at being back on the island, urging me towards the rear of the island. 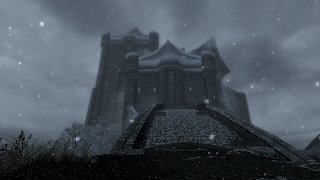 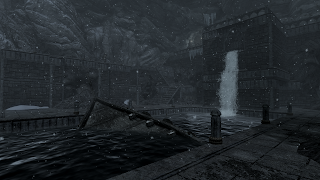 I was expecting a hidden door behind some bushes, but Serana assured me that the castle dock had not been used in several hundreds of years...which I find to be rather implausible. Even vampires need to eat and drink, after all. Am I to believe they row each of their victims across the water themselves?

We easily dispatched the skeletons left to guard the ruined dock and entered the castle's undercroft. The experience was not unlike any of the other crypts dotting Skyrim. The Gargoyles stalked the ruins in place of Draugr, but at least they had decorum enough to have gemstones for eyes. I rarely get such consideration from the undead.

After some wandering (Serana could not remember the way) we emerged from the castle crypt into a dilapidated courtyard dominated by a forlorn-looking moon-dial. There were circular platforms surrounding the dial, each depicting a phase of the moon via some sort of milky gemstone. Serana pointed out that several of the phases were missing, but we did not think this important until several minutes of searching revealed no way out other than how we came in.

More searching ensured, Serana assuring me only she and her mother ever went into the courtyard, so the missing phases was no doubt intentional on the part of her mother. I thought it cruel to point out that she had been sleeping for quite some time and things change, so I kept my mouth shut and my eyes open. Soon the wireframe-set gemstone moon phases were in my possession and I set each down around the sundial in the proper order. 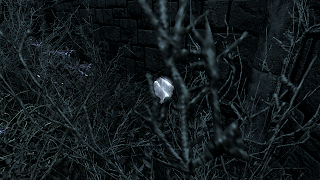 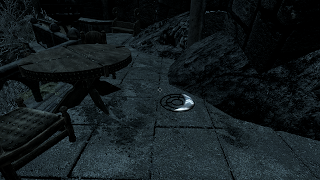 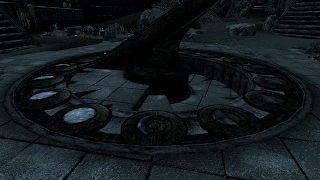 As soon as I set the final phase in its place the moon-dial collapsed into a stairway. Serana excitedly exclaimed that it was exactly what she expected from her mother, but once we descended the sudden stairwell we found the secret underground area well-lit with candles and slippery with fresh blood. Someone was using the hideaway, but we never found out who. 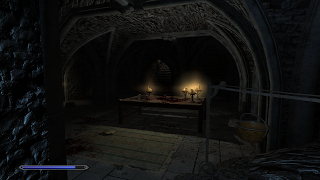 Gargoyles stalked the halls as well, but they are much more fearsome-looking than they actually are. We passed several statues of Mara, making me wonder what Castle Volkihar was before it became a vampire den. 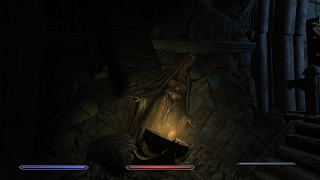 Onward we crept, most of the rooms were dining rooms of one kind or another, which I thought a bit strange. Eventually we reached what looked like a dead end: a room with one door, the one we entered through, and nothing else. Serana thought there should be a secret passage somewhere in the room and I thought so as well, though I kept that to myself. 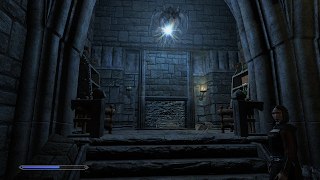 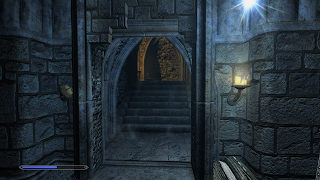 We were correct. The passage was the classic behind-the-fireplace wall panel. I discovered it before Serana: nearly every candle we had passed had been lit, for some reason, but the fireplace was flanked on both sides by two platters of wall-hung candles, only one of which was lit. The second served as the lever to open the wall panel that led to the Serana's mother's laboratory...and the portal to a land I wish I had never set foot in.

But it is late now, so I am finishing tonight's entry here. I plan on doing nothing tomorrow save for recovering from this awful journey and will conclude this tale then.
Posted by Raifield at 7:00 PM No comments:
Labels: Castle Volkihar, Day 79, Skyrim, Solitude, Soul Cairn
Newer Posts Older Posts Home
Subscribe to: Posts (Atom)