Apparently I already have a reputation at 'The Bannered Mare' as a Khajiit who enjoys performing the city's odd-jobs. Last night Hulda told me that the priestess of the local temple of Kynareth was looking for a mercenary and though I had promised myself yesterday to not push myself too far too quickly, I decided that speaking to the woman was the least I could do.

Whiterun's priestess is 'Danica Pure-Spring', a very Nordic-sounding name. Her task was a bit unusual: part of her responsibilities includes the tending of 'Gildergreen', the large dead tree outside the Temple. I took it for any other sort of tree, but 'Gildergreen' is a sacred tree to the worshippers of Kynareth and its present state was something of a disgrace to the Temple. In healthier times pilgrims would travel to Whiterun to meditate underneath its leaves and hear the whispers of their Goddess in the winds between the branches.

Or so Danica said. The tree was struck by lightning awhile ago though and with the wounded streaming into the Temple due to the civil war she has not had time to dedicate towards the rebirth of 'Gildergreen'. This was to be my task. If I accepted, the first step towards restoring 'Gildergreen' would be to fetch the sacred dagger 'Nettlebane' from a nest of Hagravens the locals had named 'Orphan Rock'.

I had no experience with the creatures known as Hagravens and what knowledge I had of them came from stories and the occasional rumor of a sighting. From what I knew of them before speaking with Danica, they were witches, usually Nords, that accepted a transformation into half-woman, half-bird in exchange for potent magicka and ritualistic abilities that were revered by the non-transformed witches and the Forsworn. They were said to be fierce defenders of their "nests" and skilled opponents both at range and up close. Given that, I was hesitant to accept Danica's request, but I did under the self-imposed condition of getting myself some training immediately after I was done.

Danica gave me directions to 'Orphan Rock': follow the road east out of what used to be Helgen and look for the Hagraven's nesting site within the second canyon on the left side of the road. Simple enough. The trip took me back through Riverwood, but not much of interest was happening at the town. 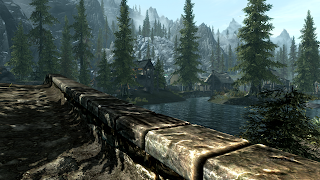 Along the road between Riverwood and Helgen I overtook a band of Stormcloaks, but they paid me no more notice than a glance.

Helgen had new inhabitants and they decorated the main gate with totems of their presence: an impaled corpse (burnt, most likely from Helgen) and a skull with attached rib-cage affixed to a second stake, these also likely taken from Helgen itself. Thus helpfully warned, I pushed open the gate, bow at the ready. 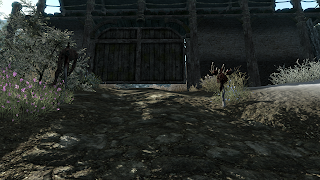 I expected more, but there were only three bandits wandering around Helgen. Perhaps they were the first of a larger group to arrive or maybe they had aspirations of becoming more than they were. Whatever the case, their aspirations ended with arrows embedded into their backs as I caught all three unaware and slew them without warning. They had nothing valuable to speak of and the remainder of my walk to 'Orphan Rock' was without incident.

Once I reached the second gap in the hills along the road I did my best to creep silently into the campsite, but sneaking has never actually been my best skill and I soon found myself dodging fireballs as the witches of the Hagraven's nest descended upon me.

Using my bow would be the obvious choice, but despite my victory over Helgen's would-be bandits, my ability with it is not great. Against the constant barrage of fire I found it difficult to draw an arrow against any of the witches and instead relied on my sword-arm and agility to rush them in the hope of preventing their spell-casting. It was a hazardous strategy, but it worked after I was singed a few times. Once I was able to engage them with my sword and shield they fell quickly. 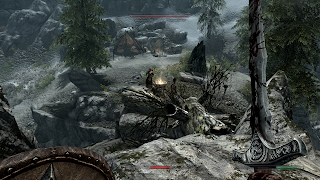 Their Hagraven was a different matter altogether. My first impression of it was that someone had taken a very old woman and mixed it with a crow...hence the name Hag-raven, I suppose. The "woman" looked to be very old, but her hands were a bird's claws complete with feathers and her feet were the same. I cannot imagine why one would surrender their body to such a horrific and ugly transformation, but there must be those that are desperate enough for power or status of some kind.

Fighting her though turned out to be a lot easier than I anticipated. Her magicka was far stronger than her witches' had been, but after I closed to melee she relied on her clawed hands to attack me with. Fighting her was very similar to the Corpus monsters from so long ago: powerful blows, but very slow and easily dodged. The Hagraven was not a clever combatant and was satisfied to simply trade blow for blow. My sword was not very effective against her unarmored body and after the battle I realized her skin was tougher than a stack of deer hide. Still, I kept up our little dance long enough to wear her down by dozens of minor wounds and was victorious, though exhausted. Tied around her waist was a cord with an ebony dagger attached to it which matched the description I had been given of 'Nettlebane'. 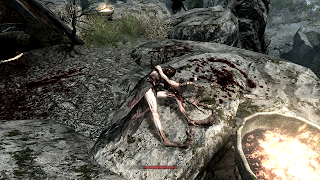 The campsite had a small enchanting table set up near the corpse of a Spriggan the witches had placed over a brazier. I cannot fathom what purpose this may have been serving. On the table was a collection of rather rare alchemy ingredients and a the smallest of soul gems, filled. 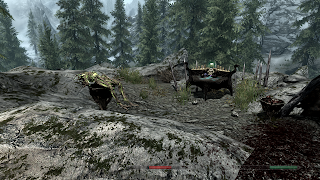 The witches' sleeping space also had an adult skeleton set upon a simple wooden table, again to what purpose I cannot guess at.

I thought about attempting to find a path through the hills to Riverwood, but chose comfort over convenience and walked the road through Helgen back to Whiterun.

As I entered the Temple I heard Danica arguing with a man. She interrupted their conversation once she saw me walk through the doors and introduced me to Maurice Jondrelle, a pilgrim and devout of Kynareth. He had been complaining about the state of 'Gildergreen', insisting that it was Danica's responsibility to fix. That she was busy with all of the sick and injured of Whiterun was of no concern of his. 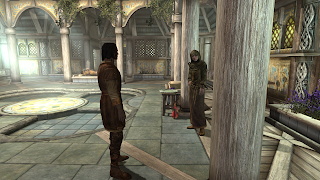 It fell on me to escort the irritable man to a place Danica called 'Eldergleam Sanctuary', a cave nestled within the sulfuric springs east of Whiterun. Inside this sanctuary was 'Eldergleam', the blessed tree from which 'Gildergreen' had sprung. I was instructed to use 'Nettlebane' to collect sap from 'Eldergleam' in order to restore 'Gildergreen' to its former glory. It sounds a lot more confusing as I write it down than it actually was: go to cave, stab tree, collect sap, return. Oh and make sure Maurice does not die along the way.

The sulfur springs are directly south of Windhelm and I have traveled past them many times during my previous stays in Skyrim. They are said to have curative properties, especially for the aged and the area is normally well-patrolled by Windhelm guards, though with the civil war that may no longer be true.

The walk would take me past 'Valtheim Towers' and I hoped to find it still abandoned. Maurice and I started our little journey later in the afternoon than I would have liked, but I gather I was doing Danica a large favor by removing him from her Temple.

For such a lengthy journey it was surprisingly without incident. We passed a riderless horse on the side of the road with the crumpled body of what might have been either a hunter or a bandit in front of it. Maurice and I agreed that the rider had probably stolen the horse and had not the skill to control it before being pitched out of the saddle and on to the cobblestones of the road.

The sun was setting as we crossed the small stone bridge joining the road to the marshy springs. 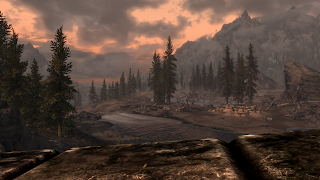 A small camp was situated on the other side, carefully within the confines of dry land. A woman calling herself 'Annekke Crag-Jumper' wistfully told me she used to be an adventurer like me, which would be quite a feat. Maurice insisted on stopping at the mining camp to eat and drink, so when we finally ready to find the Sanctuary it had already grown very dark. 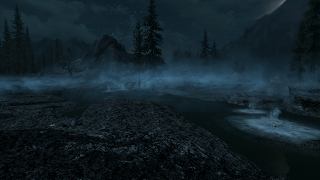 The persistent steam from the pools made it very difficult to see far and neither Maurice or I had a good idea of where the Sanctuary actually was. After wandering around pointlessly for awhile we finally found the cavern that would lead us to the Sanctuary.

I expected a dark, cramped cave with a shrine at the end of it and 'Eldergleam' to be a little tree carefully nourished in turn by visiting pilgrims. What Maurice and I walked into was far grander. 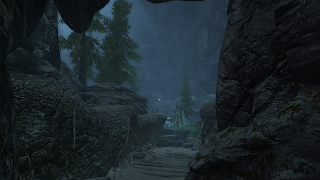 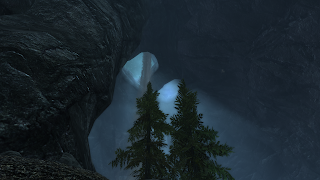 'Eldergleam Sanctuary' was a massive underground chamber with holes in the ceiling that allowed light and the hot runoff of the springs to flow underground on to 'Eldergleam'. 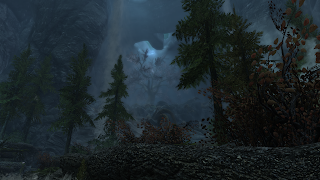 A Nord was relaxing near the entrance and welcomed Maurice and I to the Sanctuary, warning us that violence was not tolerated by either the other pilgrims or 'Eldergleam' itself. We continued inside and others were just wandering around or enjoying the hot water pooling about. It was a very peaceful place.

'Eldergleam' was atop a small plateau against the side of the cavern. Its roots blocked the only passage towards it, but scratching them with 'Nettlebane' caused them to retract, much to Maurice's horror. He exclaimed that he had not thought me a violent person and I wonder at the man's understanding of violence if he thinks merely brushing a blade over a tree is "violent". Nevertheless, the man was very upset and I explained I had to collect sap from the tree, likely by stabbing it with the blade. He nearly passed out.

He did have a suggestion on how I could complete my task with no damage to the sacred tree: he would speak to Kynareth and ask a deliverance from the blight of 'Gildergreen'. I agreed with the condition that if Kynareth was not forthcoming with a solution that I would be collecting the sap and leaving. 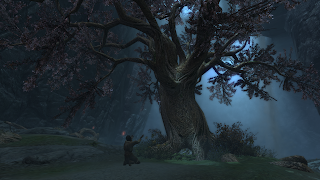 Kynareth was feeling generous for after a few moments of Maurice's silent prayer a sapling snaked out of the earth behind him. He got up, proudly stated that he had been heard and asked that I bring the small tree to Whiterun immediately. He wanted to spend some more time in the Sanctuary and we bid farewell.

It was close to midnight when I emerged outside and yet I still passed people happily bathing in the springs. My walk back to Whiterun was uneventful, but slow in the dark and I reached 'The Bannered Mare' at nearly four in the morning. How I have the energy to even write this is something of a mystery, but I am sure I will be suffering the lack of sleep tomorrow.
Posted by Raifield at 9:00 AM
Labels: Day 7, Orphan Rock, Skyrim, Whiterun