Danica was rather less than pleased to receive a small tree instead of the sap she had been expecting. She pointed out that pilgrims would be less than impressed by a tiny tree in place of the towering, though dead, 'Gildergreen'. I told her that Maurice felt that gathering the sap was not respectful of Kynareth and that devotion should come in the form of renewal, rather than maintenance. After a moment she agreed and thanked me for bringing her the sapling and leaving Maurice behind. She allowed me to keep 'Nettlebane', but I left it in the Temple, having no further use for it.

As I exited the Temple a man came running up to me, looking for the "adventurer-Khajiit" which he correctly assumed was me, in this case. He had a letter for me from the Jarl of Falkreath who wrote to invite me to come to his city so that we could discuss the possibility of work. The thought of traveling appealed to me and I felt that my business at Whiterun, for now, was finished. My descent into Bleak Falls Barrow will have to wait until I am more skilled, preferably in magic as well as in combat.

I had never been to Falkreath before, it was always too remote and small for much of the work I used to do in Skyrim. I knew it to be a town primarily known for its lumber and its graveyard for some reason. It was directly west of Helgen, but I decided to forego another trip through Riverwood and take the longer trip over the plain and through a mountain pass farther west.

My little journey began around ten in the morning and my first encounter of interest was with a ruined watchtower. 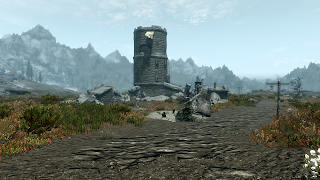 Much like the walls of the city, Whiterun's tower was more ruin than fortification, another example of the decay resulting from the Empire's decline and Skyrim's own civil war. The tower did appear to be manned by Whiterun guards anyway, so it was at least still capable of serving some sort of purpose.

Further down the road I passed a burned-out farmstead near to an almost equally-ruined fortress. The wooden palisade looked new and the collection of individuals patrolling the battlements were dressed in leathers or hides, likely another group of bandits. 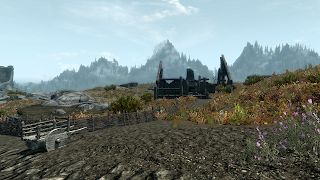 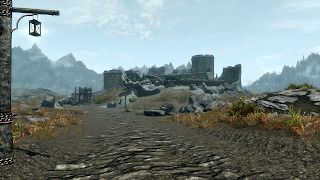 I kept to the road and they ignored me. I did notice that they had erected dummies along the battlements to make it appear they were more numerous, a clever idea for a group of bandits, though I wonder who they believe they are scaring off. It is obvious Whiterun does not have the resources to dedicate towards their eradication.

Along the road I came upon an Orc standing next to the bodies of two freshly-slain Sabre Cats, Skyrim's rather nastier version of Cyrodiil's common bear. He appeared uninterested in the corpses and I asked him why he was simply standing next to the road. The Orc refused to name himself, stating that he was simply an old warrior waiting for the "good death" that was promised to him. By who, he did not say. I was certainly not about to challenge a warrior capable of slaying two such beasts at once and wished him luck before continuing on.

Near a road-side farm I noticed a collection of stones that seemed to have been placed there purposely. There was no one tending to the farm that I could see, so I quietly walked through the farmstead and to the stones. Each one had a pedestal upon which a stone embedded with pictures of an animal spun. Nearby there was a lever and I soon deduced that spinning the pedestals to the correct animal would allow the lever to open the grate in front of the stones, underneath which lay a skeleton and a chest. 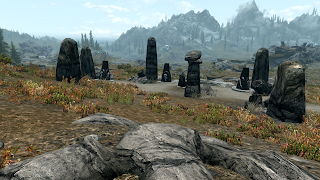 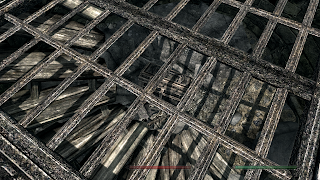 My experimentation with the pedestals proved frustrating and was cut short by a rhythmic thudding occurring behind me. I was admittedly frightened to see that the sound was from the approach of two Giants! 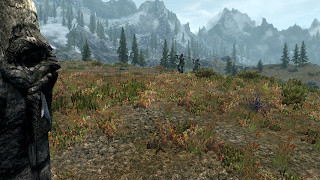 Perhaps the site was of some significance to them, perhaps it was merely a coincidence, but I was not interested in finding out. I immediately ran away from them further into the plain and away from the road. Other than a hunter attempting to train his dog I found little of interest as I worked my way back to the road and Falkreath.

The road turned through the mountains towards Falkreath and I came upon my own possibility of a "good death" right at the signpost. There was no way of me knowing that a Sabre Cat was just up the hill chasing a fox and when I turned to walk through the pass the cat suddenly spun around and charged right towards me: an unarmored Khajiit with a light wooden shield, a sword, and spells she could not yet cast.

Battling the Sabre Cat was a brutal experience. It was far stronger and possessed a predatory sort of cunning in its tactics. After circling me for several moments it charged, biting at my shield and attempting to rake its claws across my chest and face before disengaging and returning to circling. This cycle was repeated several times to its advantage, but finally I caught the timing of its attack and managed to kick it in the head before driving my blade between its eyes, splitting its skull in half. 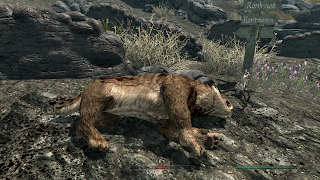 The fight was far more difficult than any bandit I have encountered and the Orc must be quite a warrior indeed to be able to slay two of these Sabre Cats at once! As for me I fared far more poorly, my clothing in tatters and blood streaking my fur. I was forced to sit alongside the cat's cooling corpse for a few minutes to let Dagoth Ur's special blessing do its helpful work after which I turned towards my foe and claimed its pelt for later sale. Clearly I have far to go in combat abilities as yet.

Fortunately that was my last fight for the day and the walk to Falkreath was peaceful after I almost died. I passed a lumber mill along a lake and spoke with the owner for a little bit. Her name is 'Hert', a rather un-Nordic name and though she was pleasant and talkative there was just something about her that did not seem right to me. She did not know anything about the sunken fortress opposite her mill and I left quickly despite her invitation to stay longer. 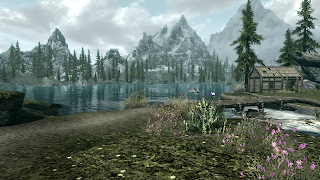 The pass between the mountains where I fought the Sabre Cat separates the plain from the heavily wooded area around Falkreath. Soon after the mill the road became much narrower as trees and grasses encroached upon it from both sides and the cobblestones gave way to simple dirt. 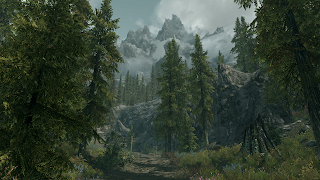 Falkreath was hardly the "city" the Jarl's letter had described. It look more like a large settlement that somehow grew within a massive forest. Despite it's humble appearance the town's trading post had some powerfully enchanted items, one of them a circlet the shopkeeper said would aid me in archery, an aid I could surely use if I could have afforded the jewelry. Instead I sold him what little I had collected between Whiterun and Falkreath and purchased some healing potions and a spell tome called 'Oakflesh' that would make my skin resistant to damage for a short period of time. It remains to be seen if I can cast it now.

The local alchemist had more healing potions to sell, as well as ingredients for me to create more with. When I fought the Sabre Cat I had none on me at all, a mistake I will be sure not to make from now on.

My last order of business for the day was the reason for the trip: to visit the Jarl about this work he claimed needed doing. His wood-and-straw Hall was much less impressive than Dragonsreach and the man inside reflected that lack of grandeur. 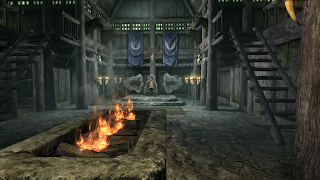 The man was young, brash, and utterly disinterested in his position other than that it afforded him the finest foods, drinks, and hunts. Any tasks other than eating, drinking, or hunting fell upon Falkreath's steward, an Altmer named 'Nenya'. The Jarl's important task he wrote to me about turned out to be the elimination of a group of bandits nearby, exactly the sort of task I was not eager to accept. But I had walked nearly all day to get here, so I accepted. He never said when he wanted them eliminated, after all and he will likely forget he asked me as soon as I leave the Hall.

Falkreath's inn, as well as every other place of business, is named with a nod towards the town's famous graveyard (which I have yet to see), making the inn the 'Dead Man's Drink'. Charming. Ten coins bought me a room without a door for the night, prompting me to write this entry as long as possible so that the rest of the guests will have left when I finally settle down to sleep. I hope to visit this famous graveyard of Skyrim tomorrow and will scout the approach to the Jarl's bandit group as well. If I can kill one or two of them before melee combat then I feel I shall have a good chance, especially if my 'Oakflesh' spell is something I can comfortably cast.
Posted by Raifield at 7:00 AM
Labels: Day 8, Falkreath, Whiterun