Having arrived so late in the day at Winterhold yesterday I had no opportunity to find out what I was supposed to be doing here. 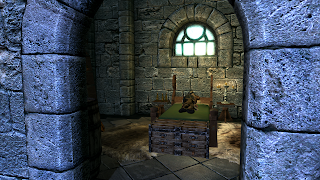 The other students were sleeping, so I left the 'Hall of Attainment' dormitory and wandered around for a bit. I ran into one of the mages, Mirabelle, whom Faralda had yesterday suggested I speak with. I took the opportunity to find out what was expected of a student, but Mirabelle simply replied that not killing anyone and limiting damage to the College were the only guidelines. When I asked her about Illusion magic she suggested I speak with Drevis Neloren, a Dunmer who she assured me would be willing to help further my skill.

I was accosted by another instructor as I was trying to locate Drevis. My assailant was Colette Marence, a seemingly insecure mage specializing in the school of Restoration. She complained that the other mages did not consider Restoration a "true" school of magic, but I assured her that hundreds of years of study validated her claim. Mollified, she offered to sell me some of her tomes, but my skill in Restoration is barely able to heal a splinter and I could cast none of her spells.

The library is managed by an Orsimer, Urag gro-Shub, who acted as if damaging one of the books warranted immediate execution. I politely told him that his library was one of the best I had visited and he gruffly thanked me, stating that there was always room for improvement. Scenting profit, I asked if there was anything he needed help with and he hesitated for a moment before admitting that he was after a copy of 'Hanging Gardens', a book he heard had been part of a caravan whose trip was abruptly terminated near a cave outside of the dismal town of Morthal. Naturally I agreed to the task.

This time when I visited the 'Hall of Attainment' it was completely empty of sleeping students, so I continued to the 'Hall of the Elements' where I was told the students and instructors congregated for lessons and was pleased to find everyone there. An amicable older Imperial, Tolfdir, was lecturing four other students on the use of magic, but they were unhappy and universally demanded to be taught something practical. 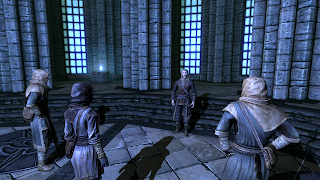 Bending to their demands, Tolfdir decided that we were to practice warding spells, a family of magic I know little about. He provided me a simple warding spell and the other students gave us room for him to cast a fire spell at me while I maintained the ward. Unskilled in Restoration, the effort of keeping the ward active under Tolfdir's fiery onslaught was exhausting and I hope no one noticed the strain it put on me.

With that Tolfdir suddenly declared we should all make a trip to the nearby ruin of Saarthal to search for artifacts. We all filed out of the Hall and the students, including myself, took the long walk as an opportunity to talk with one another. I was approached by an incredibly arrogant Khajiit who called himself J'zargo. He bragged that he had already mastered "Expert-level" Destruction spells and asked if I could claim the same. When I admitted I could not he expressed his disappointment in not being able to find someone with skills as high as his own.

The second student I spoke with was Brelyna, a quiet Dunmer who irritably rattled off answers to questions I had not even asked as soon as I approached. When I countered that I had not yet made her acquaintance she looked embarrassed and formally introduced herself as a member of House Telvanni, an admission that shocked me, as I assumed all the Great Houses of Morrowind had long since fallen. I would have liked to have talked with her more about Morrowind, but she seemed not in the mood for conversation and I let the matter be, at least for now.

The last was a Nord named Onmund. Unlike my other fellow apprentices, he was quite amicable and talked of the difficulties he had with his family in gaining entrance to the College. He did not approve, however, of our little jaunt to Saarthal as he felt we should not be disturbing the resting place of his ancestors. I had never heard of Saarthal before today and he was happy to give me a quick lesson on the history of Nordic settlements in Skyrim.

Saarthal was the first Nordic settlement in Skyrim and the provincial capital of the Nords for some time until its destruction by the now-extinct Snow Elves some time within the Mythic Era. It was later rebuilt by a Nordic king but was abandoned during the opening years of the First Era. Now it was just a ruin like any other, or so we thought.

After speaking with the trio I elected to make my own way to Saarthal so that I could see more of the surrounding area. I came upon a large statue of Azura and I wonder if the Daedric Prince has any memory of what I did for the Dunmer. I suspect not and that if she did, it would not matter for much. Still, I am interested to visit the shrine in the coming days. 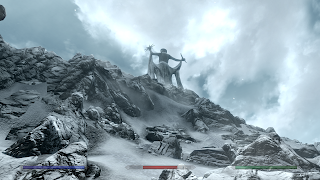 Saarthal was about as impressive as any other ruin in Skyrim: snow, ice, and rubble. Tolfdir and the other students had arrived before me and were waiting at the doors leading underground, each of them of a different opinion of the place. J'zargo hoped to find enchanted items to further improve his skill and power. Onmund was uneasy about disturbing his ancestors, which elicited sympathy from Brelyna, though she was curious about what we would find inside. 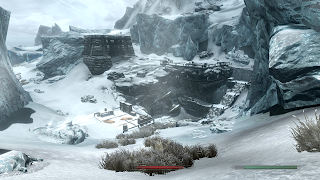 Tolfdir led us inside and gave us our assignments. I was to proceed further inside and assist another mage from the College, Arniel Gane, who was trying to find and catalog minor artifacts of the ancient Nords, a task J'zargo must have envied. 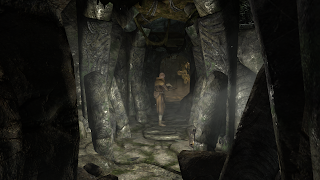 I found nothing save for a small engraved plate on a leather thong set in a little alcove. The smart thing to do, of course, was to grab it. As soon as I lifted the amulet from its resting place a series of metal rods shot up from the floor behind me, trapping me in the tiny room. Arniel called for Tolfdir, who was unworried and nodded towards the alcove which, unnoticed by me, was now shimmering with a red glow. 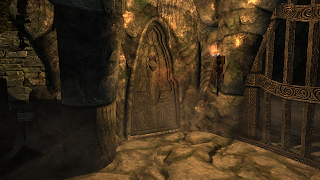 Tolfdir handed me a simple fire-element Destruction spell that I believe a newborn could have casted, but it was enough to somehow collapse the wall and retract the metal rods. Tolfdir eagerly stepped inside and beckoned me to follow as he disappeared into the new passageway. He was obviously enjoying himself and I noticed that his fellow mage Arniel had no inclination of following him at all, so forward I went as well.

We had not gone far before the world turned a blinding white and a figure clad in robes popped into existence right in front of me. Distressingly, I found I could not move at all and assumed Tolfdir was having similar problems. 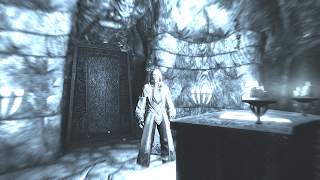 The white mage introduced himself as a member of the "Psijic Order", a name that invoked a vague memory that I could not quite recollect. He spoke of great danger further inside the ruin and warned us that judgement would be levied upon the both of us depending on our actions today and that I alone had the potential to avert the disaster that was otherwise now in the making. Once again, a figure unknown to me has placed a heavy burden on my shoulders. Such is my fate.

The apparition then vanished and I turned to Tolfidr, sure that he would have something to say about what just occurred. But he appeared confused and asked what happened, as I had simply spent the past few minutes staring at nothing. Of course. I told him that a member of the Psijic Order had warned me of dangers further inside Saarthal and he was practically giddy over everything that was happening. His excitement did not diminish when undead Nordic warriors, the Draugr I had first encountered years ago on Solstheim, ambled in to deal with us. They were no match for an experienced mage and Khajiit adventurer.

We continued on, battling Draugr in every room until we reached a large chamber ringed with stone coffins. Predictably they all opened at once and six undead Nords rushed at us. Once they were laid to rest Tolfdir asked me to continue on alone, as he was interested in examining the engravings on the coffins. Onward I went.

I fought one more Draugr on my own, but this one was slightly different: it was able to emit some sort of guttural spell which produced enough force to knock me backwards a few steps. It was a rather minor irritant to an otherwise simple fight, but it was new.

Tolfdir re-joined me after I opened a locked gate by solving a simple puzzle of rotating columns with animal motifs. I had only to spin the column so that its animal engraving matched the engraving set up the wall behind it. I cannot guess as to what reason their architect had for creating a lock with such an obvious combination. 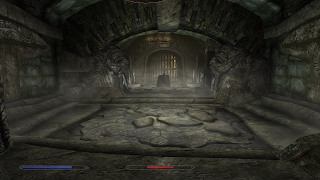 Beyond the gate was the danger the secretive Psijic mage had warned us about, though neither myself nor Tolfdir had any idea what it actually was. It appeared to be something similar to a giant metal egg and as we approached we saw that it was warded. The skeleton of a Draugr sat slumped on a throne in front of the egg, but Tolfdir seemed just as relaxed about this as he had everything else about today. 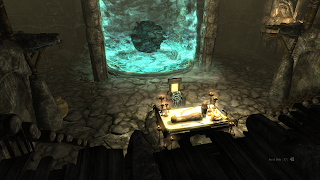 As I expected, the Draugr "woke" as we drew closer and Tolfdir shouted at me to distract it while he worked at dispelling the egg's ward. Nothing I did could damage the crowned Draugr, but once Tolfdir dispelled the ward the creature quickly fell to my blade.

Tolfdir was full of congratulations and urged me to return to the College immediately so that Arch-Mage Savos could be informed and assist in transporting the metal egg back to Winterhold. I agreed and left immediately, happy to be going back outside after being stuck in the giant tomb for so long.

I arrived back at Winterhold well past midnight, but the Arch-Mage was still awake in his quarters, reading. Without looking up he asked what I needed of him and I replied that Tolfdir and I found something mysterious and important and that Tolfidr remained at the ruins to await his most urgent arrival. Savos smiled and remarked that at least it was not a matter of another apprentice incinerated into ash and asked that I work alongside Mirabelle to research anything matching my description of a metal egg-looking artifact of the Nords.

But I was tired and went instead back to the dormitory where Faralda, one of the instructors, warned me that the Thalmor "representative" stationed at the College had started to ask questions about me. With a price on my head from both the Thalmor and the Dark Brotherhood, this cannot be a good thing. I shall have to be circumspect of what I say and do around this Thalmor, but I suspect one Khajiit looks much like another to them.

I do not know what tomorrow shall bring, but I am certainly guaranteed something of interest. I must admit that I am looking forward to it.
Posted by Raifield at 8:04 PM
Labels: Day 21, Saarthal, Skyrim, Winterhold