Skyrim Day 020 - The College of Winterhold

Little of what I had to do in Solitude held my interest and none of it long enough to prevent me from walking back out the city gate this morning. Before leaving I stopped at the 'Radiant Raiment' to purchase quilted clothing more suited to the snow and ice of Winterhold than my Hammerfell-inspired outfit.

The walk from Solitude to Winterhold College placed me near the impoverished hold of Morthal, a small town I always felt was too close to Solitude for its own good. Built on a swamp, Morthal has absolutely nothing to offer a traveler that Dragon Bridge or Solitude cannot and depends solely on a lumber mill to generate wealth. I thought to pass the place by entirely, but curiosity won the day and I walked through the meager fortifications, barely even eliciting a nod from the gate's bored guard. 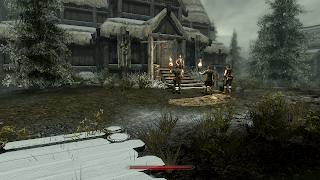 As I entered I heard several voices arguing ahead of me, as usual a group of citizens had a complaint against the local Jarl. The group was complaining about a house fire that apparently had occurred recently under some suspicion. They wanted the Jarl to look into the matter, but I knew where this was going and immediately left Morthal. Had I stayed I am certain I would have become involved somehow.

Another Dark Brotherhood assassin made an attempt on my life along the road to Winterhold and he quickly joined his friends in whatever awaits us after death. I hope that at some point the Brotherhood simply gives up trying to kill me before they run out of members, but they do seem a dedicated lot. Should this continue I may have to convince them to ply their trade elsewhere.

I stopped at a hunting camp and was surprised to find them offering Dwemer armor for sale. One of the hunters explained that they had recently been delving into the ruins scattered about, but I did not entirely believe that story. Either way, Dwemer is far too cumbersome for me and, bandits or no, I sold them a Dwemer shield I had found some days ago.

Actual bandits attacked me a few minutes after I left the campsite, but they were evidently more accustomed to bludgeoning merchants and student mages than experienced fighters. One was even wielding a staff enchanted to discharge bolts of ice, but it was so weak that it may have been gusts of cold air. The staff's origin lay beyond the trio: a dead mage, a dead horse, and a ransacked cart. 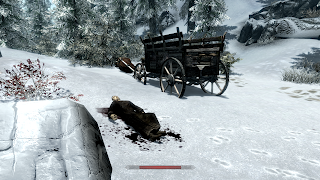 The road to Winterhold college curved away from the hills along the coast, making a walk straight through the hills to Winterhold seem like an attractive option. Having already been attacked by an assassin and three bandits while on the road, I guessed that the hills would offer not much worse.

Climbing up and down the icy slopes was a challenge, but it did provide a bit of grim humor in the way of three hunters attempting to slay two giants and a mammoth. 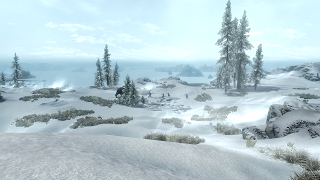 Choosing to loose their arrows only after one of the giants was nearly on top of them meant that none of the three had a chance. Both giants shrugged off the arrows and methodically smashed each of the hunters into the snow with their massive clubs.

I stopped at Dawnstar to talk with an encamped Khajiit caravan and was provided a tale of loss by one 'Kharjo', one of the caravan guards. During a bandit ambush an heirloom of his which he greatly valued as a memory of his home was stolen and he was unable to leave the caravan to track it down. As I spend most of my time wandering around I offered to retrieve it for him, as a favor owed could be quite profitable in the future.

Continuing through the hills towards Winterhold, I passed a tower with a dead horse in front of it. It was saddled, but I could see no evidence of a rider, nor any way to enter the tower save for descending down a wall of ice to search for a door there.

As if that was not strange enough, my walking then brought me to a dead mammoth frozen upright inside a wall of ice. 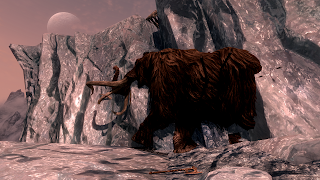 There were a few arrows embedded into the ice next to it and a Dwemer axe frozen fast to the ground beneath it, but the creature appeared uninjured. I can only imagine how confused its hunters may have been when they realized what had happened.

The weather turned considerably for the worse as I drew closer to the College and it was not long before I could barely see an arm's length ahead of me through the snow. Fortunately someone had piled rocks along the increasingly covered path through the hills and I was able to follow these landmarks from Dawnstar to the remains of Winterhold. 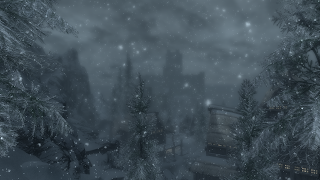 I arrived well after all the shops had closed, but met a Nordic woman named Birna who ran the general store of in Winterhold. She complained of not receiving much business in the half-ruined town and of having to take risky deals that occasionally went bad for her, one recently. When I asked about her recent bad deal she laughed and said she had a genuine dragon's claw to sell me. That reminded me of the story the shopkeeper in Riverwood told me about Bleak Falls Barrow, so I asked to see her claw. She seemed about to refuse me, but shrugged instead and disappeared inside her shop.

She reappeared a few moments later cradling a large "claw" hewn roughly from bronze with three steel coins set into the base of the foot. Each coin had an animal engraved into it, but the item bore little else in the way of decoration. Seeing my interest Birna offered it for one hundred Septims, but I talked her down to fifty with the provision that it remain in her store until I left Winterhold. She agreed and as we parted she remembered that the man selling it to her remarked it would be of use at a place known as 'Yngol's Barrow' far to the east, near Windhelm.

This claw may be helpful in discovering what awaits me at Bleak Falls Barrow, but I am also in no hurry to see Windhelm, having just arrived at the College. For now the claw sits in Birna's shop.

The College of Winterhold was guarded by an Altmer named Faralda who demanded to see some ability from me before I would be allowed entrance into the college. Of course she demanded a spell of me I did not know, but she was ready with the spell's instruction...for only thirty Septims. I begrudged her the money and received a simple 'Magelight' Alternation spell in return. I effortlessly cast the spell upon the college's emblem set into the stones of the bridge, satisfying the College's requirement.

Several members of the College were in the plaza despite the late hour and poor weather. One of them was the Arch-Mage of the College, Savos Aren. He cautioned me against taking any actions that would reflect poorly upon the College, but also said that he was always happy to welcome a new student, commenting that I was the second Khajiit the school would be hosting, which was very surprising news to hear!

But it was very late and I have traveled a great deal today to come here, so I have retired to my room after being escorted there by Faralda. I am eager to start my training tomorrow and hope to further my skill in the Illusion and Alteration schools so that I can be more confident of surviving Bleak Falls Barrow in the hopefully near future.

Posted by Raifield at 7:00 AM
Labels: Day 20, Morthal, Skyrim, Winterhold