Morrowind Day 120 - Back to Snowy Lands

12 Evening Star
~~~
It is with more relief than I anticipated that I find myself back on Solstheim today. I may have grumbled about the cold island in the past, but after the sewers of Mournhold I am ready to celebrate any reason to be back outside again.

Carnius, with all of his usual charm, asked me to go back to Raven Rock to inquire about a shipping manifest on a ship scheduled to arrive at the young colony. Carnius suspected that supplies were being skimmed off the top as it were and wanted to compare the ship's manifest against his own.

Falco laughed when I told him I was there to find a ship. He pointed towards the shore and asked where a ship of that size would dock. I had been envisioning something quite small actually, but he said that the ships also carried supplies for the fort and normally unloaded their cargo there. Given the dangers present in Solstheim's wilderness, Falco constantly had trouble finding people willing to carry the cargo from the fort to the colony.

However, he had no knowledge of any expected supply ships and suggested I ask around the growing town to see if anyone had heard or seen anything. One of the construction works, a Dunmer named 'Gamin Girith' said that he had seen navigation lights out on the water two nights ago, but fearing that it was a band of raiders, he did not investigate any closer. He pointed me towards the northwest and away I went.

The weather was terrible, with wind and snow conspiring to keep me from seeing more than a few feet in front of me. The rapid pattering of their paws were the only warning I got before the wolves were upon me, but they were no difficulty. 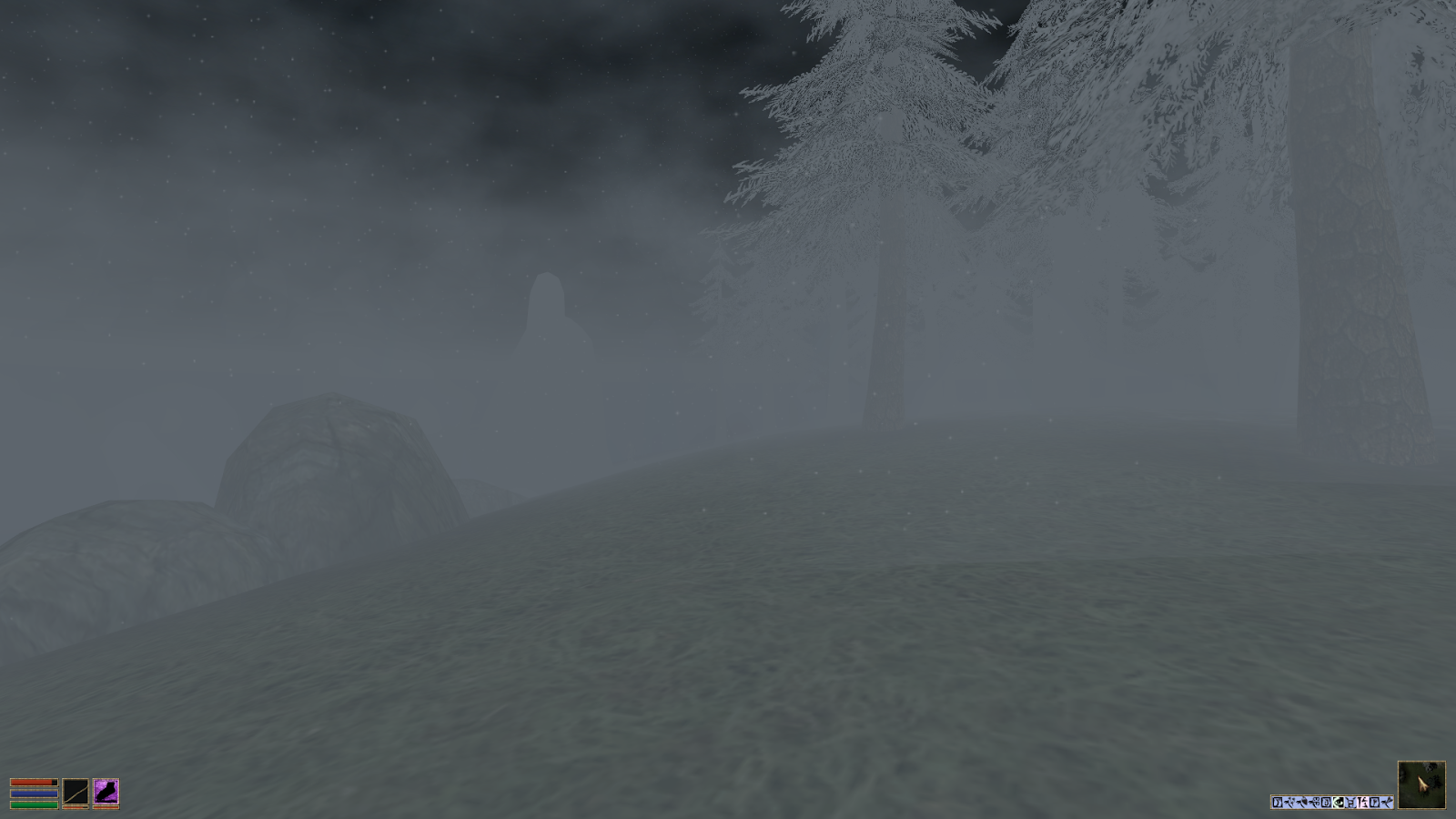 The unexpected undead Nords were a bit more difficult. Two came charging out of the fog as I approached the northwest shore and I managed to slow one down with an arrow before they got too close and dispatched the other with my spear before the wounded one fully recovered. I have never fought Draugr on the surface before, so I assumed something must have drawn them to the area.. I was correct: the "something" was the wrecked remains of the ship Gamin had seen two days ago, along with half-eaten body of a Bosmer. 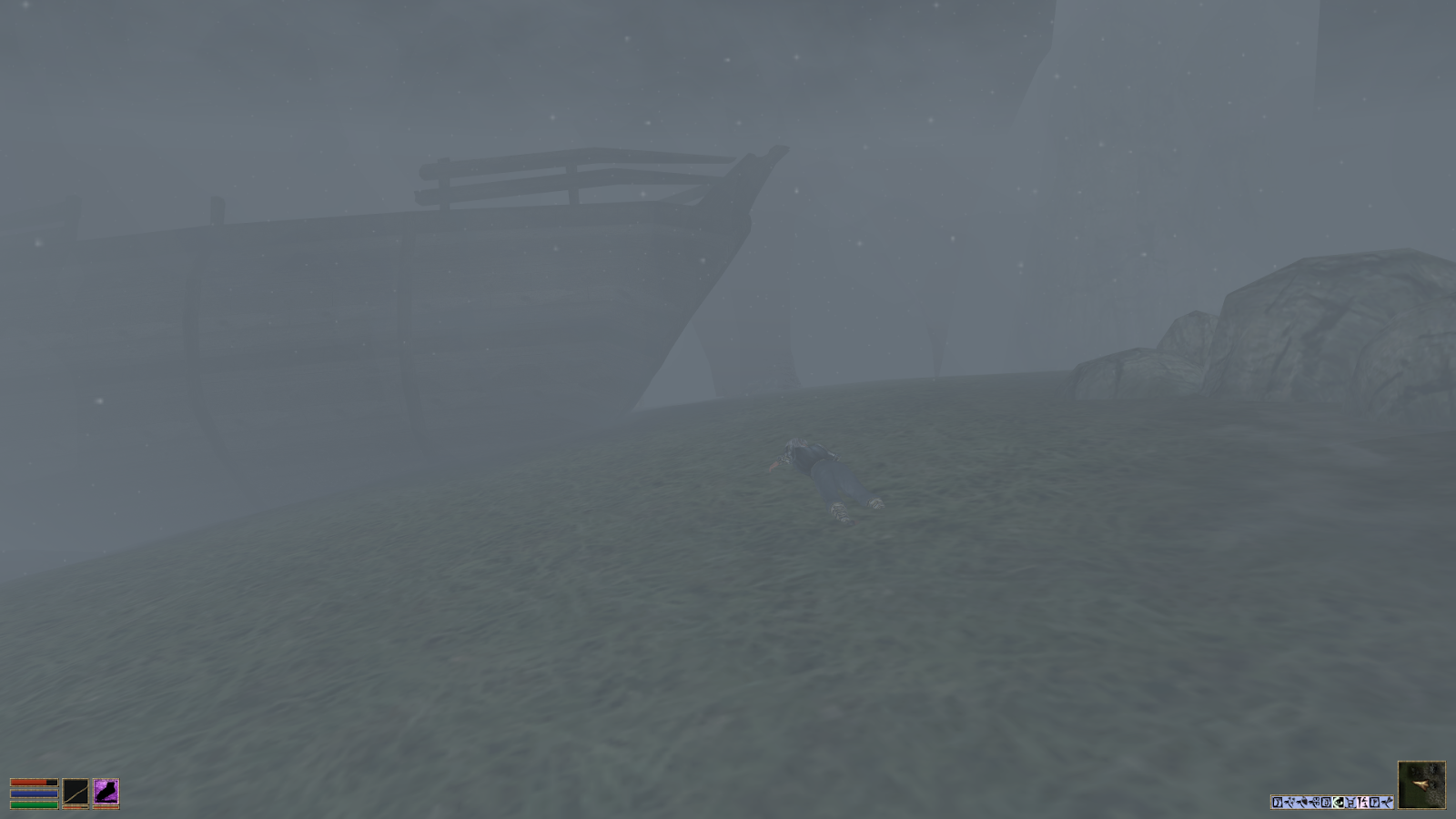 A woman's voice called out into the fog from behind the wreck asking if it was safe to come out. I was tempted to point out that she would never receive a negative answer to that question, but I assured her I had killed the undead and that it was okay for her to come out of her hiding place.

The voice belonged to an Imperial named 'Apronia' who had booked passage on the cargo ship the night before it left. She appeared to be unarmed and helpless, but the dead Draugr laying before her suggested otherwise. Whatever the case, she asked that I escort her to Raven Rock, but never once explained why she wanted to be there in the first place, only mentioning that she hoped the people at the colony were "nice and liked to chat". What purpose she will serve there is a mystery to me.

Falco was pleased that at least one person survived the wreck and subsequent Draugr attack, but lamented the loss of the pick axes that were onboard the ship. The wreck was fairly close, so I offered to go back to retrieve his equipment. No Draugr awaited me upon my return and the pick axes were cumbersome, but not difficult to carry. Falco paid me an amazing 500 Septims per axe, three thousand in total. People seem very willing to give me large sums of money lately and I still have very little reason to spend most of it.

Carnius was predictably less pleased and less generous than his counterpart. He was angry at me for the ship having been wrecked and threw a bag of coins at me that I later counted out as three hundred. He told me to go away, for just looking at me reminded him of the money he lost with the wreck of the ship. His personality certainly did not start as very good, but it seems to be getting more difficult to deal with him as the construction of the colony progresses. I would think he would be pleased with the recent successes, but for whatever reason that does not seem to be the case.

The day was still young so I followed the river north, intending to visit Thirsk and see if my position as leader had been usurped yet. On the way there I passed the Sun Stone, still alight with the magic I had awoken in it days ago. I met a Nord dressed in bearskin armor pacing nervously in front of one of the many burial barrows that dot the island. Seeing me pass by, he waved and shouted for my attention, which piqued my curiosity, for most Nords would have nothing to do with a Khajiit, especially in what could be considered an extension of their home province.

The Nord introduced himself as simply 'Ingmar' and asked if I could keep a secret, as if he had never met a Khajiit before...which now that I think upon it, could certainly have been the case. His request was a strange one: He had been sent to the barrow to slay a Draugr that lay within, but his first attempt sent him scurrying back outside. The task was beyond the man's courage to accomplish, but he felt that returning to the village without proof of the Draugr's slaying was worse than death at the creature's hands. The man was more clever than he was brave, for my arrival inspired him to come up with a plan.

His plan was not a great one: I was to enter the barrow first, draw the Draugr's attention, after which Ingmar would enter the barrow and kill the creature while it was distracted. I am not sure why I agreed. I suppose I did not want the man's death on my conscience. So I went into the barrow first and engaged the Draugr only with my oft-unused shield. While I was deciding on whether or not to kill the thing myself Ingmar stepped inside and cleaved the monster's skull in two with a blow from behind.

He was extremely pleased to have killed it so quickly and bubbled that if I ever visited the village he would greet me as a brother Nord. As for a reward, he admitted he had nothing, but that anything I found in the barrow was mine to keep. I found ten Septims.

The rest of the walk to the Mead Hall proceeded without incident. The mead I had asked Svenja to order had not arrived yet, so there was little to do there other than rest in the chief's room, which was surprisingly still mine. I am not sure where I shall be at the end of tomorrow, but I do hope I am coming to a close with my business at Mournhold.