11 Evening Star
~~~
I greatly tire of this city and its myriad of problems no one else seems able or willing to fix. Almalexia's guards certainly have the equipment and training to clear out the sewers and King Helseth's Royal Guards have the numbers, but neither will make any move that could weaken them in comparison to the other.

Once again I was to go into the sewers and this time to travel nearly the same path as I did traveling to the shrine. This allowed me a walk largely unhindered by combat until my path diverged, but I would have much rather been exploring someplace new. My formerly trodden path diverged into a rough-hewn passageway where two of the "liches" I encountered at the shrine were waiting.

They are powerful spell-casters, but physical very weak, a single blow of my spear or a few arrows were enough to destroy the force holding their bodies together. Further inside were more of these "liches", some of which summoned their own skeletal warriors to join in their assault against me. They were weak to arrows, so long as I aimed carefully enough to strike them in the head, but their numbers grew as I proceeded deeper into the ruins, culminating in an encounter with Barilzar himself, who I was certainly not warned about!

I had thought the 'Mazed Band' had simply kept its creator's name throughout the ages, but Barilzar was still "alive" as a lich himself, his raspy voice stating I could not be allowed to leave with the ring, which he regretted making to begin with. Any hope of a peaceful negotiation failed when a group of his lich warriors charged past him at me on his command, forcing me into a fighting retreat as I thinned their numbers by bow-shot.

Despite wielding a two-handed Daedric sword that I could barely lift, the undead mage was no warrior himself and obviously depending on his legion of liches and skeletons to guard the Band. Well-versed in fighting more heavily armed and armored opponents, I simply waited for him to unbalance himself with the un-wieldly weapon, then struck with my spear. It took more than a few strikes, but he fell, released from his own self-imposed penance. The 'Mazed Band' I had fought so hard for was nowhere to be found until I realized it was probably the simple, unmarked ring he had on his skeletal hand. 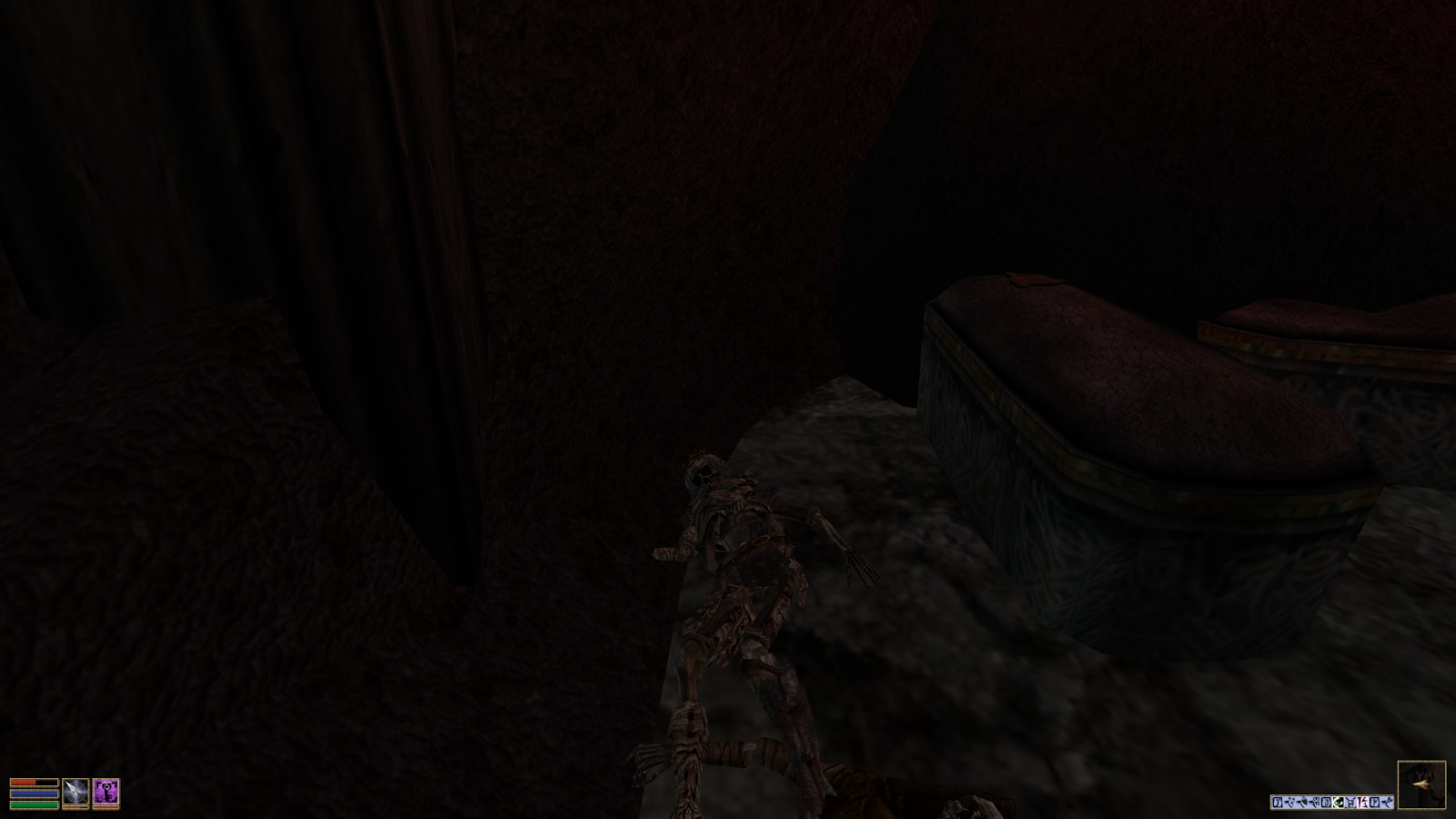 I returned to the Temple with some trepidation, for the wizard's warning kept repeating itself in my head. Fedris wanted nothing to do with the ring, instructing me to speak with the Archcanon. He in turn denied any responsibility for the ring and announced that I had "earned" the honor of speaking with the Goddess herself. 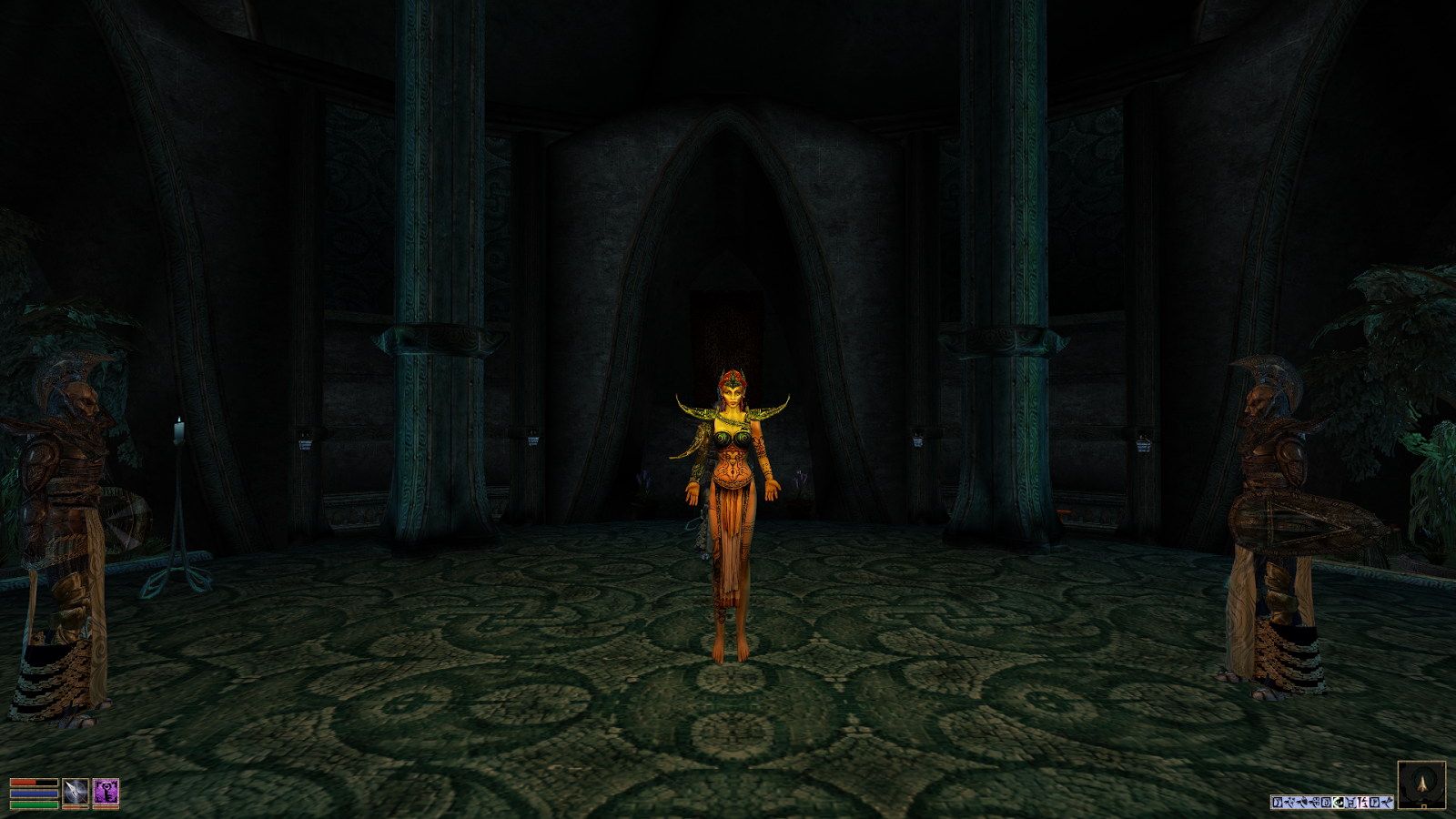 I was rather unimpressed by the so-called Goddess. She seemed tired and distracted, constantly referred to me as her "obedient servant", and only showed any sort of interest in me after she had Barilzar's ring. Her interest only extended as long as it took to wave one of her hands, announce she had bestowed her favor upon me, and then dismiss me from the room. Considering what I had to fight to  get the ring, I expected a bag of coins at the very least.

My brief encounter with Almalexia has me a bit unsettled. What was so terrible about the nondescript ring that he would willingly transform himself into a lich in an effort to ensure no one would claim it for themselves? No one I have asked seems to really know what it is supposed to do, but several people told me it was considered to be an evil artifact and one best left under the city. Of course, I was told this only after I handed it over to the distracted Goddess. I do have a suspicion that this is not the last I shall see of the mysterious ring.

An Imperial called to me as I exited the Temple and I turned to see a young man jogging towards me with a scroll in his hand. It was a summons from Carnius Magius in Fort Frostmoth to return in order to take care of some unspecified business regarding the colony of Raven Rock. Any reason to leave Mournhold was a welcome one, so I headed back to the Palace and had Effe-Tei send me back to Ebonheart. Once back on Vvardenfell I activated my Recall amulet and popped back into my small home in Ald'ruhn.

There was no way around the long way to the coast, but I was pleased that there were no Blight storms raging above me, even when I was right against Red Mountain itself. I can only hope things will remain as peaceful as this, at least on Vvardenfell. It was late afternoon when I reached Khuul and well into the night by the time we docked at Fort Frostmoth. I saw no reason to travel the frozen land in near-darkness, so I am staying at the fort until tomorrow. It is nice to be away from Mournhold, even if the alternative is Solstheim.
Posted by Raifield at 4:29 AM
Labels: 11 Evening Star, Day 119, Mournhold, Solstheim