31 Sun's Dusk
~~~
More progress made again today! I am so close to completing the Skaal's Test of Loyalty and could have completed it today, but was distracted by other tasks made to me.

I had wisely completed my work with the Earth Stone late last night and therefore had no need to walk all the way to the west coast of the island. Instead, the Tree Stone was my next target and almost directly north of Fort Frostmoth.

On my way there I stopped to explore a small underground cave, but it proved to be as rewarding as the family tombs back on Vvardenfell: a few flasks of cheap elixir, some scattered coins, and a large collection of worthless sundries. Unlike the ancestral tombs of the Dunmer though, the cave was completely unoccupied. 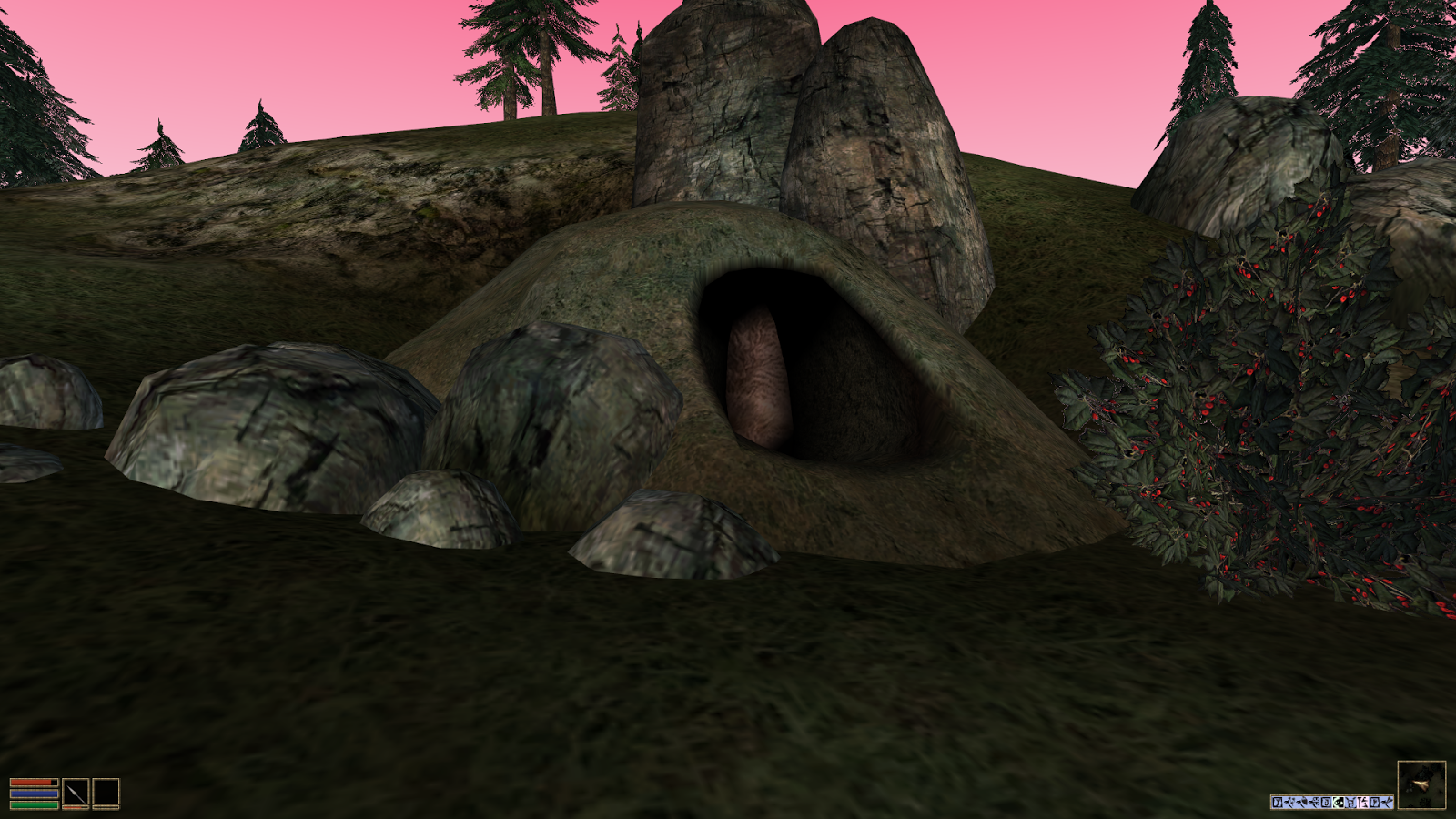 The bears and wolves were oddly absent all morning and I found the Tree Stone easily and without any incident. Approaching it provided me with my next Test of Loyalty, this test was to find the stolen seeds of the First Tree. I was told the thief fled east and that that whomever held these seeds "controlled the trees", but what that actually meant was not made clear. Once I recovered the seeds I was to plant them so that the First Tree would grow once again. 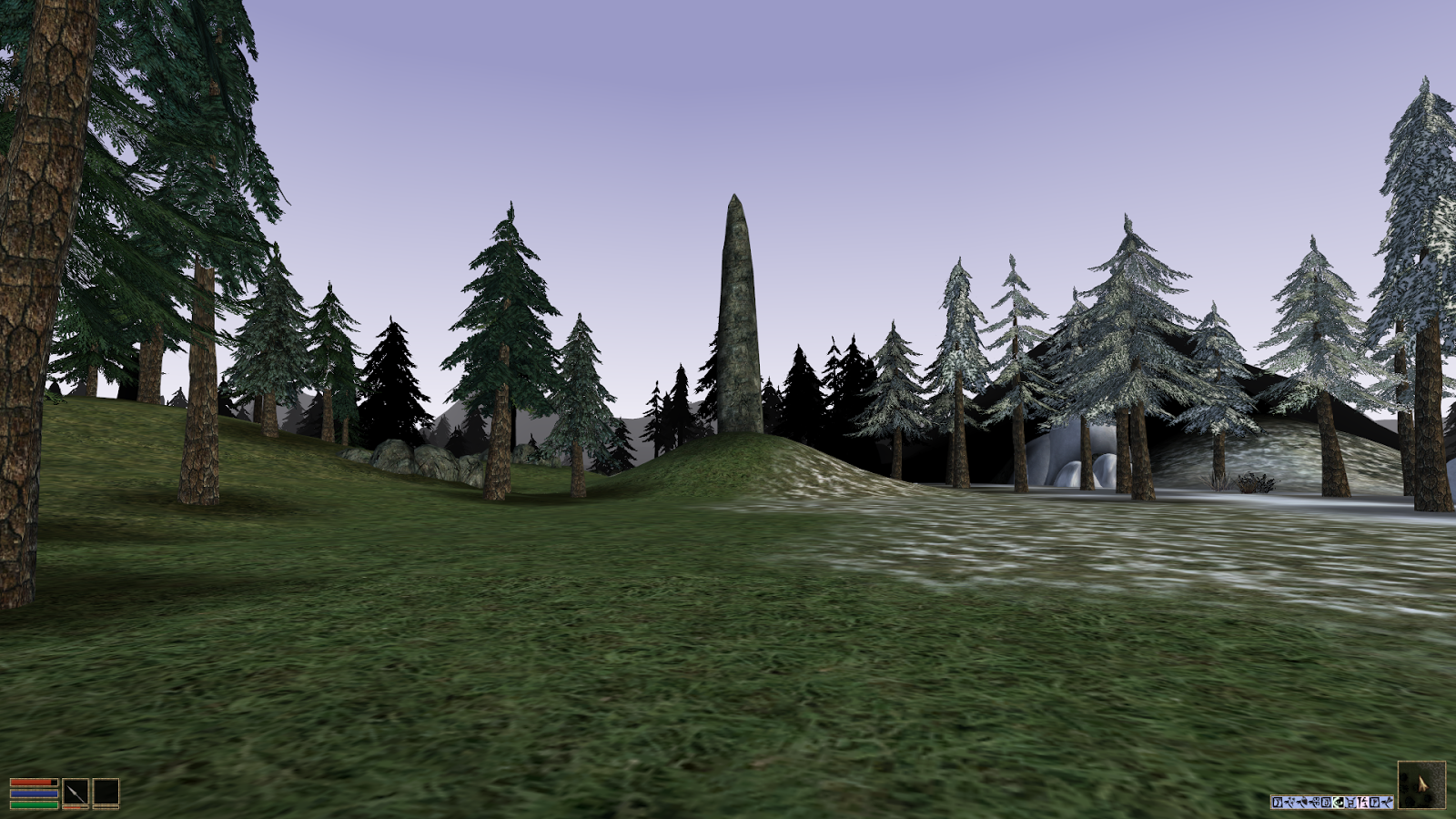 I should have thought harder about what it meant to control trees on Solstheim, but it did not remain a mystery for long. A few minutes walk to the east of the stone brought me to a cluster of trees in which one of the blue goblins stood contently, surrounded by docile tree-women. He yelled something in his own language when he spotted me and with a wave of his arm sent his leafy soldiers loping towards me. 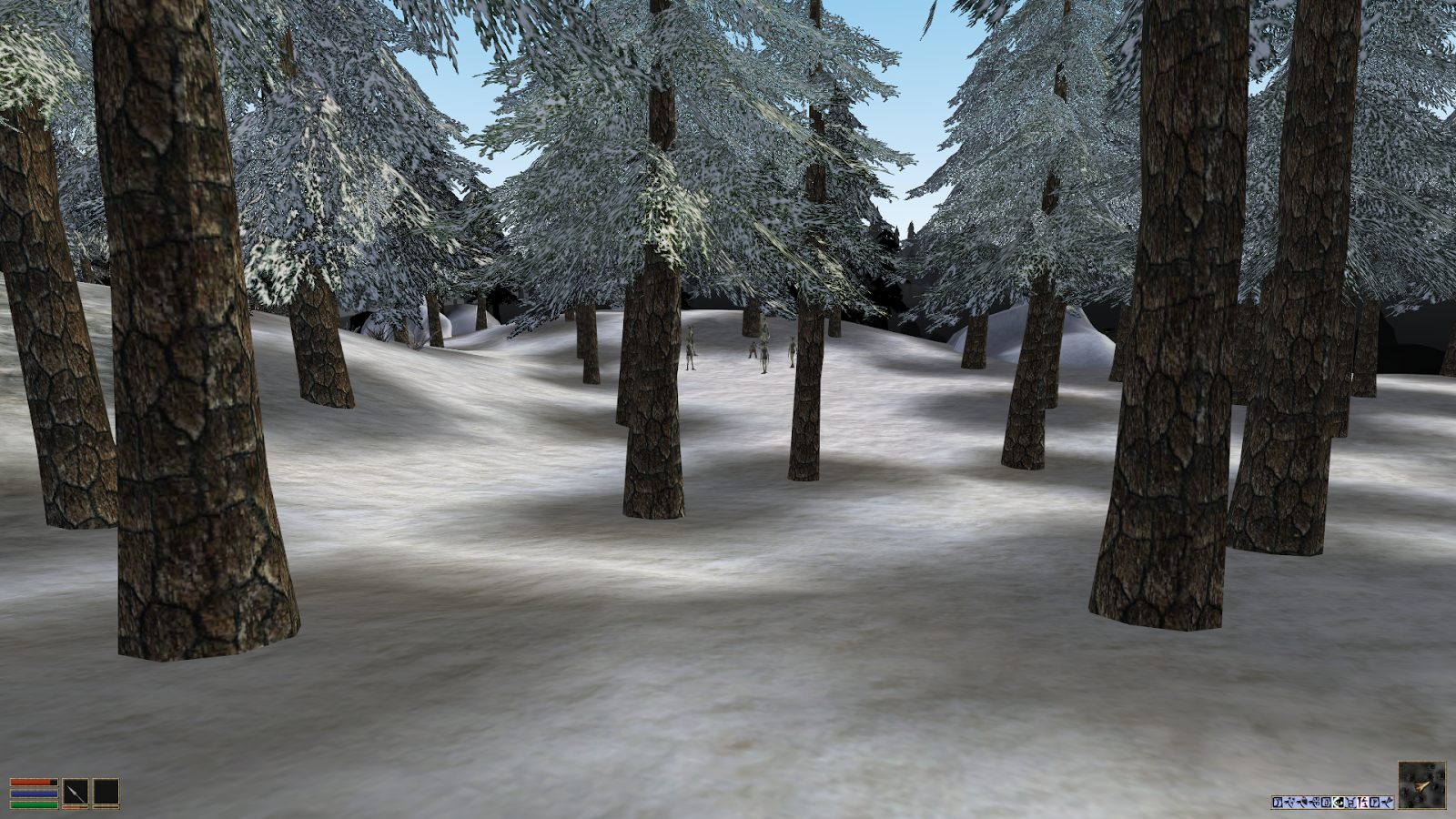 Mindful that they were thralls to the goblin I did not attack them, instead battering my way through the group with shield and shoulder in what was no doubt a very awkward looking and un-Khajiit stratagem. The thief of seeds was killed with a single thrust of my spear and four small green seeds fell from his hands as he collapsed.

I became aware that the sound of wooden legs crunching through the snow behind me had died down after I picked up the seeds and when I looked up the tree-women stared blankly back, evidently awaiting a command of some kind. I am not sure if the creatures can blink, but they never did so long as they were placidly gazing at me and the effect was rather unsettling.

I started to walk away and they made no move to follow or attack, choosing for some reason to remain with the fallen body of their former master. My guess was correct, for when I walked back to the Stone it began to glow and produce small globes of white light. Only the Sun Stone was left to visit now and the day was still young. I felt that today I would finally be done with the Skaal's test. 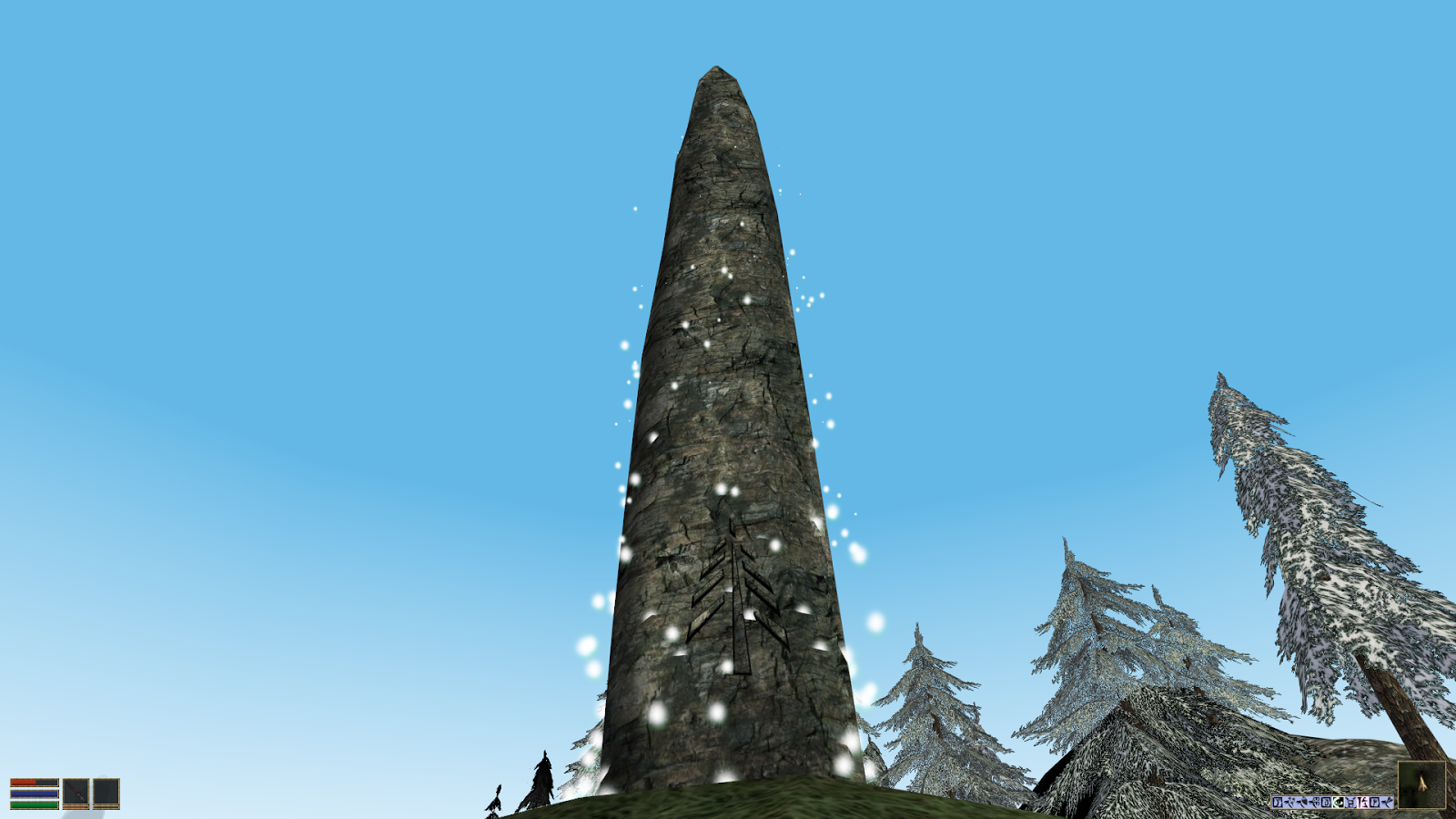 The map placed the Sun Stone at the end of the river I have been following for the past couple of days, so I walked along the river bank and came across a small cave facing the water. My few experiences with caves on Solstheim encouraged me to keep walking, but this one showed the signs of recent habitation. The river at that point was too shallow to permit even the smallest boat, so smugglers seemed unlikely. My curiosity got the better of me and I cautiously pushed the heavy furs serving as the door aside as I descended into the frozen earth.

The only inhabitant was a Nord woman and contrary to everything my life has taught me to expect, was not hostile. She introduced herself as 'Kolfinna' and welcomed me to the cave that was her home. She and her husband shared the small living quarters until his recent death at the hands of his friend. The husband, charmingly named 'Gustav Two-Teeth' had been slain during an argument with another Nord called 'Sigvarr the Strong'. Kolfinna sought monetary compensation for the death of her husband, a Nord custom called 'wergild'.

She was scared to talk to Sigvarr herself and asked if I could have a word with the man. She did not wish the man dead, but she did want his family heirloom, a small gem called 'Pinetear'. If our conversation came to blows she was not adverse to my killing him, but her preference was for the man to live.

He frequently spent time hunting bears and wolves near a collection of stones called the 'Altar of Thrond' northwest of her riverside home, but she warned me that his favorite weapon, a two-handed hammer, was enchanted to inflict paralysis. I would have to rely on my greater agility and speed to put enough distance between us so that I could dispatch him with arrows, if it came to that.

So the Sun Stone was forced to wait while I wandered about trying to find Sigvarr. I surprised a group of smugglers camping along the river as I followed it north and I found it to be a bit refreshing to be fighting poorly-equipped Dunmer again for little to no reward. I also found Louis Beauchamp's airship...what remains of it. The scattered wreckage and injuries the crew's corpses present suggest quite a hard landing, but the Captain survived the wrecking of the craft only to succumb to Solstheim's cold a few days later. His journal suggests a trip beset by bad omens, the most telling being that of an Argonian crew-member that tried to intentionally crash the ship and had to be tossed overboard. They did find the burial cave where Louis's amulet should be but crashed during their attempted landing. It is encouraging to know that the amulet is close to the wreck, but no specific directions were given on how to get there. It is something I shall have to keep in mind for later. Louis would be interested to read the Captain's account, so I liberated that from the man's frozen hands and left him and his crew as I found them.

The 'Altar of Thrond' was atop a small hill near the wreck and looked every bit like an actual altar, which I did not expect. I was lucky to have stumbled upon it as I did, as from a distance it just looks like a collection of barren rocks. Sigvarr was in a copse of trees near the Altar just as Kolfinna said he would be and warily waved to me as I approached. I got right to the point, announcing that I had been sent by Kolfinna to collect wergild for the death of her husband. He brashly declared that he did what had to be done and that, fearing for his life, had no choice but to kill Gustav.

Hoping to avoid having to fight him, I explained that even so, Kolfinna considered him to be her husband's friend and that his death deeply wounded her due to from whom it came. I spoke of the admiration I had for the Nords' bonds of brotherhood and how surprised I was to hear that such a warrior as Sigvarr had slain his friend over a petty argument. This was all untrue, of course, I had no such admiration and never really thought about anything of the sort to begin with. But it was surprisingly effective.

Sigvarr handed me the gem Pinetear, saying that he hoped its possession would help ease Kolfinna's pain and that he would carry the guilt of what he had done with him for the rest of his life. Having said that, he walked away and I started the walk back to Kolfinna's cave.

She was pleased to receive the gem and even more so that Sigvarr still lived. As a reward she is letting me stay in her small cave whenever I wish, which is rather more accepting than I expected, and I was given a key to her late husband's chest, but it contained Nordic fur armor that neither fit nor was worth much. Still, it is a good deed done and I am glad I took the time to help.

I finally reached the Sun Stone ironically long after the sun had set. Its quest was just as brief as the others: Go west and free the Sun from the Halls of Penumbra. It sounds like it will be similar to the Wind Stone's task, but I had no time left in the day, so the Sun Stone's will have to wait for tomorrow. 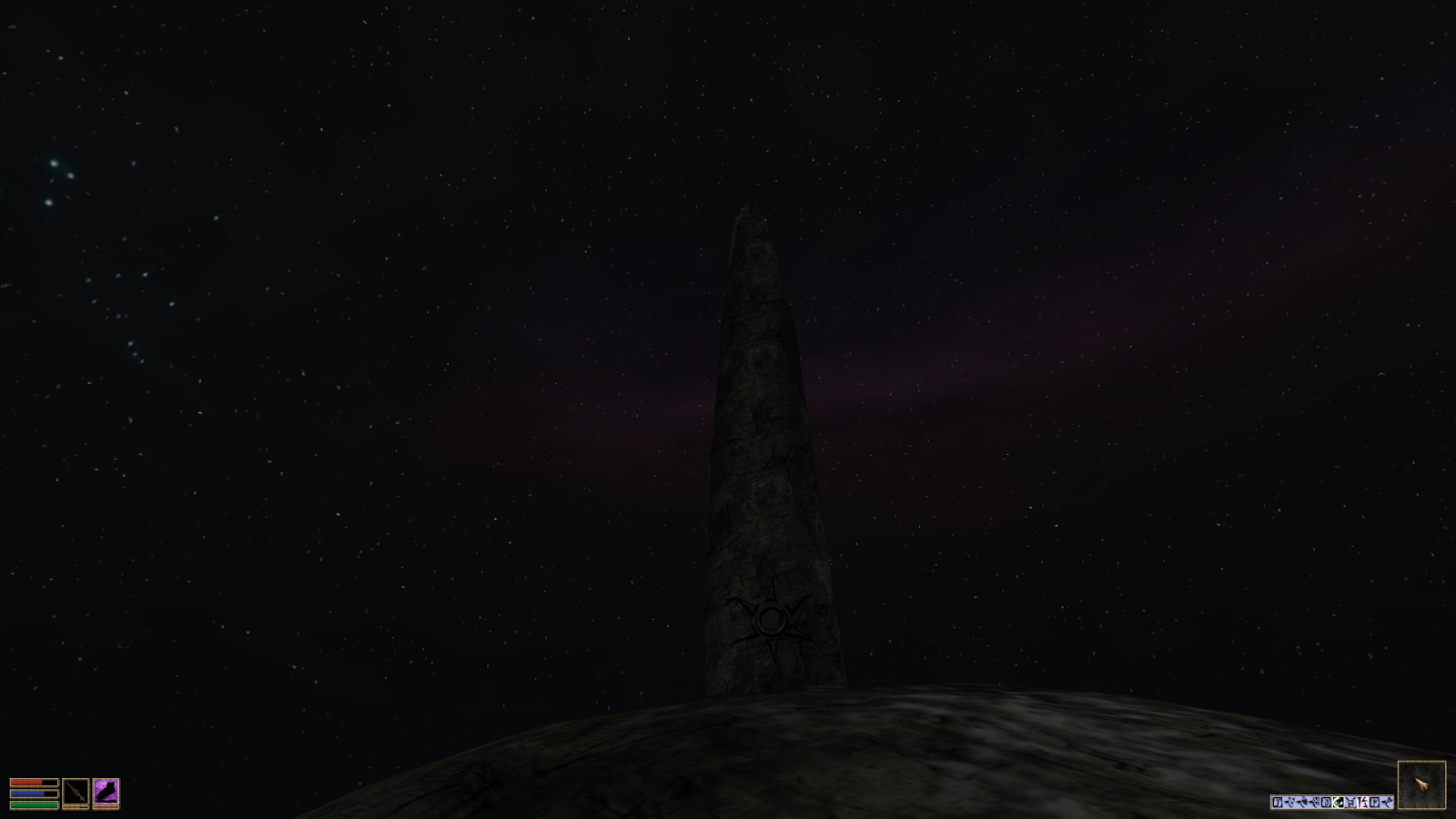 However, there was enough time for one piece of business: the airship Captain's journal. I Recalled back to Ald'ruhn and sought out the mage Louis so that he would learn what became of his ship. He was distraught to hear that the ship was a wreck and the entire crew perished, but he pressed a sack of coins into my hand and urged me to seek out his Amulet myself, which I will likely do when I have the time.
Posted by Raifield at 1:53 PM
Labels: 31 Sun's Dusk, Ald'ruhn, Day 108, Solstheim