Morrowind Day 97 - Making A Name for Myself

20 Sun's Dusk
~~~
If the recent chaos within House Redoran was not enough, I woke this morning to a grim reminder of the growing influence of Dagoth Ur. Ald'ruhn was gripped by the violence of a strong Blight storm, bathing the entire town in a dull red glow as the sky appeared to ripple with fire and lightning. A wonderful start to the day. Visibility was bad enough that I considered breaking my vow not to use the Silt Strider service, but Gnisis was close enough for me to stumble safely to, ending with an unexpected tumble down the side of a hillside and into the river that separates the fortress village from the rest of Vvardenfell. My sudden arrival into the water startled a Dunmer who appeared to be bathing, but I scampered away before he could say anything.

I was looking for Hetman Abelmawia, the steward of House Redoran who represents the village of Gnisis in contrast with whomever is in charge of the Imperial fortress. He was easily found and my suspicion yesterday was correct: the "taxes" only came to sixty Septims. I could have paid Gnisis's taxes, or whatever the Septims really represent, all on my own. So many little things about Morrowind simply fails to make a whole lot of sense to me.

Hlaren had one last task for me before he would support my advancement within the House. This one was the most personal of anything I have yet been asked to accomplish: find a long-lost love of his, a Dunmer named Nalvilie Saren . He seemed confident that this woman would be willing to move from her home in Vivec to be with him and asked that I tell her he was no longer concerned with the past, only their future together. I really had no choice but to agree. Hlaren thanked me and excused himself to take care of the business of his manor. I was just about to leave when a guard that had been loitering nearby during our exchange asked me to spare a moment of my time for her.

Her name, Nalvyna Sarinith, was surprisingly similar to the councilor's love and for good reason I suppose: she had feelings for the Redoran lord. Nalvyna revealed that Nalvilie was living in disgrace at Vivec and has a long history filled with many lovers, of which Hlaren was but one. She pleaded with me to speak to Hlaren on her behalf in order to convince him to, as she put it, "...look a little closer to home."

I readily agreed, happy to possibly not find myself in Vivec today. Hlaren was further within the manor, but willing to have his work interrupted. He spoke highly of Nalvyna when I asked of her, but was hesitant to meet the woman's shy advances until I rather brashly pointed out that Nalvilie was a woman of much less honor than his loyal guard and much more worthy of his honor. The look of surprise on his face was comical. It was certainly the first time in his life a Khajiit berated him, but he took it with a sense of humor and agreed to speak 'honorably' with Nalvyna. He agreed to support me within House Redoran.

I am just glad to have had only to walk a few dozen steps to earn his approval!

The second approval I needed for the stronghold had to come from Mistress Brara Morvayn. Her husband had been the Councilor until he was killed defending their Ald'ruhn manor from Corpus-infected creatures. I thought this odd, for until today I have never heard of the Sixth House physically assaulting an occupied dwelling, especially one in a sizable town. Her task was obvious: I was to be the counter-assault into her former home. The only help she could provide was an observation that the creatures had started to wander close to the manor only after her husband had brought home a red statue.

This is getting to be quite alarming, but at least I knew what I was going to be facing.

Morvayn Manor lies outside of Under-Skar against the hills encircling Ald'ruhn, making it easy for the monsters to rush the building with the element of surprise. Sadly, Brara's husband had almost made it, perishing just at the foot of the stairs leading upwards into the dining area and the front door. I imagine he made his last stand at the stairs as his wife and retainers fled up the stairs to safety. 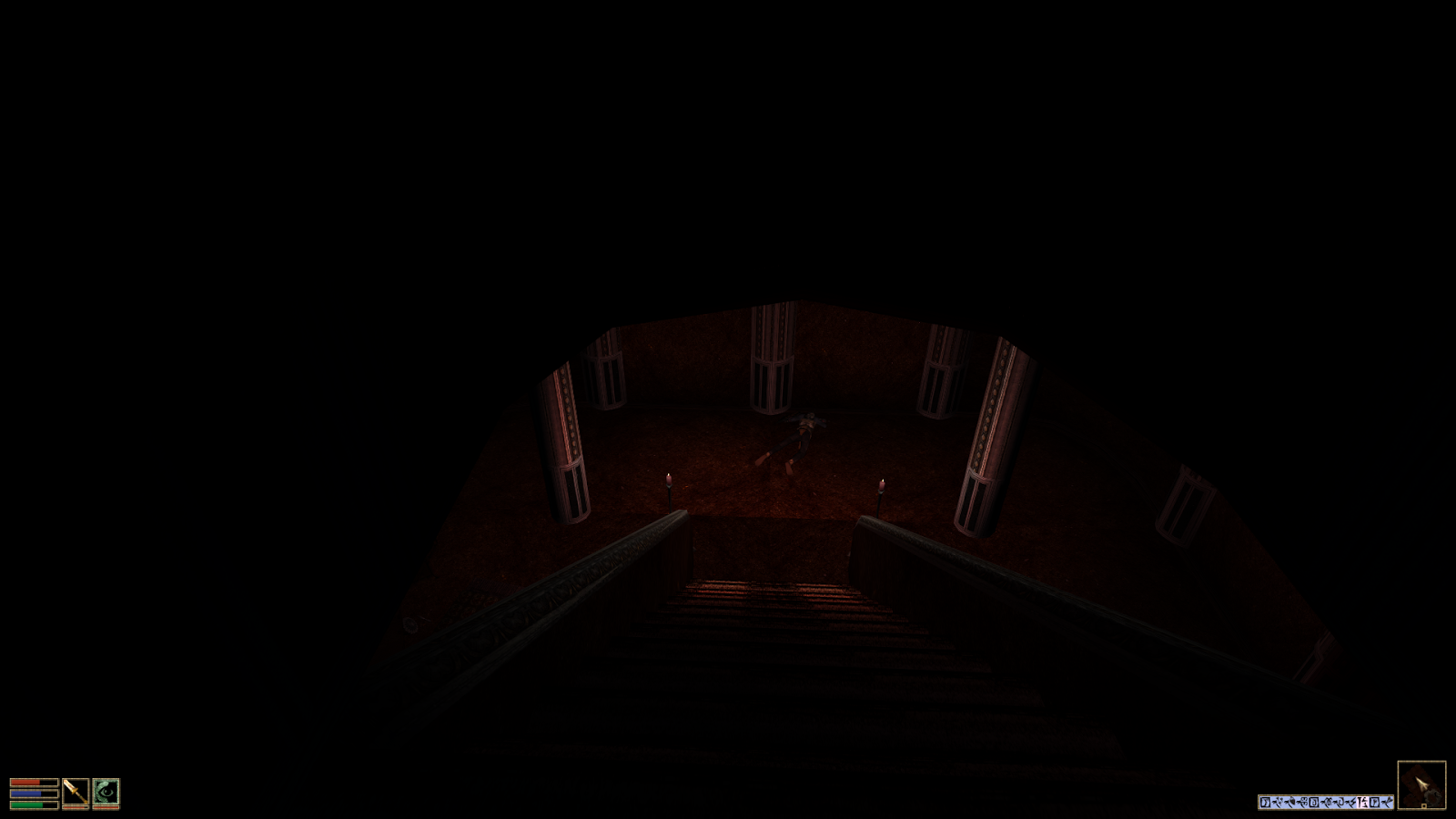 The blighted residents soon arrived to welcome me, but compared against what of the Sixth House I have fought against and won these creatures were of little consequence to me. The group was sizable, but not particularly dangerous: six unfortunate Blighted men, probably Imperial or Breton and three of the hulking mountains of flesh the men might have turned into given enough time. Luring them to the stairs evened the odds considerably and they all fell near the body of their final victim. 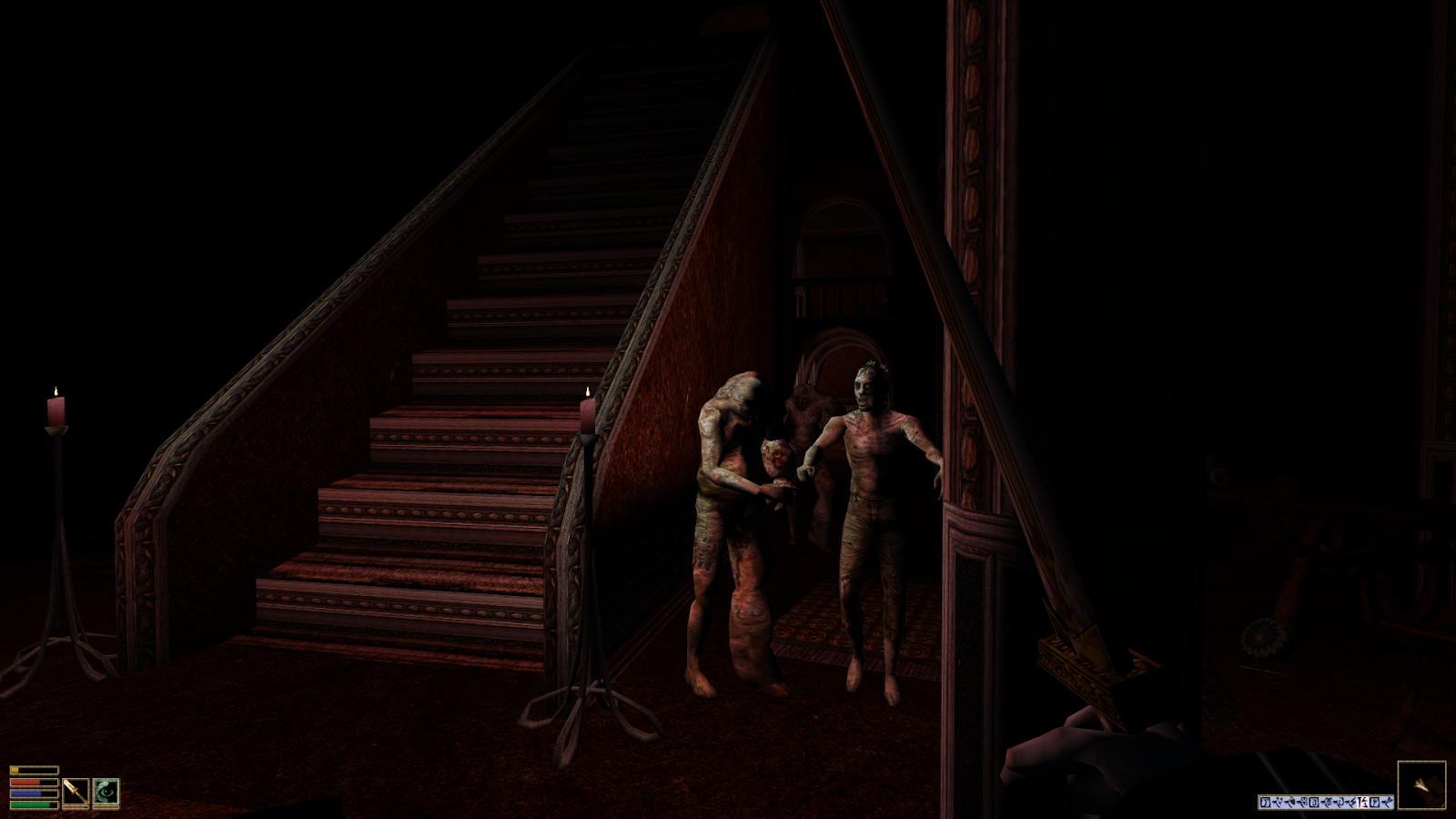 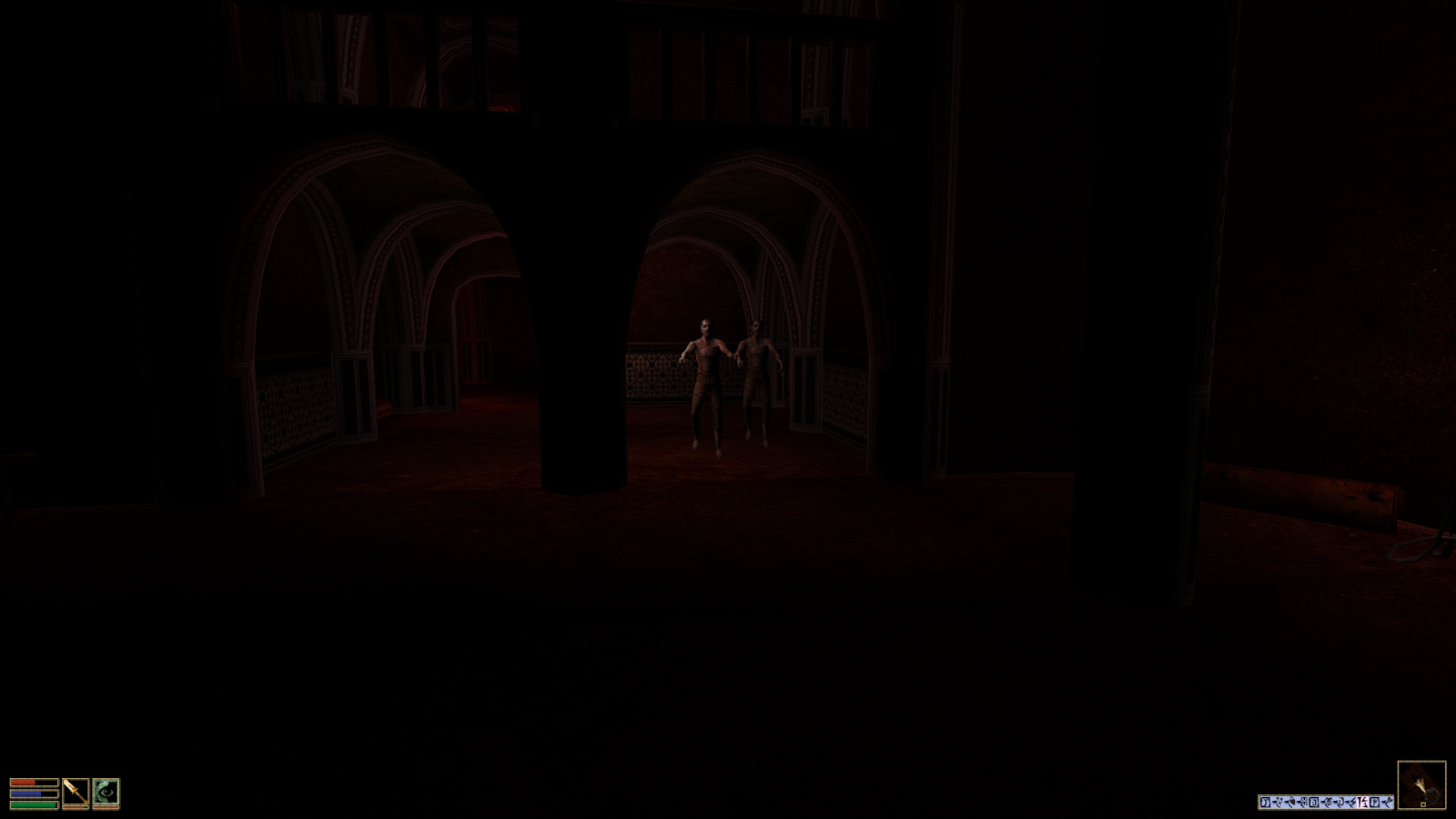 A conspicuous red glow was throbbing behind one of the doors and I thought I knew what I was about to find. The statue was not in the room as I thought it would be, but the four candles encircling a Sixth House banner were purposely placed there and not likely by the former Dunmer inhabitants. The Corpus creatures I slew did not seem to have the manual dexterity required to arrange and light candles like that, but I can think of no other explanation. Down the hallway from the candle room was a scrawling of a scarab similar to the design on the banner and the drawings I had found at the various Sixth House bases. While I am willing to assume the Corpus creatures were able to shuffle the candles around, I cannot believe any of them drew the symbol I found on the floor. Despite what recent progress I have made in Ald'ruhn it seems that Dagoth Ur's agents are still at work in this town. 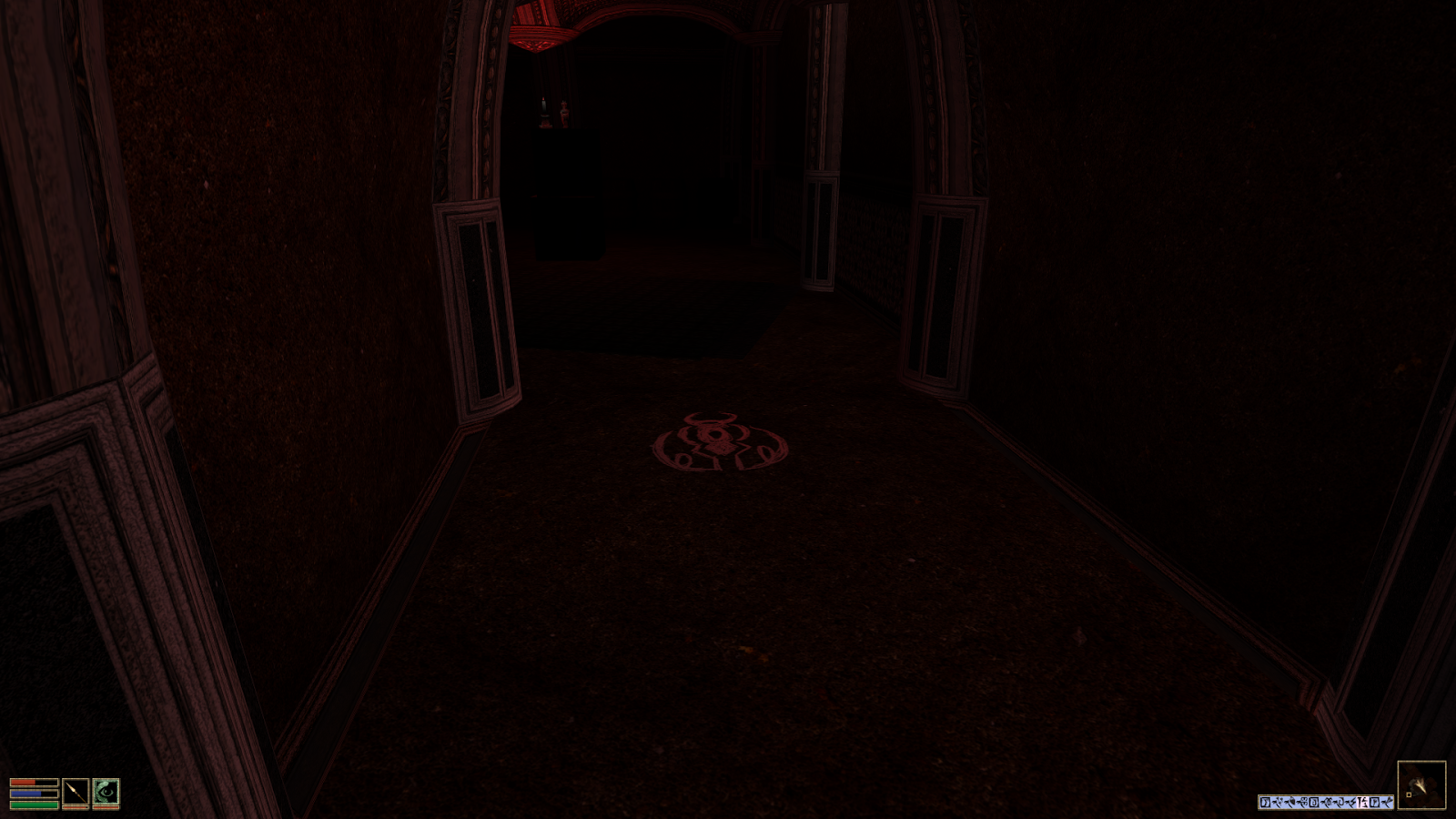 Just past the marking on the floor was the statue sitting on a crate, next to another red candle. I took the cause of all this trouble and brought it to Lloros so that he could disenchant and get rid of it. Whether Mistress Brara moves back into the manor is her own business, but I cannot see how someone could live in a home that has seen such tragedy. It will likely end up in the care of the Temple to whatever use they can manage.

Even though she had lost most of her wealth and all of her family, Mistress Brara still saw fit to reward me materially with an amulet enchanted to strengthen my attacks. Compared against what equipment I currently have it is a paltry thing, but the thought was a nice one. She confirmed that she will support my rather forced advancement within the House.

I returned to Athyn and he confirmed that news of my deeds had already reached him. With the support of the two Councilors I am now a House Father (Mother?), meeting Galsa's requirement and allowing the final phase of the stronghold construction to commence. Finally! Athyn mentioned that I could be named a Councilor myself, but that would require the support of the final two Councilors. Quite frankly I have no interest in the politics of the House, I originally just wanted something to do and now just a safer place to live than my tiny house.

Galsa was just as helpful as she usually is: She had nothing for me but the advice to travel to the construction site once again, this time to see what I can do to attract more settlers to the fortification. I do not see why she lacks for any ideas on that subject.

Having raged all morning and afternoon, the Blight storm was finally spent as evening approached. If anyone was hoping for clear weather they were sorely disappointed for the air was still full of dust, making it just as difficult to travel. But travel I did to the incomplete Indarys Manor so that I may see what I can do to attract a larger garrison.

The Blight storm had worked its ways and it feels as though I had to fight off a maddened animal of some kind every dozen steps. Nix-Hounds are the worst of the lot. While weaker than Kagouti and not nearly as nimble as a Cliff Racer, the beasts come charging at you from within the gloom with just the rustle of its feet as a warning. Kagouti and Cliff Racers are kind enough to roar and screech, respectively. Such is life on Vvardenfell.
The caretaker of the manor is an older Dunmer Hetman named Guls. He seemed a little embarrassed to admit that he would have much better success in recruiting additional retainers of the manor had some marriageable young women already waiting for them. I shall have to ask around Ald'ruhn tomorrow. The Hetman did point out that if I cannot find anyone willing to come here, that purchasing slaves is an option. Becoming a slaverowner is a detestable thought, but marriage is probably a happier prospect than slavery. It did work out for Falura.

The manor-house was already complete so I decided to take a tour of what would become my new home eventually. It is a very livable sort of place and has a full staff of servants and guards. Among the latter are an eccentric pair, a warrior and a mage, who share a small room. I say eccentric because the warrior has a fine steel breastplate, a closed steel helm in the Imperial fashion, and an expensive pair of silk leggings with matching shoes. The mage's dress is more appropriate, he only deciding on a Dwemer helmet that, along with the robe, gives him the appearance of a scholarly insect. I do hope the safety of the manor and its inhabitants do not rest on these two. 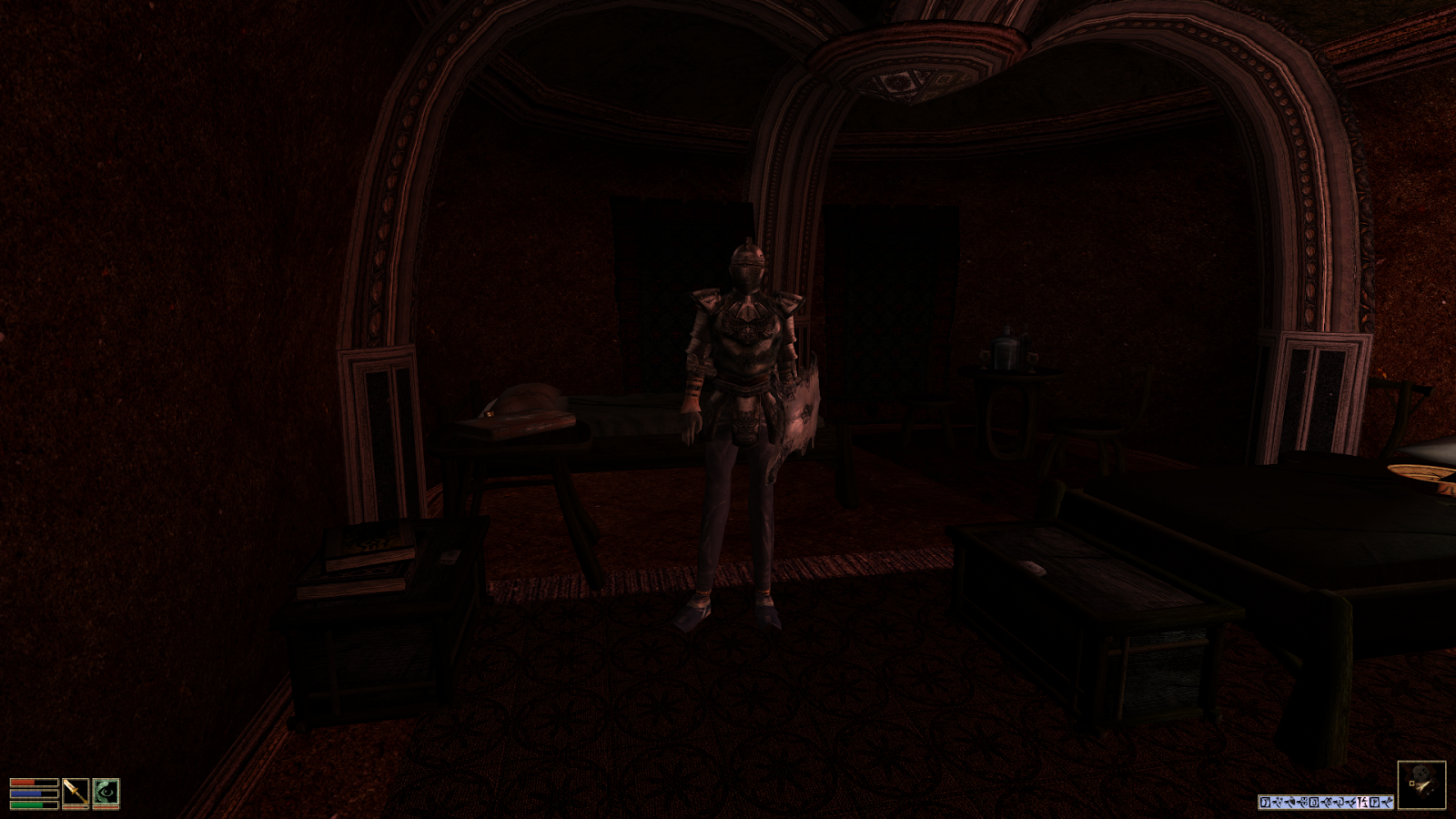 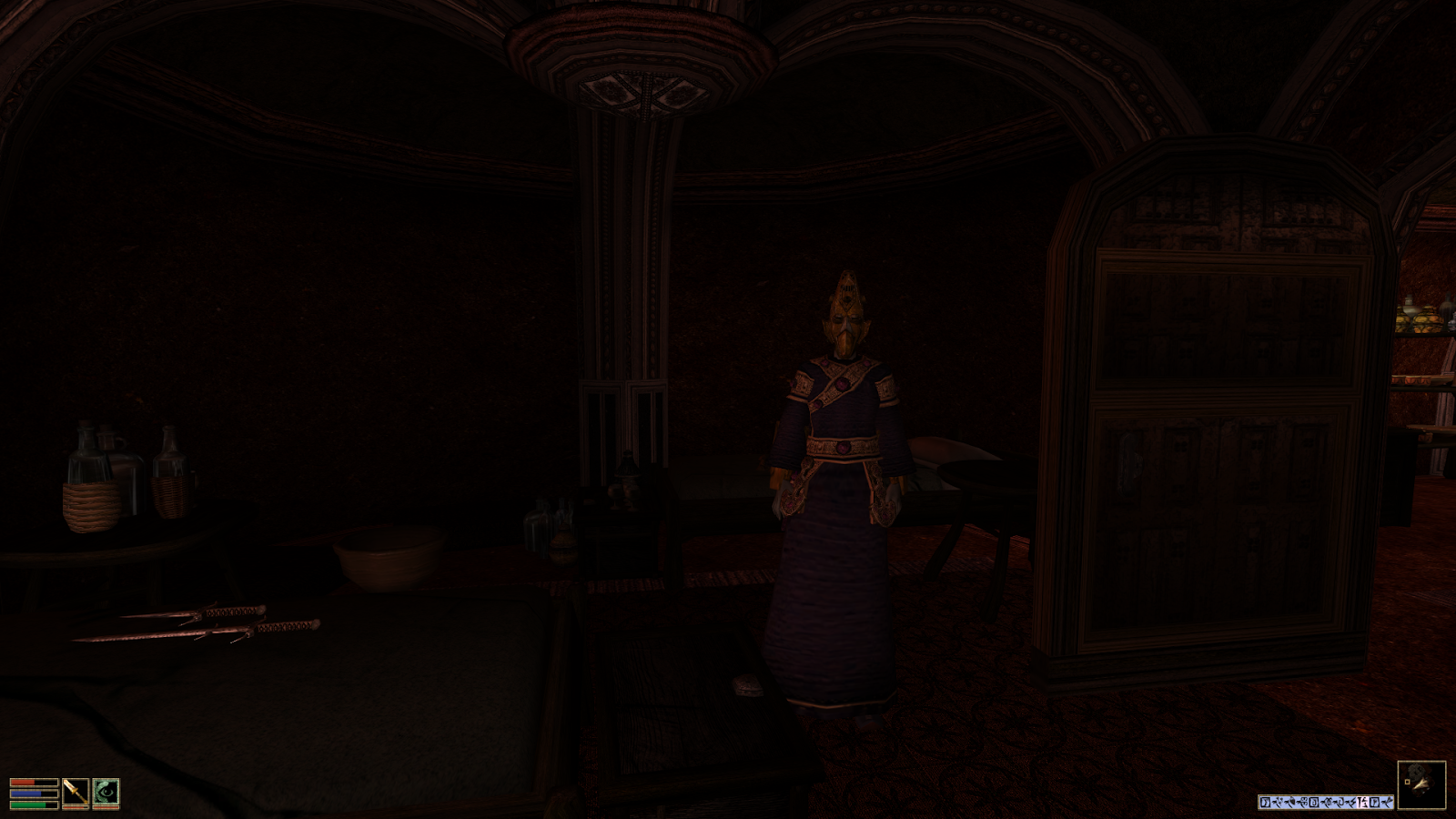 My own room is a big jump up from the cot jammed into the corner of my Ald'ruhn home. I have been furnished with a double bed by a very optimistic carpenter and have shelves and chests enough to store all of my goods. Once the construction of the manor is completed I will have to spend some time in simply moving all of the stuff from Ald'ruhn, though my Recall amulet should make the toil a little quicker.

There was no reason to go back to Ald'ruhn immediately, so I am spending the night, my first, at Indarys Manor. Writing this at the provided table is far more comfortable than cradling a parchment and pen while on a cot. I do believe I shall enjoy being a Redoran Lady, but as always there is more work that needs to be completed. Dagoth Ur also seems to be making more overt moves to expand his influence and I am certainly running out of time.
Posted by Raifield at 5:03 PM
Labels: 20 Sun's Dusk, Ald'ruhn, Day 97, Gnisis, Indarys Manor