2 Evening's Star, 4E201
College of Winterhold
~~~
I found myself unable to rest after the battle I partially led in Windhelm. The conclusion of the civil war elicited excitement and relief among the Imperial soldiers; the emotion was nearly palpable. From what few citizens I saw scurrying about I suspect they'll be wary of the Imperials for quite some time, but I do not believe they will be treated harshly.
The little Dwemer device the crazy hermit near Winterhold, Septimus Signus, gave me some time back has been making a humming noise as of a few days ago. I looked at it as I left Windhelm, ready to throw it into the river if it appeared ready to explode. Through some method unknown to me the device, which consists of four metal tubes attached to each other, is now full of blood. I can only assume that each vial holds the blood of an Altmer, Bosmer, Falmer, and Orsimer slain during my regular encounters with thieves and bandits. As I wanted to visit the College anyway I thought this a good opportunity to lighten my considerable load. 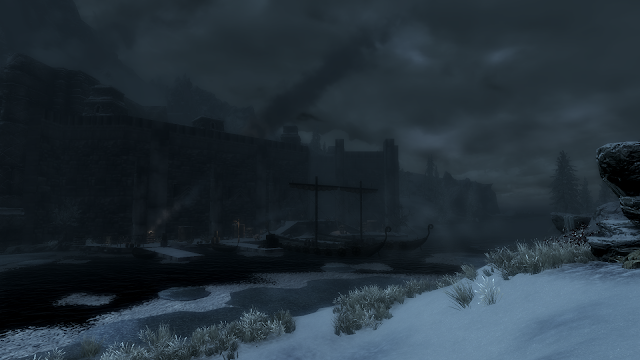 The city did not appear to be overly damaged, but then again the battle did not last very long. The stable just outside the gate was damaged and a few of the farmhouses destroyed, but I am sure the townspeople will rebuild. Their survival in Skyrim depends on it.
The walk from Windhelm to Winterhold was no better than it usually is, the only excitement came in the form of two Trolls who thought me an easy meal. 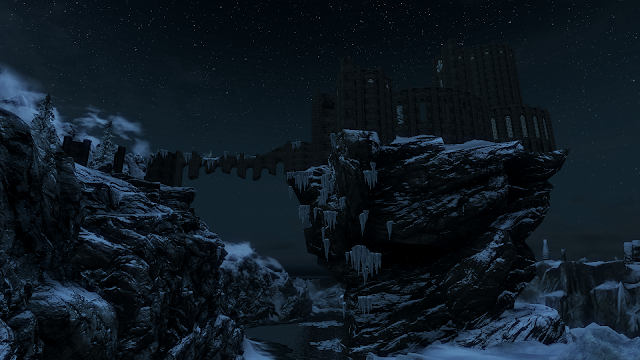 The College always looks to be one strong breeze away from collapsing into the sea, but by the wonders of magic or simple Nordic engineering it persists in its existence. My destination lay beyond the College inside a small cave accessible only by hopping between ice floes while trying not to irritate the resident Horkers. 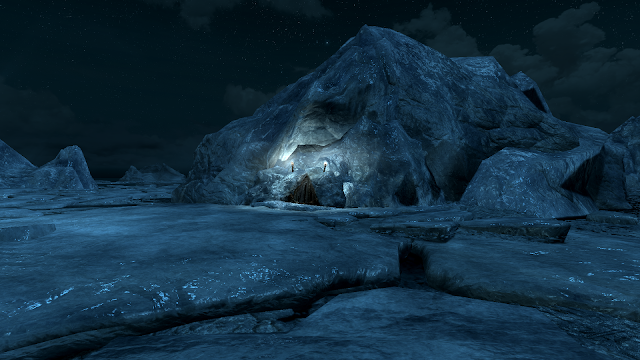 Septimus was still pacing about his cave, muttering too low for me to hear anything. He was still sane enough to recognize me as I carefully stepped down the icy walkway and began to crow about how he could "hear their life energy". I approached the raving man with one hand on my dagger and the other outstretched with his device, but he had eyes only for the strange machine. Holding it in two hands he briefly danced around jabbering about the mixture he needed to make.
I thought the device was going to...do something in a Dwemer-like fashion, maybe link to the giant cube and unlock it somehow, not hold four vials of blood he needed to mix into a potion. I am fairly certain I managed to keep my disgust off my face, but I doubt he would have cared or even noticed if I had failed.
Septimus worked quickly, separating the four bloods each into a small bowl, then adding a sprinkle of powder I could not identify to each one. Once each mixture seemed to thicken he mixed them all into a larger bowl, added a quantity of bonemeal, then lapped up the foul sludge like an animal. Not only did this somehow unlock the Dwemer cube, it also made me wonder why I helped him to begin with. 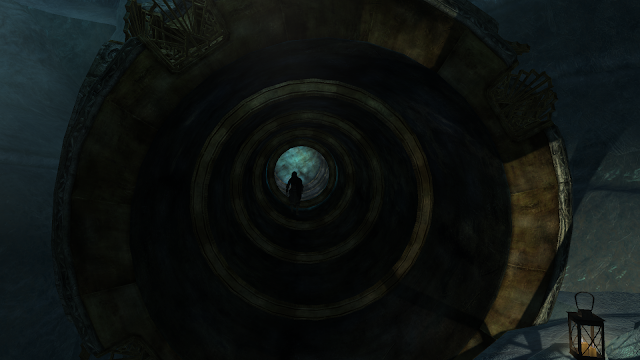 Heedless of the possibility that Dwemer guardians were waiting to dismember him he rushed inside immediately, but the only thing there was a book on a small pedestal. 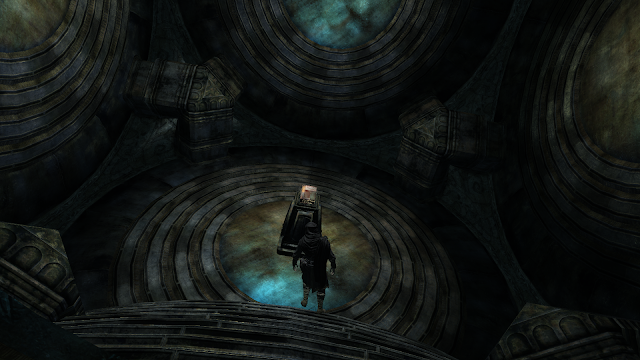 Septimus had time only to express his confusion and displeasure before he suddenly burst into white flames and burned away to ash in a matter of moments. I suspect, and hope, that he felt no pain. I was rather wary about approaching it myself, but something about it felt familiar, so I took the book and fortunately did not suffer flames shooting out of my body. 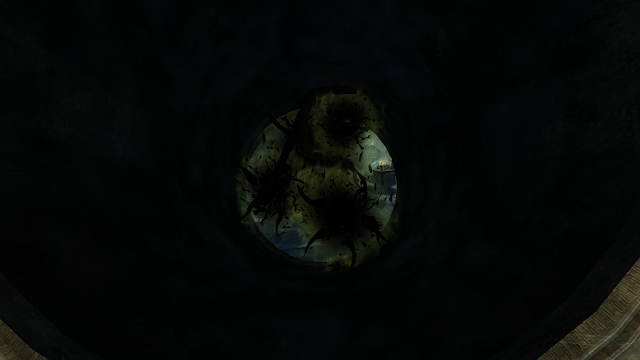 I did, however, experience the extreme unpleasantness of coming face to...something, with Hermaeus Mora, the Daedric Prince of Knowledge. In that instant, far too late, I realized why the book looked familiar: it was the Oghma Infinium, the book of knowledge Rajhin stole.
The ever-changing mass of eyeballs and tentacles was difficult to look at, but Hermaeus Mora is not known to be overtly hostile, so I was not greatly concerned. He welcomed me as his champion, but I was not going to accept a debt of service to a Daedra. He was unconcerned about my refusal to accept his title, stating that everyone winds up serving him eventually. With that, he disappeared and I was free to leave.
The walk back was not any more pleasant and I arrived just as the sun was starting to rise and the College starting to wake. I managed to avoid speaking to anyone while on my way to the Archmage's chamber. 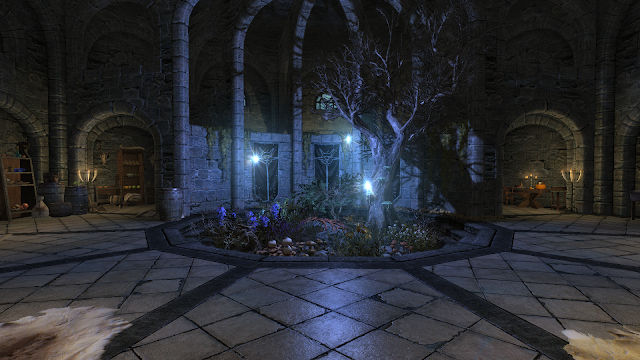 I will not be opening the Oghma Infinium. Instead, I will leave it with Urag gro-Shub tomorrow morning as I leave for Riverwood. A Daedric weapon is one thing, Daedric knowledge is an entirely different thing altogether and not to be trifled with.
Posted by Raifield at 7:00 PM
Labels: Day 101, Skyrim, Windhelm, Winterhold