Serana woke me up impatiently an hour or so before dawn. She had not slept, as usual, and was eager to complete our task at Alftand so that we could return to her family's castle. Her hope was that she would be able to speak with her mother, but Alftand is an hour or so away and Volkihar Keep is on the other side of the province.

Alftand was just as I left it: frozen, broken, and empty. 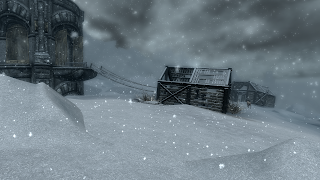 Inside, the strange device which perplexed me during my initial visit showed itself to be the gateway to Blackreach. Inserting Septimus's Dwemer sphere into the device caused the floor around it to collapse, revealing a stairway that led to an elevator into the strange underground cavern of Blackreach. It was unlike anything I have ever seen in Skyrim, though fragments of memories from Morrowind surfaced among the giant glowing mushrooms of Blackreach. 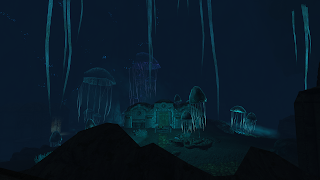 Blackreach was home to a few Falmer and Chaurus that had managed to accidentally trigger whatever method of transportation sent them, plus one Giant whose very existence in Blackreach may be the most baffling mystery I have yet encountered in my very long life. Surprisingly, Blackreach contained almost no Dwemer guardians save for one of the ten-foot tall mechanical soldiers. 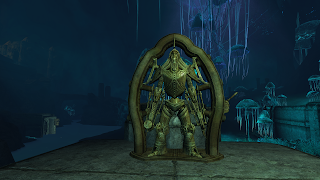 Serana wanted to leave it be but I was unwilling to leave the thing at our backs so long as we were unaware of its trigger. She agreed with my logic. The battle was a short one, the trick is to find which part of the thing is leaking the most oil, then hack away at it.

A bit further on we came upon a small building which had served as the late Sinderion's campsite. Sinderion was an alchemist of some skill who developed an obsession with nirnroot. This obsession grew worse when an adventurer from Skyrim sold him a red nirnroot...a thing I had not previously heard of. The adventurer told Sinderion that the red (crimson, according to him) nirnroot had come from the caverns of Blackreach and likely only the caverns of Blackreach.

Sinderion relocated himself to Skyrim, then into Blackreach. From the arrow sticking in his skeleton's rib-cage, I presume he was wounded by a Dwemer mechanical, retreated to his workshop, then, surrounded by enough ingredients to craft something helpful, died. His journal was dated with the year as well, marking it as just over one hundred and fifty years old. 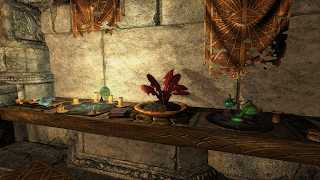 I had no time for crimson nirnroot and no care, but Serana's was curious to have heard of something new since before her one thousand year nap. We agreed to split up, her after the nirnroot, me after the device required to transcribe the Elder Scroll. We would meet back at the workshop in three hours.

There was a giant globe of hazy light suspended from one corner of Blackreach and I thought to look there first for the entrance (an elevator, I assumed) to Mzark Tower, where Septimus assured me I would find what I needed to help him. 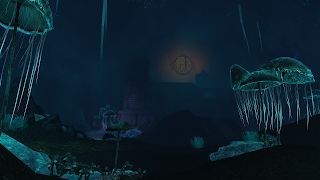 The globe served as a Dwemer-built sun for a small, walled Dwemer village mostly inhabited by Falmer and...for some reason, Nords. They were clothed raggedly and cheaply, but each attacked me on sight. Were they willing servants of the Falmer? Slaves of some kind? I shall never know. 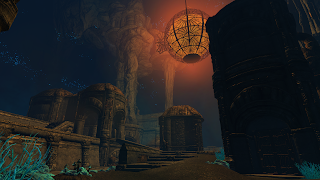 As agreed, Serana and I rejoined at Sinderion's workshop. His journal had called for thirty samples of the red nirnroot, but Serana had only twenty. She may return on her own when this is all over. Together we found the elevator for Mzark Tower and gratefully ascended. I do not know about her, but Khajiit are not made for long spells underground.

Mzark was only two rooms: the one containing the elevator and the much larger one with a device that looked similar to the Dwemer observatory I visited a month or so ago. 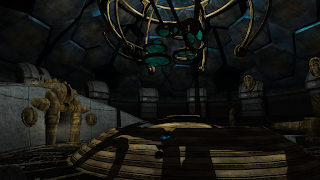 Serana and I figured out how to start the machine: a small cup held Septimus's Dwemer cube. Placing the cube in the cup unlocked two of the five buttons, one rotated the machine from and towards us, the other side to side. With no clue as to what we were doing, we took turns pressing the buttons until we managed to reach some sort of pattern which unlocked two more buttons.

Again, we entertained ourselves pressing buttons randomly until the whole machine shuddered and a Dwemer mechanical arm holding a large tube descended from the ceiling. 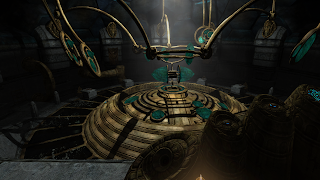 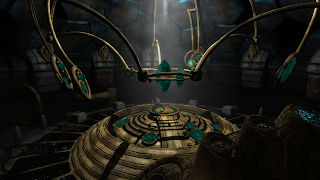 Much to my surprise the tube contained an Elder Scroll...or something resembling one. The Dwemer cube was also changed: engravings dotted the formerly-smooth surface, though I could not tell when that work had been done. All of this has been very confusing.

With the Scroll and engraved cube in our possession we had to walk back to the elevator shaft we used to enter Blackreach and found ourselves, after what felt like a very long day, back on to the frozen surface of Skyrim. 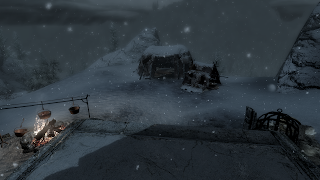 Rather than force myself to walk back to the College I will be borrowing the still-burning campfire outside of the ruin to warm up one of the tents before settling in for what is a well-deserved, if rather cold, rest. I have nearly forgotten what I had set out to accomplish today, but I believe I have done it nonetheless.
Posted by Raifield at 7:00 AM
Labels: Blackreach, Day 77, Skyrim