For all it took to find her book, Jami was not particularly pleased to receive it. Granted, that may be due to my showing up at her home at breakfast, but I have other responsibilities than finding lost tomes. She did extend her gratitude far enough to give me a small booklet of alchemy recipes, some of which I had forgotten over the years.

A distant roar echoed down the mountains and into Morthal as I left Jami's house. The locals, guards included, fled for the nearest doorway, but the Dragon was far away and appeared to be more concerned with making circuits around the mountaintop than descending upon the town. 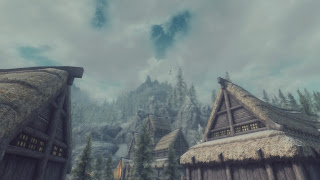 People had begun peeking outside as I passed the last building on my way out. The famed 'Dragon War' of the Mythic Era is not restarting, it seems. The tablets I read on the way up to the Greybeards spoke of battles in which thousands died fighting against the Dragons. Now one Dragon is sighted miles away and everyone runs away.

I still question the wisdom of the Stormcloaks in allying themselves with the Dragons, as the creatures do not appear to be interested in aiding them in any way that I have seen. For their own part the Stormcloaks are just as willing as the Legion to sit and wait for the other side to do something and the Dragons have not changed this relationship.

But no one else looked eager to climb the mountain only to die in a fiery blaze, so that was left to me alone. The creature's roars continued to echo down the mountain as I trudged through the ice and snow to the base of the hill, only to find that the mountainside rose almost directly vertical, making it impossible to ascend without finding a prepared path of some sort. So with a Dragon spiraling overhead, I worked my way around the base of the mountain in search of a path of some kind.

I did not have to search long. For as long as they have been under Imperial rule, the Nords still have not shaken their habit of worshiping outside. Whether out of preference or a desire for privacy most of their shrines are built near or on the mountains and naturally they would want an easy way to reach their Divines. 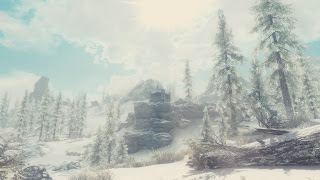 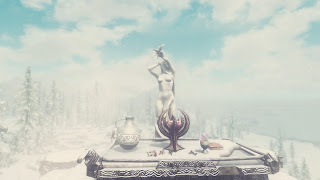 This particular shrine was to Dibella and maintained by someone, as there were fresh flowers adorning the altar. I deigned to receive her blessing for I am quite certain it would be quite useless for me. The Dragon, not a lover, awaited me further up the mountain. Fortunately, the path to the altar continued to a destination I should have thought of earlier.

Whatever motivates a Dragon this one was motivated to simply fly around in circles above my head, roaring frequently and taking no notice of anything or anyone scampering underneath it. I scared a small family of goats as I scurried from rock to rock to remain unnoticed and I feared the animals would alert the Dragon to my presence, but it truly had no interest in what was happening around it. 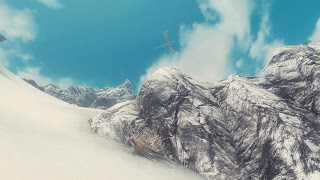 I finally reached the top of the hillside to find myself looking down at another wall of ancient words, one I visited some time ago, though I cannot remember exactly when. The Dragon completed another circuit around the area, then settled down atop the monument, seemingly content to perch and survery the area around it. 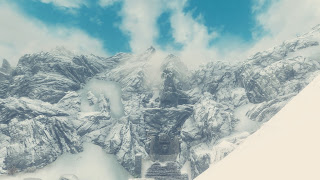 Out of curiosity I had taken a bow from one of the Forsworn a few days ago, wondering at how effective such a poor-looking weapon could be. I found that the appearance was quite deceiving: the wood and sinew used was nearly unbreakable and took a terrific amount of effort to pull back. It was like trying to pull back a crossbow without a winch or belthook.

I had managed one wildly inaccurate shot when I found it and figured an arrow whizzing by its head would serve as a good challenge for the Dragon. After a few moments of straining and grunting (a wonder my exertions were not heard!) I had an arrow pointing somewhat in the direction of the Dragon, the arrowhead wavering and dancing with the strain of keeping the bow pulled.

I let it go, sending the arrow shooting forwards, the bowstring nearly shaving the fur off of my left arm. The Dragon started and looked right at me, noticing me at last. I did not see where the arrow ended up, possibly somewhere in High Rock. I then lost my grip on the weapon, sending it clattering down the hillside. If the arrow had not alerted the Dragon my bow's descent certainly would have.

Now it was one Khajiit with a wooden shield, Ebony long blade, Ebony dagger, and a useless repertoire of Illusion magicka against an angry, territorial Dragon.

My experience with Dragons so far is that they are arrogant and are easily riled to a challenge. It was a bad sign that my only hope of survival was to unsheathe my sword and entice the Dragon into melee combat.

It worked, but not exactly to my relief. 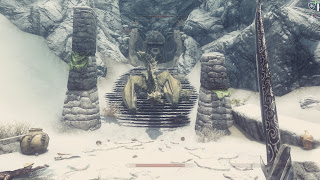 The Dragon's tail was different than the others I have seen. This one had fins on the end of its tail, forming a sort of fan. The wings were the same though, as was the head.

It crashed onto the ground in front of me, glowering and shaking its head back and forth. Perhaps it was challenging me? I do not know. Sometimes I think I can hear them speak, other times they appear no wiser than a common animal. This one was not wise and died unceremoniously to a blade through the eye. Being the Dragonborn is a brutal business. 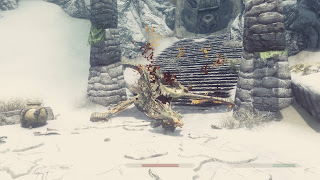 I continued to Winterhold with only a single troll as further disruption. A Dunmer calling himself 'Malur' approached me in front of the Inn hoping to hire someone to steal a staff from the College. The irony of asking the acting Archmage to do this thing went nicely with the implied insult that Khajiit love to thieve and steal. I stopped inside Birna's shop, but she had little of interest to me.

I told Tolfdir of the magicka globe I had fought off a few days ago and he was pleased to hear that the "Jarl's disturbance" had been taken care of. I was not aware a complaint had even been lodged against the thing, I do not think a courier would have cost the College too much coin. Despite the poor communication the problem was solved in the end and Tolfdir parceled out the Jarl's payment, some for the College, some for myself. It was an odd exchange.

The Dragons continue to be a puzzlement for me. I am told I am Dragonborn, just as I was Nerevarine, both constructed falsehoods, of course, but being the Nerevarine meant working towards something. The Dragons act more aloof than violent and do not seem to be aiding the Stormcloaks as I thought they would be. Are they conserving their strength or am I misunderstanding the situation? The Civil War is ongoing, but going nowhere.

At least this night will be spent comfortably as I ponder all of this.
Posted by Raifield at 7:00 PM
Labels: Day 69, Skyrim, Winterhold