Waking up alone again was a great relief, a freedom from a burden I am not accustomed to carrying. What I am accustomed to carrying is a long list of tasks I have promised to resolve for people all over the province. One was the delivery of the late King's war horn to a shrine of Talos east of Whiterun, near the river.

While on my way out of Solitude I stopped at the local apothecary, bought some supplies, and added another task to my list: locate and return a ring said to posses an alchemy-enhancing enchantment. The alchemist, an old woman named Angeline, admitted she and her niece could use the ring's help with keeping their shop profitable. This surprised me, but I suppose having the East Empire Company housed in the city undercuts her business.

Angeline had already purchased the ring from a traveling mage of the College, the man having promised to send the ring to her after he returned to Windhelm. She received a letter a week later saying it would be on its way via a caravan, then...nothing. Her inquiries resulted in an apologetic letter clarifying that the road between Windhelm and Solitude was frequented by bandits, but he was not responsible for its loss. Her money, naturally, was not returned.

So I was to search a road spanning nearly the entire width of the province for bandits carrying a small enchanted ring. I agreed, it would give me something to do for the next few days, or so I thought.

I left Solitude and followed the unmistakable sound of hammer-strikes against an anvil and in this way "found" a not-so-hidden camp of Stormcloak rebels. They turned to me and I nearly fled right then, but one stood up and greeted me rather jovially, asking if I was from one of the caravans. I was not, but they still bought some gemstones from me and bade me return if I was in the area. Strange, for I expected hostility.

Stranger still was my encounter with an Imperial Legion patrol not more than two minutes later along the road, the sounds of the Stormcloaks' blacksmithing ringing clearly in our ears. The three Legionnaires were pointedly not hearing it and walked along the road, not more than a hundred yards from the rebels, without a concern. This "civil war" seems to have not yet started in full.

Dragon Bridge was fortunately free of live dragons and I made good time, passing Morthal before noon. Near Stonehills I ambushed a trio of dragon-mask cultists, announcing myself by slaying one of them outright. Their fire magicka was surprisingly weak and even what little resistance I had owing to my own experience with spells nullified much of their force. One of them had a note on his body that alluded to a cultist shrine somewhere in Labyrinthian, the ruin where I had been sent to retrieve the Staff of Magnus. Another thing to worry about now.

A Khajiit caravan came upon the remains of my little battle as I was rifling through the cultists' meager possessions and they politely pretended to not notice anything unusual as they marched by. Through with searching the bodies, I hailed their leader, Ri'saad, and asked about any rumors of bandits between Dawnstar and Winterhold, as I had not found any from Solitude onward.

Ri'saad told me of a group of bandits near the crossroads between Dawnstar and Windhelm who were occupying a cave near the road. The caravan had no issues passing by, but he had been warned of them before leaving Windhelm and they were known as a troublesome group. He felt certain that my ring would be found with them. In thanks I discounted my offers to him and we parted amicably. After I was a fair distance down the road I looked back to see them stripping the corpses of their clothing and mundanes. Anything for a Septim, I suppose.

Scouring the crossroad revealed a small cave on Windhelm's side, but inside were no bandits, just a dead vampire, a very live giant bear, and a Spriggan which managed to surprise me after successfully pretending to be a small tree. For whatever reason it only attacked after the bear was dead, so its ambush caused me no trouble. What I assume is Angeline's ring was in a half-frozen chest in the back of the cave, the only sign that the bandits had been there at all.

Coincidentally the shrine to Talos wound up being almost exactly due south of the former bandits' cave and I needed only walk along the road to Whiterun for an hour or so to reach it with nary a problem. Once I found the shrine I had only to kill two Thalmor agents sent to destroy it, take the horn out of my pack, and lay it reverently at the feet of Talos. 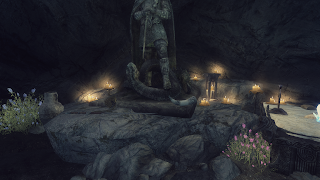 I returned to Whiterun, the  city I cannot seem to escape, and stopped at Warmaiden's to make use of their forge. My armor needed repair and I wanted to experiment (and probably ruin) with a steel sword I found to see if I could heat the blade enough to introduce silver into the metal, which is said to make weapons cut vampires and werewolves more effectively. After several attempts and a great deal of patience I think I managed it, but I shall see if Adrianne can examine it tomorrow, just to be sure.

After that the only thing left to do was aggravate Lydia with my presence at Breezehome, but while her facial expression did not change, her mood seemed to be a bit better. I wonder what occupies her here while I am away. 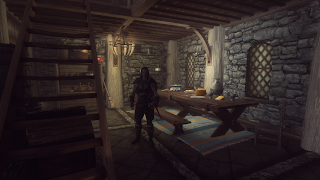 Labyrinthian is not terribly far from here, I think I will pay it another visit and see if I cannot figure out what the cultists are after.
Posted by Raifield at 7:00 AM
Labels: Day 55, Skyrim, Solitude, Whiterun