I am looking around me and I certainly do not remember Falkreath looking like this. But then, I am not in Falkreath tonight, but another ruined fortress, surrounded by bloody, cooling bodies.

I left the ruined fortress of yesterday and made my way down the road towards the Pale Pass where I had been captured by the Legion over a month ago. Along the road lay a cavern known locally as 'Southfringe Sanctum' and said to have been occupied as late by a powerful group of necromancers and spellswords. I felt that I would have little to fear from another yet another group of bandits.

As it turned out, they were a bit more than simple bandits and had they been capable of exercising anything like caution, discipline, or strategy it would have been a hard-fought battle. But it was not. Their lookout was too busy experimenting with his camp alchemy table to notice a Khajiit sneaking up behind him with a dagger and a list of other things to do after his death. 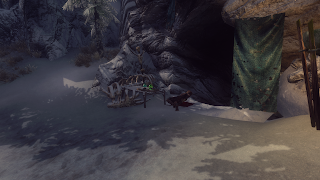 This self-centered behavior repeated itself throughout Southfringe: two men died at their own alchemy tables inside, one at an anvil, and another with a mining pick in his hand instead of a blade. Their leader, an Orsimer I later found was called 'Bashnag', died to two thrusts of my dagger while he was studying an enchanting table. 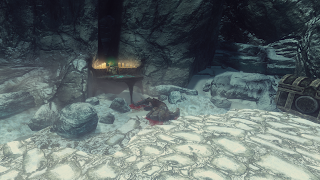 Runil's journal was in a chest sitting on the floor next to the table, but as I turned to leave with it I heard a woman's voice begging to be let free. There was no one in the main chamber, but pushing aside some small, hardy bushes revealed a small passage directly behind where Bashnag had been standing. 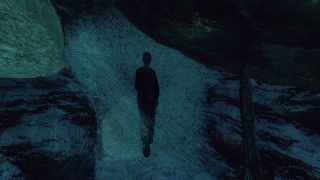 The voice belonged to Selveni Nethri, a former necromancer of Bashnag's. Accused of practicing necromancy in Riften, she was driven off and her daughter taken to the local orphanage. Selveni wandered around for days in grief and confusion before finding Bashnag's mages, whom she successfully ingratiated herself with. However, she had not forgotten her daughter and stole away back to Riften for a few days in an effort to find her child. The orphanage no longer had her and Selveni crept back to the Sanctum to plan her next move.

But Bashnag had noticed her absence and accused her of conspiring with the Thalmor, an unlikely happenstance given that Selveni is a Dunmer. Bashnag used some sort of spell to drain Selveni's magicka and chased her deeper into the Sanctum, eventually trapping her in the spiderweb I cut her down from.

Unable to cast her spells, she asked that I make sure the way out was clear. I agreed and she kept well behind me as I left the Sanctum, though nothing further barred our way. We stepped outside together and she wished me well, stating that she was planning on traveling the rest of the province to find her daughter. I wished her luck, though the difficulty of such a task must weigh heavily upon her.

With Runil's journal in my possession I began the walk back through Helgen and to Falkreath. Nature offered me a chance to try my new soul-trapping spell and after a short battle I was the somewhat proud owner of a soul gem occupied by a Spriggan. We all start somewhere.

The old Altmer had mostly concerned the journal with his daily religious responsibilities, but one entry complained of nightmares he felt originated from his time with the Thalmor (interesting!) during the Great War. In the nightmares he was leading his battlemages against the Imperials, but this time there were great creatures in the sky, swooping down on friend and foe alike, killing indiscriminately. A Dragon or perhaps several Dragons, he did not make note of it.

One of these Dragon-dreams suddenly shifted him to his present role in life and the dream hinted at a great power just out of the corner of his eye, but when he turned to look, it disappeared with the roaring of a Dragon. Then he woke up. Yet another mention of Dragons, this time by someone uninterested in them. A portent of things to come? Or just the manifestation of an old soldier's guilt? I doubt Runil knows.

With that task complete, I looked to my journal for one that might be close to Falkreath. I had written a reminder to investigate the rumors of an ancient Forsworn warlord known as 'Red Eagle' who lived during the First Era. According to my notes, it was said that his blade was still kept by the Forsworn with their hope to use it one day to summon his spirit and drive everyone else out of Skyrim.

I rank the Forsworn just below Draugr in brains and co-habitability and the thought of stealing their hope away was an appealing one.

Before leaving Falkreath I traded in my bow and arrows for another crossbow and bolts. The crossbow may be heavier, but it is much easier to use, especially when I do not wish to be seen. Lod was pleased with his acquisition of my Glass bow, an item he assured me would not be languishing in his shop for long.

Back on the road I went. I briefly stopped at the side of the road to examine a small pond and was quite alarmed to turn around and see a glowing red door set into the hillside behind me. 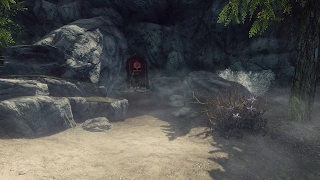 The door was solid stone and carved with the visage of a skull with a bloody hand-print. Underneath it lay a skeletal corpse sitting atop a pile of more skulls, one of which had a dagger embedded in it. Clearly style meant more to the group behind the door than subtlety, whomever they were.

Curious, I knocked on the door and a rasping voice responded, asking me what the music of life was. I guessed the lute and was coldly rebuffed. Oh well. I never much enjoyed the lute anyway.

The resting place of the warlord 'Red Eagle' was somewhere between Markarth and Solitude, but I guessed that the ancient Forsworn would be closer to his people than otherwise. It took me a but of exploring, but my hunch proved to be correct,  though I would not realize that until after dispatching a small host of Forsworn.

It was night when I found the decaying remains of what appeared to be a temple cut into the hillside. Stairs led the way further up the hills, but Forsworn were all over the area, making me suspect at the time that I had found the resting place of Red Eagle. 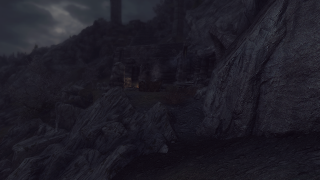 The Forsworn lack the magicka-enhanced senses of the Draugr and, aided by the night, I probably slew two dozen of the bizarre cultist-rebels without them realizing they were even under attack. One was seated upon a throne at the conclusion of the stairways and upon his body was a key and a chipped, rusted sword with a minor enchantment. Trusting my hunches again, I figured it to be the legendary blade, poor as it looked.

A nearby pamphlet described the ritual to raise Red Eagle from his rest: bathe the ancient blade in human blood and present it at a nearby cairn creatively named 'Rebel's Cairn'. There was also a chant to accompany the return of the blade and I was curious to see what would actually happen if I went through with it all.

But by then it was after midnight and it had been a very long, busy day for me. I may nap for a few hours in one of the Forsworn tents, then see about this ritual.
Posted by Raifield at 7:00 AM
Labels: Day 42, Falkreath, Red Eagle Redoubt, Skyrim, Southfringe Sanctum