After a not-very restful nap outside of Ansilvund I was back on the humid road through the springs. I had not gone far before a thief (not a Dark Brotherhood assassin, surprisingly) jumped out of the bushes, literally. I suppose one could commend the man for tradition, if not creativity.

The worn and dirty Imperial leathers marked him as a likely deserter from the Legion, though the Elven dagger suggested something more nefarious. He demanded my money or my life and I asked him if I looked like I was willing to accept either of those two options. I recommended that he walk away if he wanted to live and to my surprise, he did, backing away and jogging down a path into the hills. Smart man.

The next individual to ambush me was a Khajiit hiding amidst the snow drifts near Windhelm. This time my assailant was a Dark Brotherhood assassin and wielding an expensive Elven sword. I would like to know if the assassins bring their own gear or are equipped by the Brotherhood. It would make putting up with the constant attacks a bit easier knowing I was steadily bankrupting enemies I am not sure how I made.

When I arrived back at Winterhold I visited Birna's shop, sold off some jewelry and gemstones, then hoisted the very heavy dragon claw I purchased from her, with the intention to figure out what to do with it later that day. Like all of my plans, this one did not meet with fruition.

Enthir was gruffly appreciative of having his staff back and handed me Onmund's amulet, a simple gold medallion with a small ruby set inside. Onmund was surprised to see his amulet again and even more to be given it unconditionally. He pledged his undying loyalty, but I assured him that was not necessary. I have not been at the College long, but it is clear that there is no harmony among the students. They will need that once I leave and I hope my easing their personal burdens will allow that to grow, even just a little.

Speaking of the lack of harmony, I tracked down J'zargo next to report on the explosive nature of his scrolls. At my approach he purred that his scrolls had no doubt been magnificent and deflated only slightly when I informed him that they also exploded. Violently. He promised a review of his technique and proudly stated that I had earned the right to fight by his...whenever I needed him. A bit contradictory, but the gesture was appreciated nonetheless.

That left only Arniel and his Dwemer cogwheels. Though not a student, he had approached me about sourcing ten cogs from the Dwemer ruins that dotted Skyrim and I agreed, not realizing at the time how large the things were. I stopped to talk with him while on my way out and inquired as to where the closest ruin was. His answer: Alftand, a few hours walk southwest of the college.

In any other province the distance from Winterhold to Alftand would have taken less than an hour to traverse, but this is Skyrim. I had to contend with a snowstorm during the entire walk, almost plummeted off of cliffs that suddenly appeared in front of me, and was attacked by wolves several times. I finally came upon a crevice marked by Dwemer ruins and eagerly went in, assuming the entrance to Alftand was somewhere just in front of me. 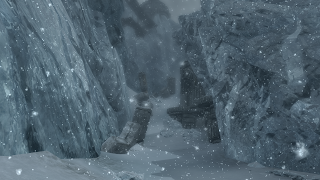 The wind funneling between the hills nearly knocked me flat as I trudged through the snow, but my perseverance paid off, or so I thought. Near the termination of the crevice sat a ruined tower which I thought was the entrance to the Dwemer ruin. 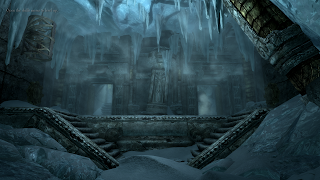 Alas, I was wrong. The tower was just that and each of the two doors inside only led to a single room. It was only when I left the tower that I saw the scaffolding above me, at the lip of the crevice. 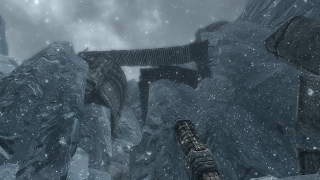 So it was back through the little canyon, this time against the freezing wind and around to the top of the hillside, where a collection of hastily-built, dilapidated cottages suggested the origin of the scaffolding that led to the entrance of Alftand. A journal, forgotten and frozen to a table inside one of the cottages, was recently penned.

Its author, Sulla Trebatius, seemed to think that his expedition of seven had stumbled upon a hidden vault of vast treasures and had a notable bias against the College, going as far as to hire an unaffiliated mage at great cost to himself. The journal was only two three pages long and served only to record who had gone into the ruin, not what had happened.

The upper level of the ruin where I and the expedition entered from opened to a cavern of ice. Not far in was a camp site in disarray, the frozen blood spatter suggesting a very rude awakening. Sulla had left another journal here, lamenting the destruction of one of the Dwemer's spidery automatrons, even after it had almost killed two Khajiit that were part of the expedition. Ominously, the journal ended with Sulla wondering to himself whether he had just seen something "humanoid" out of the corner of his eye. Excited, he penned his plan to move the expedition further into the ruin to investigate.

The fool. Anything looking even vaguely human in a Dwemer ruin was almost certainly going to be Falmer and not just one of them. I followed the trail of blood and began to hear someone muttering, quite clearly a Khajiit, one of the two brothers Sulla had hired to swing pickaxes. As I drew closer the muttering became shouting and I thought he was arguing with someone, but if he was the dead body he was standing over was not much for conversation. 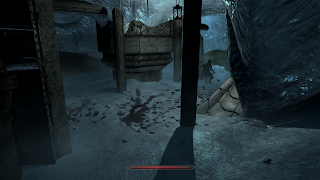 When he saw me the mad Khajiit screamed and charged at me with an axe. That did not end well for him.

The ice gradually gave way to the hot gouts of steam and warm metal floors that the Dwemer preferred, but I found no trace of the rest of the expedition, nor of Falmer. I proceeded cautiously, fought a few spider-things, and found three Dwemer cogwheels.

The deeper I went, the more I found evidence of Falmer living somewhere further below. Fresh blood splattered near bedrolls was the most obvious, but then I began to find discard equipment the creatures regularly glue together from the Chaurus they breed and raise.

I found another one of the expedition members, dead of course, wedged into a small corridor beneath some Dwemer machinery. The man scrawled a final message on a piece of parchment, confirming my suspicion that Falmer ambushed and wiped out the small group, though it did nothing to explain the murderous Khajiit rambling near the entrance. Skooma, perhaps.

The group was not prepared for the ambush and they panicked, half of them fleeing for the surface, two of them missing, and the remainder, Sulla and his bodyguard, actually descending deeper into the ruin. What a disaster.

Below a broken spiral ramp was the body of the Orsimer, simply named 'Yag'. Sulla had hired her to keep the laborers, the two Khajiit, in order, but according to the body of the man I found in the alcove, Yag had stuck with him during their retreat, flinging him on to the broken platform before evidently expiring from multiple arrow wounds, all of them fletched in the distinctive style of the Falmer. 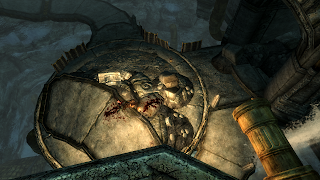 I clambered down some pipes near the edge and peered over the edge of her final resting place. Falmer huts were haphazardly scattered on the floor below, but none were occupied. Behind a door guarded by a Dwemer flame-throwing trap I found the Falmer, in all of their misshapen, hideous glory. 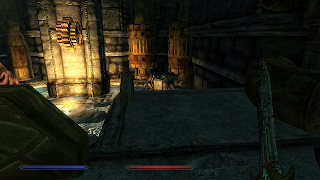 They are said to have exceptional hearing and be able to track their prey by scent alone, so I must be getting much better at sneaking about, for every one I killed, save for two, was from behind with my dagger, silent and instant. Good to see I am getting back into my "old" ways, though I do recall that none of those ways involved effective stealth then.

Sulla's rogue mage, the Altmer Valie, was shackled to a Dwemer table when I found her. The Falmer had eviscerated her, hopefully after she died. 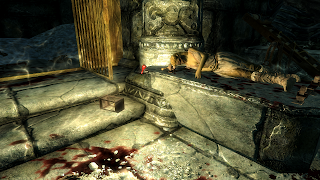 Beyond Valie's violent end was either the end of the ruin or the beginning of it judging by the battlements. 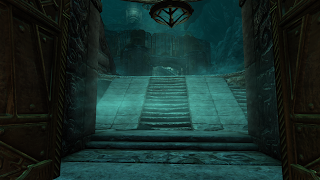 After dispatching the Falmer that were sulking about I opened the Dwemer gate and started to walk across the small plaza when a scream suddenly erupted on my left. 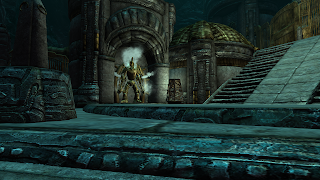 It was not a scream from a foe, but the sound of a lot of steam being sent through ancient pipes...I guess. Whatever caused the sound also activated a giant Dwemer machine built to resemble a Dwemer warrior. A massive war-hammer served as one of the thing's arms, the other a battle-ax. If it had other abilities I did not wait around long enough to see them. A dagger against a semi-living siege engine did not seem a fair fight. As I fled, I noticed that the thing had a companion opposite it, but it had long since fallen to pieces.

The machine did not appear to be able to navigate stairs, so once I was on the top of the stairway I felt like I could finally relax...just as two people walked inside the ruin from the door in front of me, each arguing hotly with the other. 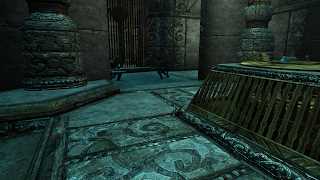 Their argument identified them as Sulla Trebatius and Umana, the pair which Sulla's journal described as loyal and inseparable. I was surprised to see that Sulla was no scholar, but a powerful-looking Legionnaire. Opposite him was Umana, a Redguard with an axe and a cruelly spiked buckler. As I sneaked behind a pillar their arguing grew more violent only to be cut short with a gurgling sound. Umana had smashed Sulla in the throat with her shield, the spikes ensuring his life was extinguished quickly.

She muttered something and started to search the twitching corpse, no doubt very surprised to suddenly find my hand over her mouth and my blade in her neck. So ended Sulla's expedition to Alftand and I never learned what he thought he was going to find here. As for me, I found eight Dwemer cogwheels, two short of what I had sought.

I thought it was close to midnight when I finally emerged from underground and was a bit confused when the sun rose during my walk back to Winterhold. The College was settling down for breakfast as I dumped the cogwheels on the floor. 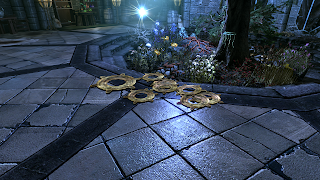 I hope they can eat quietly, because I am going to bed.
Posted by Raifield at 7:00 AM
Labels: Alftand, Day 29, Winterhold