Even utterly exhausted I could find little rest on the stone slabs of Markarth's inn. After a few hours of tossing and turning I gave up and walked out. I had only one task tying me to Markarth: the retrieval of Lisbet's golden statue which her store was relying on to remain in business.

Lisbet named a small bandit hideout, 'Bruca's Leap Redoubt', which she said was located along the shore of a lake to the northeast between the hills. How she knew the statue was there was one of so many mysteries.

I left Markarth as the city's residents were settling down to dinner and knew I had a long, dark walk ahead of me. Fortunately, it was a long, dark, and very boring walk and I reached what I took to be the Redoubt well into the night. The Forsworn who had ambushed her caravan dropped one-by-one, felled by an unseen Khajiit with a crossbow. The night has its advantages. 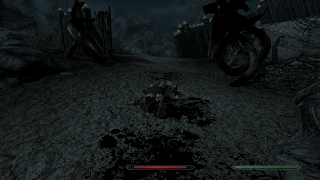 The inside of the Redoubt's cave was brightly lit by torches and very small. The passage led to a small room where two Forsworn were busy attending to a Forsworn corpse arranged upon a table and I managed to kill one of them with the crossbow before my presence was made known. The surviving Forsworn bravely attacked me with his "sharp rock tied to a stick" axe and I was kind enough not to drag the combat out longer than it had to be. I could not determine what had killed the man on the table, but my curiosity about his fate netted me a beautiful garnet nonetheless. 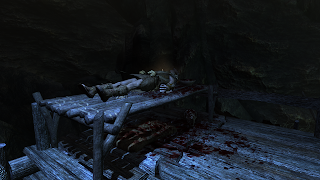 Lisbet's statue of Dibella was in a large chest wedged in the corner of the room, alongside a powerfully enchanted circlet and Dwemer shield. It seems Lisbet does not deal in everyday items.

I judged it to be almost midnight by the time I walked out of the Forsworn's little hideaway and I knew Dragon Bridge was nearby, so I headed further down the road towards what would be at least a passable bed. 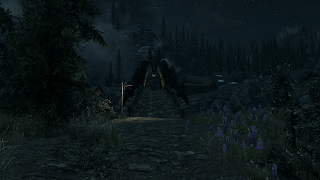 While I now have to walk back to Markarth in the morning the promise of a bed one can actually rest upon is a trade-off I am willing to accept.
Posted by Raifield at 7:00 AM
Labels: Day 18, Dragon Bridge, Markarth, Skyrim