3 Evening Star
~~~
What a day! It started with combat against something that was clearly not a werewolf and ended in my very own Nord mead Hall. I like to think the gains I have made today balance out the drudgery of visiting the Skaal's stones.

My day began two hours after it last ended, the very short nap plus the chaotic events of yesterday lending me more energy than I would have had otherwise. Barred from the Skaal village, it seemed a good idea to eliminate this 'Udyrfrykte' which I had assumed was a werewolf.

It's lair was extremely, and foolishly, close to the Hall itself. I anticipated a long trek and received a ten second walk to the lake where its formerly frozen-shut lair awaited me. It was a very small lair and I could certainly understand why a creature trapped inside of it for any length of time would finally exit quite angrily.

I heard and smelled the creature before I saw it. The unmistakable sounds of bones breaking and the tearing of flesh filled the tiny corridor I was cautiously walking along. When I turned the only corner, I was faced not with a werewolf, but a giant man-like monster with shreds of flesh hanging from its mouth and a gore-stained leg clutched in its hand. I have faced many a foul beast so far, but this thing had the strongest aura of animal rage and violence that I have ever encountered. 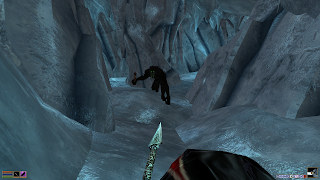 Several arrows jutted from its body, no doubt from the former warriors of the drinking Hall. If they were causing the beast any pain it did not show it, balancing itself on two legs and an arm as it loped towards me, swinging the unfortunate Nord's leg in its free hand. If the arrows jutting out of its back gave it any concern, it did not show it.

I, however, got a much luckier shot than the Nords had. My first arrow went straight into its eye, stopping its charge immediately and my second slammed into its throat, sending it sprawling. I gave it no chance for recovery and leaped upon it immediately, repeatedly stabbing it in the neck with my spear. The beast's thrashings ensured that I was covered in foul-smelling blood, but it was dead. Aware that I needed to bring back proof of my victory (other than a coating of blood), I carved its heart out of its chest, partly for a trophy and partly to ensure it stayed dead.

The rest of the cave was littered with the remains of warriors not as lucky as I. The 'Udyrfrykte' slept on a nest of frozen grasses and skulls and incomplete skeletons, with their weapons and armor nearby, were in every corner. 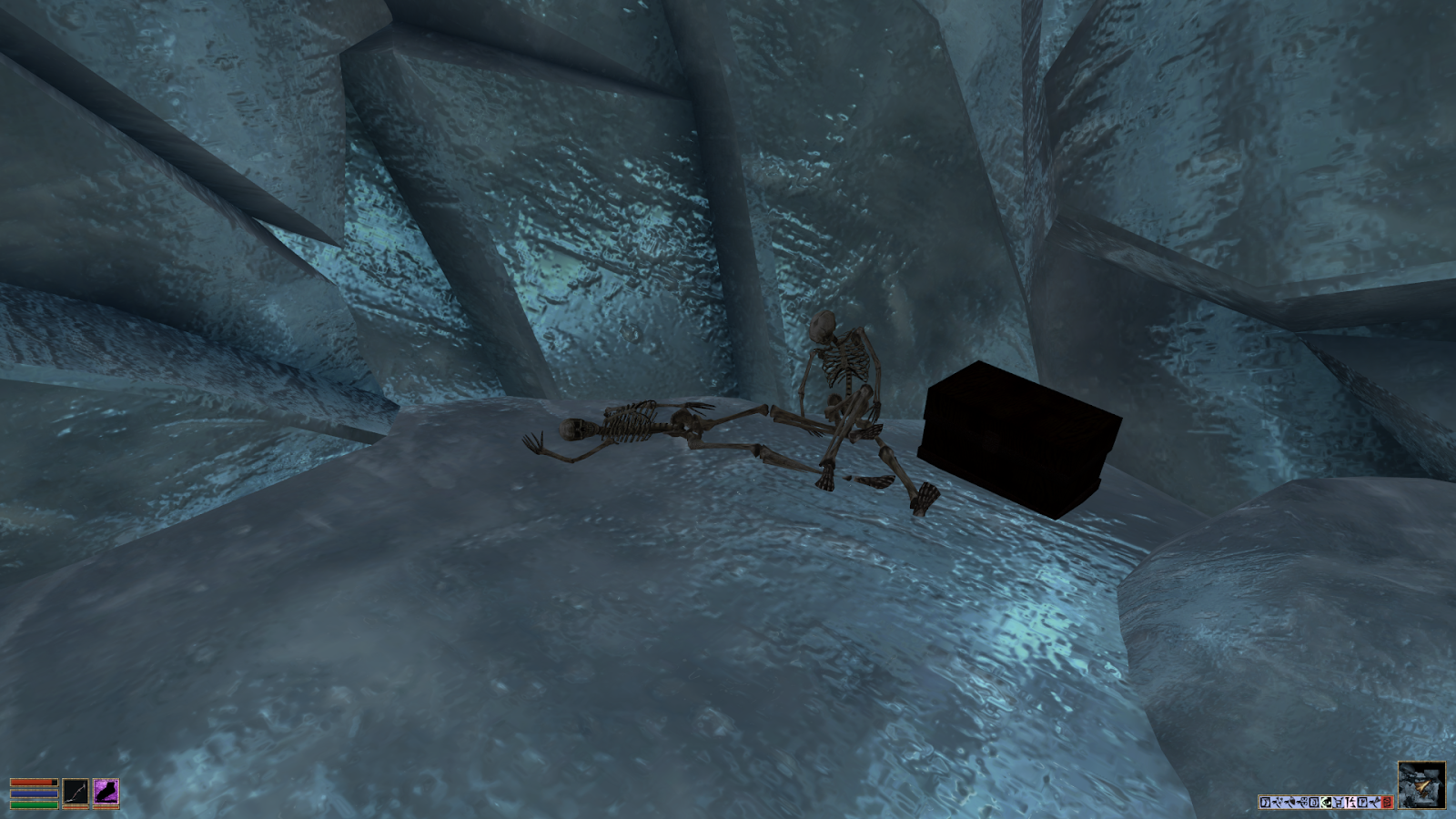 The Hall was closed for repairs when I returned and I spoke with a Breton bookseller outside who was working on his latest edition of 'Thirsk, A History'. I wonder how much a book like that would really be in demand, but it must keep the man fed somehow.

Svenja was overjoyed to have the monster's heart dropped into her hands. She declared that the heart would sit on the pedestal of Thirsk and that I had but one more task, as always, to complete before I could be named Chieftain of the Hall.

She asked that I go to 'Hrothmund's Bane' across the stream to the west. By coincidence this was also the place the Ald'ruhn mage, Louis Beauchamp, had said his amulet was to be found in. For her I needed only to touch a large battle-axe that lay within the cavern to receive Hrothmund's blessing. Rare are the opportunities to solve two problems at once, so I readily agreed to Svenja's request. 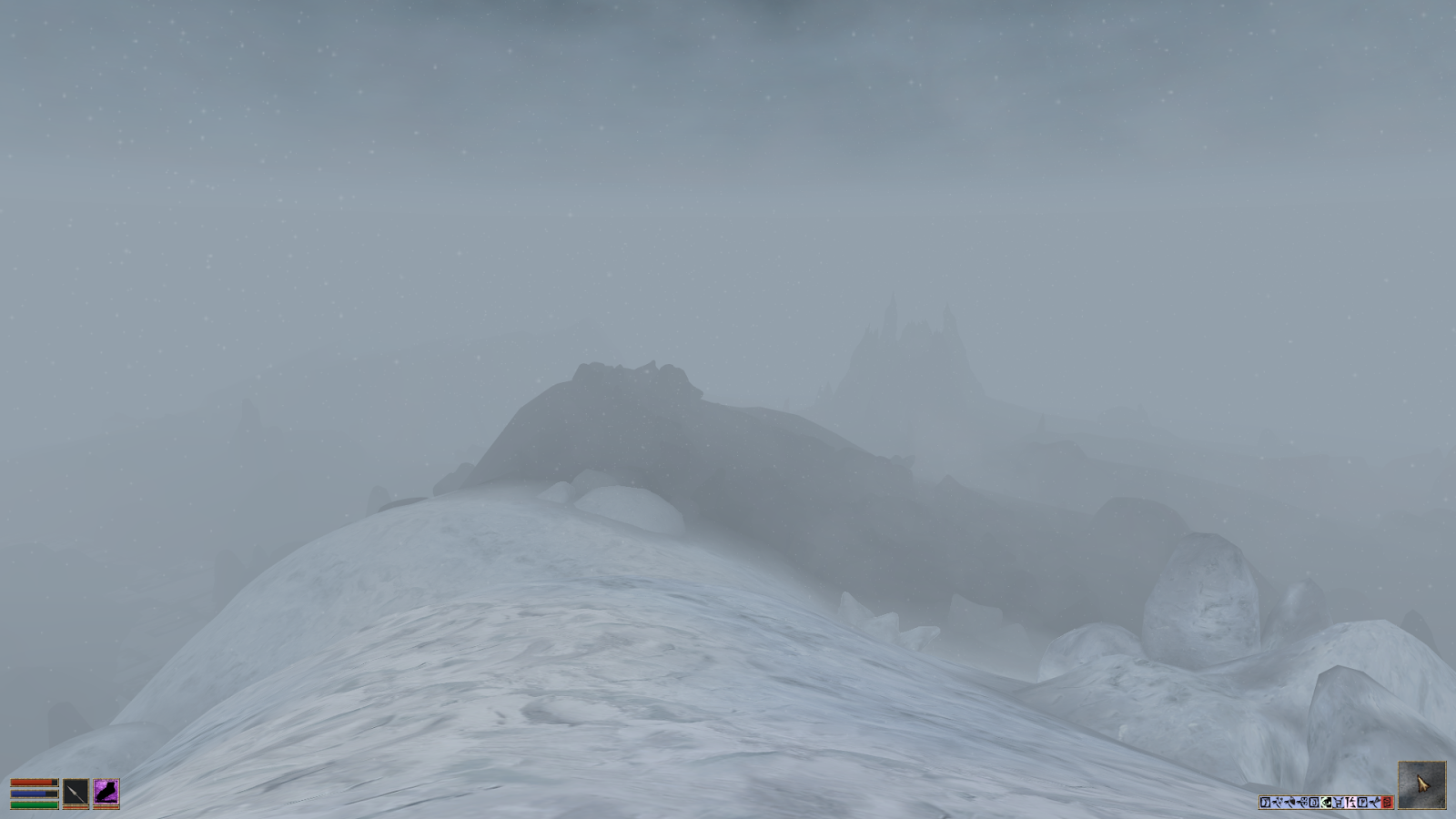 The cavern was the same one I visited several days ago when it asked me a question before allowing me in. Louis had told me the correct answer was 'Ondjage', so I was permitted entrance today. It was not much larger than the lair of the Udyrfrykte and the giant axe sat embedded in a chunk of rock in the middle of the main chamber. 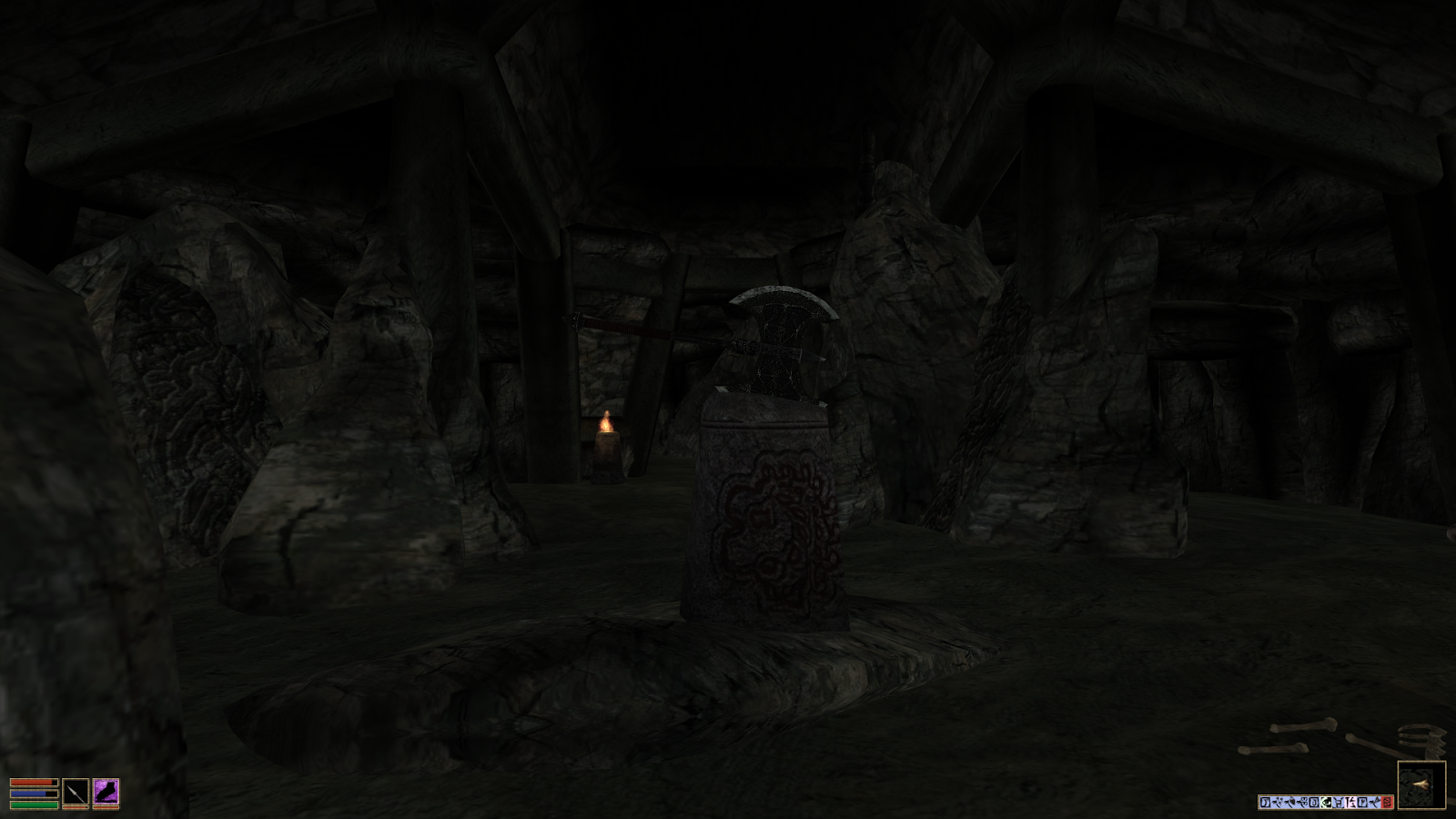 Following Svenja's instructions I grasped the handle of the axe and proclaimed my intention to become Chieftain of Thirsk. As soon as I finished speaking, the axe glowed and I suddenly had a minor Shield blessing, though I could not determine how strong. I took it to be a sign of Hrothmund's approval and grabbed Louis's amulet, which was right by the axe, as I turned to leave.

I still needed to visit the Fort to see about purchasing a disease cure for the affliction the werewolves put upon me, but it was on my way back to the Hall that I had the strangest stroke of luck. A nearly naked Nord came charging over a small hill at me, screaming and waving a two-handed axe. An arrow sent him tumbling down the hill, dead, and on his body was a flask of disease curative. It smelled okay, so I drank it and instantly the constant itching that has plagued me since the fight disappeared and with it, I hoped, had the disease. The Hall was open when I returned and Svenja was inside waiting for me, along with two Nords I never met before. They were eager to uphold the sacred rites of Thirsk, both being quite drunk already. Svenja explained that she could run the day-to-day tasks of Thirsk, but it was up to me to direct the clan. I could send my two drunk hunters out into Solstheim to hunt for pelts, I could order mead from Skyrim, and I could also collect whatever profits the Hall made from the sale of that mead.

As we did not have any mead and I strongly doubted the prowess of my huntsmen I asked Svenja to order mead. What happens to it after that is her responsibility. She directed me to my quarters and mentioned that the three of them pooled some of their money to give me a gift, which was waiting in my room.

The gift was not the snow bear head I had been expecting, but an equally useless Nordic longsword. I stowed it under the bed and went to the guest rooms. The Imperial Cultist prisoner was gone, I suppose she escaped after the  battle in the Hall and the Breton author was in my former room. He presented me with a revised copy of 'Thirsk, A History', which detailed the reigns of all of the mead Hall chieftains. I flipped through it, noting that many had very short rules. It may be best to step down before a Nord wonders why a Khajiit is sitting on the Hall's throne.

I had to see if my disease had really been cured by the wayward Nord's potion, so I walked along the coastline from Thirsk towards the village and took some time to explore a small island that sat just off the beach. I found a locked door, but could see no way of opening it. A mystery for a later time perhaps. 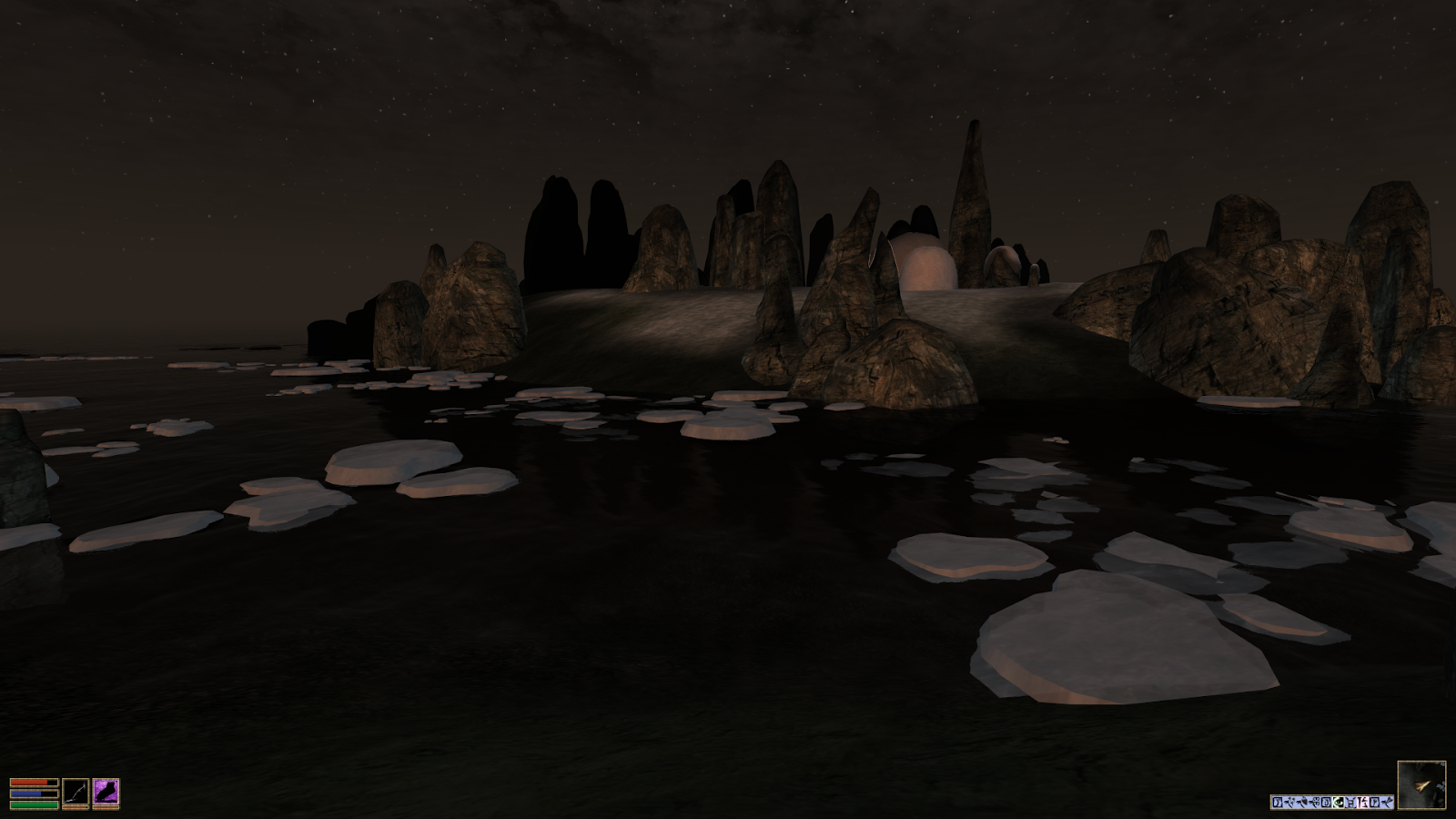 Korst Wind-Eye was able to confirm that the disease of lycanthropy was no longer within me, to my great relief. He named me 'Blood-Skaal', which means I am now a friend of the tribe and fully welcome among them. I was granted a home, my second one of the day, but it was the late Rigmor Half-hand's home and not one I felt comfortable using.

Naturally the shaman had yet another task for me: to complete the Skaal ceremony of 'Ristaag', some sort of cleansing ritual. However, he first needed me to retrieve a magical Skaal totem that is required for the ritual.  This totem of 'Claw and Fang' was in a tomb to the southeast of the village, but I was much too tired to attempt this tonight.

Instead I walked back to Thirsk, past the drunken celebrating Nords and up the stairs to my "quarters", which was really a bigger version of the meager accommodations I was accustomed to at this place. The bed is much better than a pile of furs though and I suppose I will be either traveling back to the Fort tomorrow or taking on the Korst's latest task.

Never any free time and always too much to do.
Posted by Raifield at 1:32 PM
Labels: 3 Evening Star, Day 111, Solstheim, Thirsk