I had been told after receiving my orders that the Legate and her squad would not be leaving until late the next day, but when I woke this morning I found them to have left several hours before. As no one had taken any trouble to track me down (hardly an effort, I own a mansion!) or wake me, I guessed my participation was a "want" and not a "need".

The Nords' 'Jagged Crown' heirloom was at a ruin called 'Korvanjund' neat the crossroads between Winterhold, Dawnstar, and Whiterun, a relatively easy journey almost entirely by road. While on my way out of town I was stopped by a hassled-looking man who introduced himself as Xander, former captain of the vessel 'Argent Raptor' which he lost to an iceberg north of Windhelm. I am not sure why he wasted both our time telling me this.

The walk was cold, but without event. I caught the distinctive tones of Legate Rikke over the wind as I approached the crossroad. 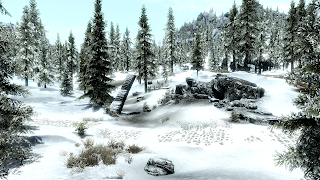 I joined the group and was almost immediately greeted by a boisterous Legionnaire who took my hand and shook it, laughing. I thought the man mad until I looked at him more closely and, to my surprise, recognized Hadvar, the Imperial who led me out of Helgen. He admitted to being relieved to hear that I both had joined the Legion and that I was standing with him today, for he was uneasy around the ruins. I was surprised to hear that, but kept it to myself. Having been in an innumerable amount of ruined fortresses, tombs, and temples I cannot say the prospect of yet another Nordic burial hall provides much dread.

The Legate cleared her throat and another speech began. The virtues of courage and dedication were lauded alongside the update that the Stormcloaks had gotten inside the ruin first. That was met with a few grumbles, but the Legate was quick to eye those with an opinion. Finishing her speech she drew her blade and advanced towards the ruins, her men and I following.

However, she soon stopped and signaled for our company to hide behind some nearby rocks. Peering from around the largest she swore and cursed her luck. The Stormcloaks had beaten the Legion to Korvanjund, even after Rikke's early-morning march. I did not see the problem with this, but the other Legionnaires looked more uncertain than when they anticipated mere bandits. Only then did it occur to me that, with the exception of Rikke and Hadvar, the other soldiers were completely "green", as we used to say.

Fortunately the Battle of Korvanjund was a short one. The Stormcloaks had done us a favor in removing the bandits, but suffered losses of their own in doing so. The few that were patrolling outside were quickly overwhelmed or shot down. 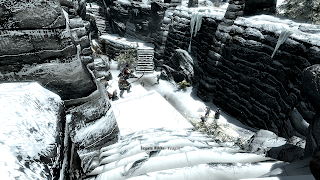 There were more Stormcloaks inside than there were outside, but they committed the folly of grouping together against foes armed with bows and crossbows. Five Stormcloaks lost their lives on the stairs of a large chamber just past the entranceway, four to arrows or bolts, for one of the Legionnaires had with him his family's crossbow. Why the uptight Legate allowed this is a mystery, but a welcome one. 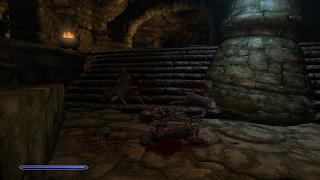 Beyond the large chamber was a narrow two-story chamber with stairways and hallways dotted along its sides. Scaffolding split the chamber into a second story, a perfect spot for archers to ambush us had any Stormcloak thought of it.

The Legate did not like the many avenues of approach and declared it the perfect site for an ambush, unknowingly echoing my thoughts. She mused on the strategy of sending someone ahead to scout for the remaining Stormcloaks, then looked dubiously at her little band. She had left two soldiers at the entrance to guard against the possibility of reinforcements, leaving Hadvar, myself, and two uneasy soldiers with her.

Naturally the "auxiliary" was chosen for the thankless task, but I was glad to hear it. Serana aside I have spent most of my adventuring alone, save for the odd merchant I may have escorted back in the day.

Besides, I had a much greater chance of surviving.

I crept ahead and picked off two Stormcloaks with my crossbow...an odd thing to say given that it takes nearly half a minute to reload it, but the second rebel stood her ground the whole time, shouting and brandishing her shield. I am not sure what she meant to accomplish.

Moving through the ruin we passed the corpses of several Stormcloaks with the unanimated bodies of draugr lying near them. The Stormcloaks must have killed or driven off the bandits, but the bandits had not entered the ruin. Once the Stormcloaks did they must have disturbed the dutiful guardians and gotten caught in an ambush. To our advantage, of course, but one of the Legionnaires stopped and wondered at it, evidently having never encountered draugr before. The Legate snapped at him to stop gawking at 'bonewalkers' and move on, but it confirmed my suspicion that many of our band were untried.

The Legate knew a thing or two about Korvanjund, naming a portion of hallway the 'Hall of Stories' as we entered it. The green soldier spoke up, probably wanting to make himself look useful, and explained that the carvings on the walls were supposed to be stories of the ancient civilization that built the place. I had assumed all (or at least, most) of the ruins were ancient Nordic, but it sounds as if this may not be the case.

Whatever their origin the mechanism for entry was familiar: at the end of the hall sat a huge door with three discs of stone set inside it. At the foot of the door lay two dead Stormcloaks, next to which an ornamental black Dragon's claw of stone lay. 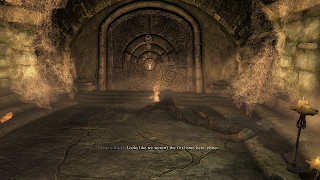 How the Stormcloaks got it wrong, I do not know, for the match was set into medallions at the back of the claw, as usual. This one was Fox-Dragonfly-Dragon and the door opened smoothly once I inserted the claw into it. Had I not I am sure more darts from hidden pipes would have peppered me as it did the two curious unfortunates. The relatively warm air of the ruin rushed past us through the door as it opened and a whirl of stale, frigid air greeted us.

Behind the door was a high chamber poorly-lit in stark contrast to the rest of the ruin. Given that the claw-door does not seem to close again it was likely we were the first to enter in a very long time. This was to the Legate's satisfaction and the unease of everyone else. I whispered to Hadvar that we were likely to encounter strong foes and he nodded, jogging to join the skittish Legionnaires and calm them. 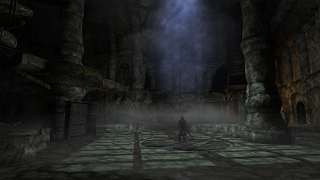 There was no obvious way to continue forwards, so we spread out, the Legate remaining in the center of the chamber, Hadvar and the others on one side, myself on the other. I quickly spied a section of wall with telltale irregular lines and a bit of searching rewarded me with a plug-style switch nearby. Pulling it slid the section of wall aside, revealing a staircase leading further down. I called to the others and we proceeded further inside. 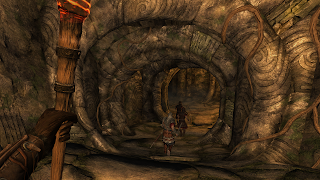 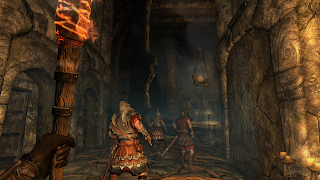 This led to the largest chamber in the ruin, dominated by a platform upon which a hunched corpse sat upon a throne. Having a strong suspicion of what was about to happen I started to circle behind the platform, but Hadvar stepped on to it and examined the corpse closely, yelling that it had a crown and asking if it was the one we were looking for. Foolish.

I had enough time to shout a warning and he leaped back just in time to avoid the sudden lunge of the draugr lord's ancient two-handed sword. Two stone pillars, one on each side of the throne, dislodged their lids as two more draugr emerged, both armored.

As for my part I still have my Dawnguard war axe and the draugr were occupied with my companions. A quick strike to the unarmored back of the one pressing the foolish soldier felled it and I expected the man to run for the exit, but he turned to engage the draugr lord, falling almost immediately as it turned and cleaved his blade in half, continuing into his head. Death was mercifully instant.

I finished off the second draugr guard without much trouble and turned to assist Hadvar and the Legate. Hadvar had retreated a ways back and was on one knee, looking for something in his satchel. I tossed him a restorative and attacked the draugr alongside Legate Rikke.

My hand-axe was not the proper weapon to face a two-handed sword with, so I dropped it and drew my ebony dagger instead. A quick drink of an invisibility draught allowed me to circle behind the ancient lord and bury my dagger in the back of his rotting skull.

The battle for the Jagged Crown was over and at cost: two of the four Legionnaires that entered Korvanjund were not leaving it and all the Legate had to show for it was a dull iron helmet set about with horns. Neither she nor Hadvar seemed interested in acquiring any goods, so I claimed an ebony-faced war-hammer I found leaning against a chest at the rear of the throne. It is not to my style of combat, but it will look nice on the wall at Proudspire.

The Legate tossed the crown (crown helmet?) to me, ordering that I return to Solitude with it. She and her soldiers were going to comb the ruin for anything useful, which a war-hammer, in her eyes, was not. Odd.

I found the two soldiers stationed at the entrance cowering behind a pillar, swords drawn against a foe that did not exist. I laughed, startling them so badly that one dropped his blade. Red-faced, they both started with excuses but I shook my head and suggested they report to the Legate. 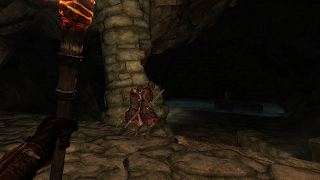 The moon had risen while we were fighting and the sky shimmered with a beautiful green ribbon of light that I have never seen before. It is nice to know that there are still mysteries to discover after so many years. 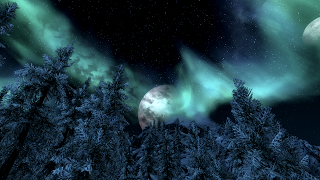 I have stopped at the Windpeak Inn in Dawnstar for the night and will continue tomorrow to Solitude to return this crowned helmet the Nords hold in such esteem. I am curious as to what use the Imperials plan on putting it towards.
Posted by Raifield at 7:00 AM No comments:
Labels: Dawnstar, Day 89, Korvanjund, Skyrim
Newer Posts Older Posts Home
Subscribe to: Posts (Atom)