After squelching about underground in Blackreach for most of yesterday Serana and I found one of our Scrolls and the inscribed cube for Septimus Signus. I was too tired to walk back to Winterhold and spent a surprisingly comfortable night outside of Alftand. I am not sure what Serana did during the night, but I am sure it was not sleep. 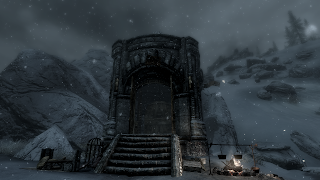 The weather was as poor as it usually is, but the journey would have been uneventful were it not for the Silver Hand who ambushed us near a ruined tower. 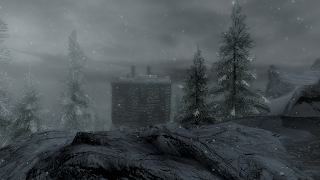 Supposed hunters of werewolves, I have never seen a werewolf in what few Silver Hand compounds I have found myself in. They are seemingly just as happy to assault regular travelers as those "blessed" by Hircine, just another group of bandits, if somewhat better armed and slightly more driven. That does not mean they are any more skilled than the average highwayman. 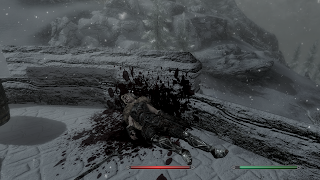 Having wasted our time with them, Serana and I reached the frozen coast by what was probably mid-afternoon, though the weather made it impossible to judge the time. Through the snow and ice in the air we were able to see a large, ruined hall on an island some distance away, but though Serana wanted to take the time to explore I did not and we continued along the shore until Azura came into view. 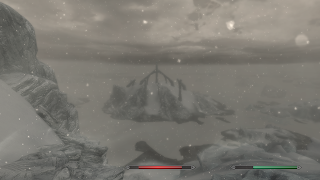 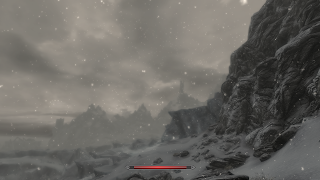 We were maybe halfway to Septimus Signus when the weather suddenly slackened, then stopped altogether. The sun started to shine with an intensity that pained my eyes and caused Serana no end of discomfort. It did make our walk a great deal more palatable though. 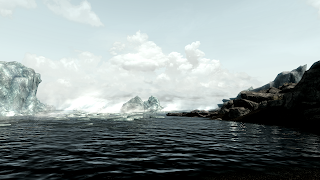 Septimus was still utterly mad, of course. He accepted the lexicon cube with a babbling about Dwemer blood loosening the locks...or maybe hooks? I do not remember. His plan to circumvent what he saw as a requirement was just as scattered. From what I could glean from his rambling, the Dwemer used their blood to unlock the giant cube. What was probably the case was that any one of the Dwemer could unlock the cube, but Septimus took this to mean actual blood extracted from victims.

He claimed that collecting the blood of a Falmer, an Altmer, a Bosmer, an Orsimer, and a Dunmer into a basin he gave me would be enough to "trick" the cube into opening. It is madness, no other way about it. I will not do this thing for him.

As if to validate my decision, a portal of tentacles and eyeballs was waiting for me as I tried to leave. 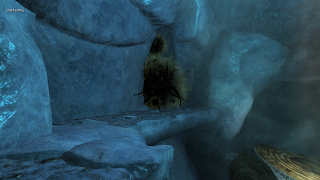 A frightening sight, but not a dangerous one. Hermaeus Mora, Daedric Prince of the Fate, the Unknown, All-Knowledge, many titles are attributed to Hermorah. I was given the honor of being his "emissary", but I declined. I have had far too many encounters with the Daedric Princes and I am not looking to become more familiar. The squirming mass of tentacles and eyes promised me that I had no choice, then disappeared entirely.

Serana had not seen Hermaeus Mora, to her it appeared I was speaking with the wall of ice before me, making her fear I was just as mad as Septimus. I am not however and will be playing no part in his insane blood-collection plan.

Crazy was the order of the day apparently, for while enroute back to the College we were startled by a charging Spriggan...amidst blinding ice and snow, with not even a blade of grass nearby. 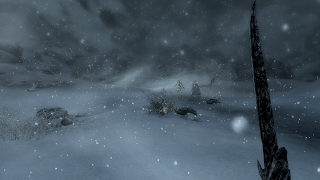 How it came to the frozen north of the province is a bit of a mystery.

We returned to Winterhold after midnight and again I chose the inn rather than the College. Less questions that way. I am not at all looking forward to walking all the way back to Serana's family keep, but it does not appears as though I have much choice in the matter.
Posted by Raifield at 7:00 AM 2 comments:
Labels: Alftand, Day 78, Skyrim
Newer Posts Older Posts Home
Subscribe to: Posts (Atom)